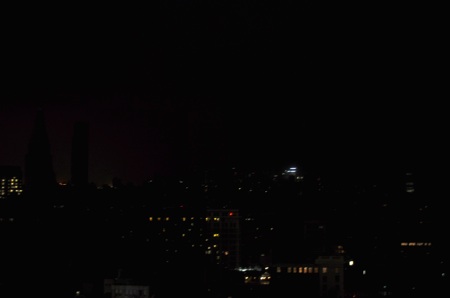 It was a wild night on the East Coast. For several hours, as late as yesterday afternoon, it felt on the ground like the threats and warnings and evacuations might be overblown, a product of a media hungry for Events and glued-to-the-television-worthy programming in the midst of election fatigue. Well. The power’s out on much of Manhattan south of 42nd street, which meant blackness last night as far as the eye could see, the dark hulking shadows of tall buildings. The images of houses along the Jersey shoreline with water to the second floor. The flooded subway tunnels. The several million people still without power. There is a lot of destruction to take in – not even take in, because that implies comprehension – but to climb free of and overcome, to sweep up and haul away and rebuild.

In the immediate aftermath of devastation, people tend to come together. Problems and projects have clear dimensions; we get own to work. And after that? I’ve been thinking the past twelve hours about what art, fiction in particular, has to say about destruction. Some of the most moving passages of ancient texts recount disasters. No matter where you place it on the myth-fact spectrum, the image of Pharaoh’s army on the dry bed of the Red Sea as the waves come crashing down to swallow them whole is a haunting one.

The flood in Zora Neale Hurston’s Their Eyes Were Watching God, or the images of survivors of the atomic bombs in Hiroshima from Shirley Hazzard’s The Great Fire, both put individual drama on hold: a crisis draws out the drama of humanity. It puts our fragility and mortality on display; inhuman acts of self-sacrifice, of trumping instinct with will; and unaccountable moments of resilience and sheer, improbable luck. It’s hard to write about such things in fiction. The wild coincidence, the freakish rescue feel no less miraculous when invented, and we generally distrust the miracle in literature (unless we cordon it off: spiritual, allegorical, magical realist). We crave bare facts in the face of so much emotion. In fact, in the white-hot center of the storm, we might even go numb with shock. Stories come later, a way of imposing order on an event inherently chaotic and meaningless.

To all our friends, family, readers and neighbors in the path of this storm: our thoughts are with you. Let the recovery and reordering of lives begin.