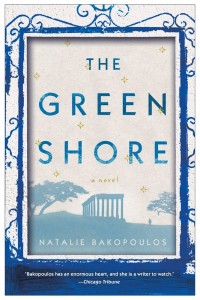 This week’s feature is Natalie Bakopoulos’s debut novel, The Green Shore, which is just out in paperback from Simon & Schuster. Bakopoulos, who we’re proud to call one of our Contributing Editors, has published work in Granta, Salon, the New York Times, Glimmer Train, Ninth Letter, and Tin House. Her short fiction has received a 2010 O. Henry Award, a Hopwood Award, and the Platsis Prize for Work on the Greek Legacy. She is the recipient of fellowships from the Camargo Foundation and the Sozopol Fiction Seminars, as well as a residency from the MacDowell Colony. She received her MFA in Fiction from the University of Michigan, where she now teaches.

In Bistra Velichkova’s recent interview with Bakopoulos, the two talk about the origins of her novel, the role of literature, and whether writing can be taught. In response to a question about learning to structure a novel, Bakopoulos replies:

Originally I did attempt to make a structure. I said, “Well, here is Anna. I need to get her from 1970 into 1971, and then this has to happen.” I was thinking in terms of time and everything felt very forced. Then, I started to think about the character without that structure. Suddenly Anna made a bad choice, and then another bad choice, or a good choice, or whatever, and that was a plot. That’s how I started to structure the novel. It felt more organic. I realized that a character’s behavior creates the plot.

We’re happy to announce that we’ll be giving away a copy of The Green Shore to three of our Twitter followers. To be eligible for this giveaway (and all future ones), simply click over to Twitter and “follow” us (@fictionwriters).

Hurts and Old Feelings: An Interview with David James Poissant