Book of the Week: The House on Salt Hay Road, by Carin Clevidence 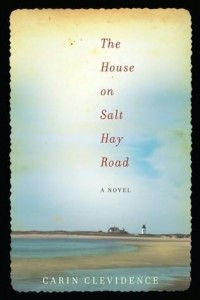 We’re pleased to announced that this week’s featured title is Carin Clevidence’s debut novel The House on Salt Hay Road. Clevidence is the recipient of such accolades as a Ronna Jaffe Foundation Writers’ Award and a fellowship from the Fine Arts Work Center in Provincetown. Last summer she was also a fellow at the Sozopol Fiction Seminars, in Bulgaria, which she chronicled in a photo essay for Fiction Writers Review with fellow participants Kelly Luce, Charles Conley, and Paul Vidich. Her short fiction has appeared in such places as Story, The Indiana Review, and the Michigan Quarterly Review.

In a June 2010 interview, Clevidence said that The House on Salt Hay Road (Farrar, Straus and Giroux, 2010) was written over a span of fifteen years, partly due to time away from the project when her children were younger. The book takes places on Long Island in the 1930s.

In recent review of the novel, contributor Dana Staves begins:

The House on Salt Hay Road, the debut novel by Carin Clevidence, tells the story of the Scudder family and the house they live in. I make sure to mention the house because it is the book’s namesake. And Clevidence handles the house with precision and beauty, infusing it with life and personality and humanity. Indeed, in the opening section of the book, titled “A Floating House,” readers discover that the house used to be located on the bank of the Terrell River. Scudder, the grandfather and patriarch of the Scudder family, was ten years old when his own father won the house in an auction, only to find out that he had bought just the house, and not a bit of the land it stood on. Rather than pay extra, the man waited for the next high tide and rolled the building onto a barge to float it downriver to Southease, the town where the story is set. As a boy, Scudder had waited on the shore for the house to arrive and “remembered watching the house appear in the distance and how strange the silhouette of it seemed, like a boat built by someone with no understanding of water or wind.”

Yet despite this sort of magic, there’s only so much story to a house. The people who live inside it are what make this novel the tender, beautiful work that it is.

To celebrate and promote this new novel, we’ll be giving away three, signed copies of the book to fans of our Facebook page. If you’d like to be eligible for this week’s drawing (and all future ones), please visit our Facebook Page and “like” us.

To everyone who’s already a fan, thanks again! Our Facebook page exists, in part, to feature the work of our writers and to create a casual place to post about what’s happening in the literary world. But our primary goal for everything we do is to put books we love in the hands of readers. Literally, in this case.