The Social Security Administration recently released its annual list of most popular baby names, and surprise! The influence of one particular novel—or rather, series of novels—was quite clear. Reports the New York Times:

[F]lying up the list was an ancient name with modern fame: Cullen, the surname of one handsome bloodsucker, Edward, in the frighteningly popular vampire films “Twilight,” based on the best-selling novels by Stephenie Meyer. 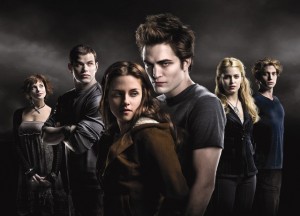 Cullen materialized at 485, leaping almost 300 spots from 2008 for the biggest increase of any boy’s name; it wedged firmly between Braiden and Kason.

Both Isabella and Jacob have been trending upwards for years, including the time when Stephanie Meyers was writing her novels. So did real life influence fiction, or is fiction influencing real life? Perhaps both. I’m all for fiction-inspired names, but can we get some diversity here? How about Phoebe or Holden, or Scout, or even Oliver?