First Looks, January 2013: All This Talk of Love and The Comfort of Lies

Erika Dreifus on two new novels: All This Talk of Love and The Comfort of Lies

Hello again, FWR friends. Welcome to the latest installment of “First Looks,” which highlights soon-to-be released books that have piqued my interest as a reader-who-writes. We publish “First Looks” here on the FWR blog around the 15th of each month, and as always, we’d love to hear your comments and your recommendations of forthcoming titles. For the last year it’s been my great pleasure to head up this series, but in 2013 we’ll be opening it up to the editorial staff. So please drop us a line with buzz-worthy titles you’re anticipating: editors(at)fictionwritersreview(dot)com. Thanks in advance!

I requested an advance galley of Christopher Castellani’s All This Talk of Love (thanks, NetGalley!) with a great deal of interest – and some guilt. After all, this is Castellani’s third novel. We’ve been acquainted for years through Boston’s Grub Street, where Castellani is Artistic Director. All three novels, which compose a chronological trilogy, feature protagonist Maddalena Piccinelli Grasso—a character, Castellani has written, who is much like his mother, “someone who was born into the riches of family and then renounces it.” He continues, saying, “I named her Maddalena and gave her two lives: the one she left behind in the village and the one she built with her husband and children in the United States. What would happen, I wondered, if the two lives collided?” My own question was simpler: Could I truly jump into Maddalena’s story this late in the game (and late in Maddalena’s life)? Reader, I could; if you, similarly, haven’t yet read A Kiss for Maddalena or The Saint of Lost Things, I promise that you’ll be able to enjoy All This Talk of Love nonetheless. In fact, I suspect that, like me, you’ll be motivated to pick up the earlier books, too. 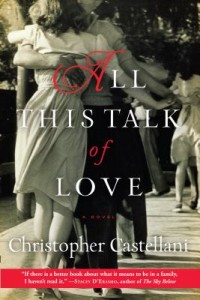 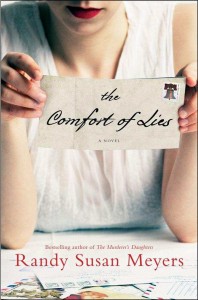 February will be a big month for another Boston-based author I admire, too: Atria will release Randy Susan Meyers’s second novel, The Comfort of Lies. I was directed to read Meyers’s debut, The Murderer’s Daughters, at the urging of my mother and one of her best friends. It took me too long to follow up on the recommendation, but once I started reading, I, too, became a fan. Having sped through The Comfort of Lies (again, via NetGalley) in two days, I’m going to begin calling Meyers a compulsively readable writer. This new book is one its publisher describes as “riveting and arresting,” a novel that “explores the collateral damage of infidelity and the dark, private struggles many of us experience but rarely reveal.” (Just to explain a bit more: the “collateral damage” in this case involves a child and her adoptive parents, too.)