"…just another boring little middle-class boy hustling his way to the top."

That’s what Gore Vidal had to say about John Updike in 2008. 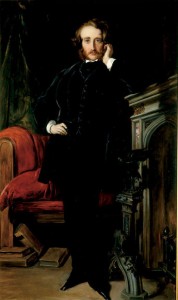 Edward Bulwer-Lytton. Nathaniel Hawthorne called him 'the very pimple of the age's humbug.'

Think that’s bad? Examiner.com’s Michelle Kerns has compiled the 50 best author vs. author put-downs, and Vidal’s comment is just the proverbial tip of the iceberg. Nathaniel Hawthorne called Edward Bulwer-Lytton “the very pimple of the age’s humbug.” James Gould Cozzens declared, “I can’t read ten pages of Steinbeck without throwing up.” Faulkner called Twain “a hack writer who would not have been considered fourth rate in Europe.”

Read the rest at Examiner.com, and don’t miss Part 2, where Evelyn Waugh wonders if Proust was “mentally defective” and Mark Twain says of Jane Austen, “Every time I read ‘Pride and Prejudice,’ I want to dig her up and hit her over the skull with her own shin-bone.”