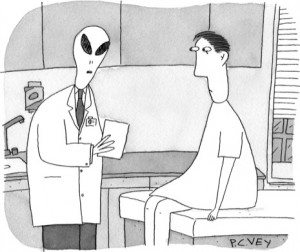 Cody Walker, friend of FWR and author of the fantastic poetry collection Shuffle and Breakdown (Waywiser Press, 2008), has just had his caption selected as a finalist for the New Yorker’s most recent cartoon contest. Congratulations!

To vote for Cody’s caption, or to see the other two finalists, click here.

Walker, who was voted The Populist Poet of Seattle, Washington, now teaches writing at the University of Michigan. Reviewing Shuffle and Breakdown, the Seattle Times wrote: 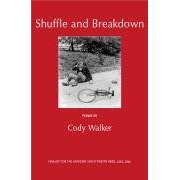 It’s not every poet who can pull off a book that combines a high-brow reference to Walt Whitman (the title, Shuffle and Breakdown, is taken from Leaves of Grass) with an epigraph by Richard Pryor. But Seattle’s official Poet Populist Cody Walker is not just any poet, and the Pryor quote – ‘This ain’t as funny as we thought it was gonna be’ – gives fair warning that readers can expect Walker’s new book (Waywiser Press, November 2008) to pull them in many directions at once. The poems are way funnier than readers might anticipate, and also sadder, and more trenchant, and more biting. Walker’s well-hewn poetic lines combine cerebral word play with verbal high jinks in a one-two punch of poetic bravado.

Thanks for voting! Here’s the contest link again.