"Why did I keep turning pages when it was so hard?"

Amber Wheeler Bacon on learning to read Beckett's "The Expelled."

As a former reading specialist, I spent years observing what good readers did as they read. When a child didn’t come to the process naturally, it was my job to figure out what specific skills they were missing. Reading Beckett’s Molloy trilogy a few years ago helped me understand what it’s like to be a new reader—one who fights to make meaning of text. I was disoriented. Students in the first phases of reading fluency have to hear the words as they read. Reading silently, with just the eyes, comes later. I read most of Beckett aloud to myself in my bedroom at night or in the car at my son’s soccer practice. Hearing the words enabled me to put them in context. 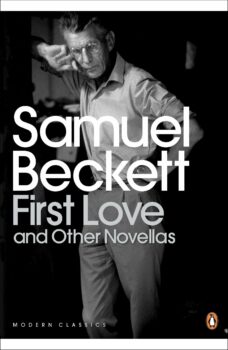 While reading Beckett for the first time, I worked with Alice Mattison in the Bennington Writer Seminars. She helped me think about the parts of a novel or story in relation to the questions a reader has as they move through it. But with Beckett, I had too many questions, so many that I rarely felt I understood the novels. An emerging reader who’s given a book that’s too hard for them will quit. I could have given up. What fascinates me about Beckett is what makes us keep going. Why did I keep turning pages when it was so hard? I began Beckett’s First Love and Other Novellas with this question in mind, and the second story in the collection, “The Expelled,” helped me figure it out.

Beckett’s narrators are charming—in a strange way—and easily distracted. They fixate on specific items. No one can obsess over stones, a pencil, or a pile of clothes in the corner of a room quite like a Beckett character. The narrator in “The Expelled” goes on tangents, too. It was often these detailed tangents that grounded me in the work and kept me reading. In the first few pages of the story, a man falls down a short flight of stairs. We find out later, or it’s implied, that his family “expels” him from his home. As the narrator describes the steps and the act of falling, I had lots of questions. What’s he being expelled from? Why is he being expelled? Where will he go? In the midst of my questions, the narrator sees his hat, “sailing towards [him], through the air, rotating as it came.” This sentence allowed me to pause my reading and collect my wits. I imagining the hat “sailing” toward the narrator. After a moment, I kept reading, but those details were timed perfectly to aid a struggling reader through the text: I needed that break.

The details about the hat also give the reader information: about the narrator’s father, about his history of abuse at the hands of the ridiculous hat, about the narrator’s belief structure. The hat is presented to him as if it has “pre-existed from time immemorial in a pre-established place.” The narrator, like the hat, it seems, are fated to be odd because they have always been so. And maybe most important, the details make us laugh, another thing that motivates a reader laboring through a difficult text. I got the story enough to get the joke, and that gave me confidence to keep going.

The narrator, recovered (mostly) from his fall, then walks down the street. He is “ill at ease” in public, but he has no choice. This discomfort manifests itself into a long description about the narrator’s walk, which—like the hat—is outlandish. He describes the “gait”: “Stiffness of the lower limbs, as if nature had denied [him] knees, extraordinary splaying of the feet, right and left of the line of march.” This description is so specific and bizarre, there’s no choice for the reader but to stop and visualize the walk. It gives the reader another chance to relax into the details and orient themselves into this character’s life, especially as he goes on to describe his “fairly regular” habit of pissing and shitting in his “trousers.” Again, a joke—a sad one, maybe—which I got. I kept going.

In the narrator’s tangents, I also got some implied answers to my questions. I knew who expelled him and why. What’s left was: where will he go? What will happen to him? Who will take care of him?

The narrator goes on another digression about children, whom he would “lynch with the utmost pleasure” and observes a funeral procession. It is then that he enters a cab “of his own free will.” It is this cab that provides the main setting for the rest of the story, transporting the narrator and the reader to its conclusion. 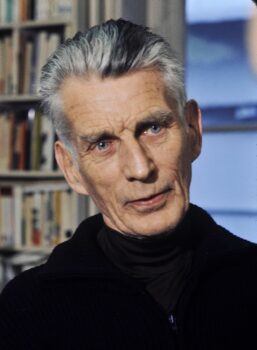 Because it is described at several points by the narrator, the reader sees the cab so clearly. One can even smell its musty odor. It may have been Ursula Le Guin who said science fiction and fantasy writers had to ground the reader with concrete details if they were going to introduce entirely new worlds in their fiction. I needed to be grounded, too, and Beckett gave me the details to help me live in his world for a while. His descriptions of the cab gave me a sense of clarity. I still didn’t know much, but I could see where the narrator was, and that made a huge difference.

I was used to Beckett being hard, so I was a little surprised that the narrator’s day with the cab driver went by as quickly as it did. When the narrator contemplates using the matches to set fire to the cabman’s stables, I thought: I understand this. I totally get it. Well, almost.

Beckett ends the story with more vivid details. We see the narrator remove himself from the cab through the window: “I went out head first, my hands were flat on the ground while my legs were still thrashing to get clear of the frame.” The description is so specific, and Beckett’s been leading us here all along, that with the image of the narrator “expelling” himself from the cab, I saw a mirror image of a newborn “expelled” from its mother’s womb and remembered the original “expelling” and fall down the stairs in the beginning of the story. The man is in a constant state of being “expelled.” Not only am I seeing what’s happening in the story, but I’m finally able to give it deeper meaning. I’m making connections. That’s a huge step for a new reader.

What will happen to the narrator and who will take care of him? He’ll walk toward the dawn, alone, following the sun, like he always does, until he is “down among the dead.” He has his story, which is “like” his other stories, five of which I’d made my way through. Confronted with the next in the collection, I read it out loud—with a little more confidence than the last.