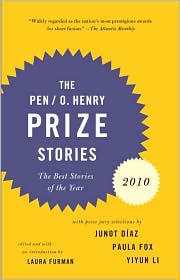 For those of you in New York, Idlewild Books will be hosting a launch party for the 2010 PEN/O. Henry Prize Stories Anthology this Saturday from 6-8pm. FWR is pleased to have two of its contributors represented in this year’s collection: Preeta Samarasan, whose story “Birch Memorial” was published in A Public Space, and Natalie Bakopoulos, whose story “Fresco, Byzantine,” was published in Tin House. Come join us for the reception with several of the authors featured in the anthology.