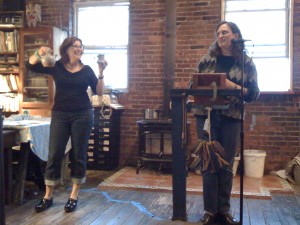 If there’s such a thing as an ordinary reading series, Gist Street is not it. For starters, the monthly readings–the hub of the Pittsburgh literary scene for over eight years now–are held as potlucks in the warehouse of sculptor and tai chi master James Simon, so readers and attendees spend the evening surrounded by Simon’s quirky sculptures (plant people, dogs with human heads…) and, in the summer, when the series sometimes moves outdoors, his chickens and his cats. Novelist Sherrie Flick‘s homemade vegan pastries can be found at no other reading series, and the clawfoot bathtub full of ice and beer is also a nice touch. Another unusual detail: people pay $5/head to come hear emerging fiction writers and poets strut their stuff. As Salvatore Scibona said to the crowd at his reading last night, just after blowing out the candle on the birthday brownie Sherrie made him, “People PAY to come here?! What is in the WATER in Pittsburgh?” We’re not sure what’s in the water, but yes, we pay–and even so, Gist Street is always full. Officially the festivities kick off at 8p.m., but if you’re not there by 7:30, you are out of luck. 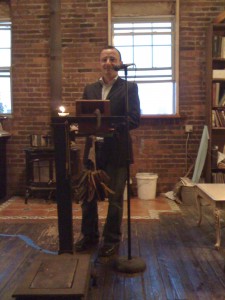 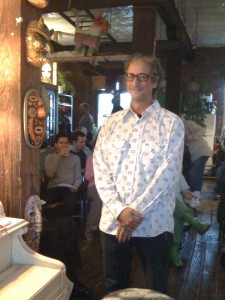 Gist Street is usually the first Friday of every month, but July is special: it’s Gist Street’s Annual Cookout Extravaganza, held on Saturday July 18th under the stars in Jimmy’s plant and sculpture-filled back yard. Master grillers will be on hand to grill up whatever goodies you bring (or you can bring potato salad, pie, wine–it’s a potluck, after all). The cookout bash always spotlights a particular small publisher, and this year it’s Autumn House Press. Novelist Samuel Ligon will be in from Spokane to read fiction, and poet Mary Crockett Hill is coming up from Virginia.

Sometimes there’s a bonfire; sometimes the party lasts until 3 AM. For all this fun, we have Gist Street’s founders to thank: the aforementioned Sherrie Flick, poet Nancy Krygowski, and playwright Rick Schweikert. And Gist Street is easy to find: just go to Pittsburgh’s Uptown neighborhood and look for the giant gorilla. Or follow the directions at GistStreet.org.

826 Michigan's "How to Write Like I Do Series"—This Weekend!