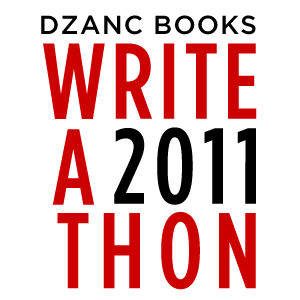 Each year Dzanc Books hosts a Write-a-Thon to raise money for their charitable endeavors–The Dzanc Prize, the Dzanc Writer-in-Residence Program, Dzanc Day, and numerous other service-oriented endeavors that put writers in communities and classrooms around the country. This year’s Write-a-Thon starts today and runs through Sunday.
Though there’s still time to participate!

The easiest way to support Dzanc is to sponsor one of the participating authors, a line-up that includes such writers as Laura Van Den Berg, Matt Bell, Eugene Cross, Kellie Wells, and Brian Sousa. Click here for the complete list.

No donation is too small. And because Dzanc is a 501(c)3 non-profit, your donations are tax-deductible (to the to legal limits applicable). However, Dzanc will also be offering several incentives to individuals who donate, whether via sponsoring a writer or donating directly:

It’s not too late to participate yourself! If you’re a writer and would like to participate in the 2011 Write-A-Thon, please let Dan Wickett know and he’ll get your information listed on their website. Write: dan [at] dzancbooks.org.

If you have any questions, please feel to email event organizer Dan Wickett: dan [at] dzancbooks.org.

The Great Write Off: Dispatch from Ann Arbor – Day One

Book-of-the-Week Winners: The Law of Strings