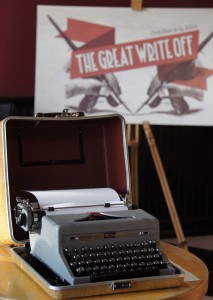 According to our official press release, the goal of The Great Write Off is to bring attention to the important work that the non-profit literary organizations partnering for The State of the Book are doing for and on behalf of young writers, and to raise much needed funds for their operation.

But we also wanted it to be fun! And perhaps just as importantly, we wanted to give people the permission to write. As a writer who also loves teaching and editing and working for FWR, I know how easily my creative work can end up taking a backseat. To say nothing of the hundreds of other things that want my attention–email, bills, laundry, writing letters of recommendation, etc. There’s always a reason not to write, something else that needs to get done. But if you let it, weeks (perhaps months!) can go by.

Back in 2008, I participated in Dzanc’s annual write-a-thon. (Dzanc was an inspiration for The Great Write Off and is one of our current partners). That fall, because of a busy teaching schedule and a lot of freelance work and editing, I’d hardly touched my fiction. But the day of the write-a-thon, I sat down and cleared my schedule. I gave myself the whole day to write. No excuses or distractions! The theme that year was “change,” in part because Obama had just won the presidential election a few weeks earlier on that platform. As I sat at my desk and began to think about change, the first few lines of a story came to me:

When the phone rang my wife and I were slouched on the living room sofa, remnants of wine in our glasses, the television a dull glaze. The turkey had been stripped from its bones and the last of the dishes set to soak in the sink. I would say that the house smelled of small comforts like candle wax and nutmeg and cranberries—which it did—but this was barely two months after my surgery, and my body wasn’t aware of much beyond trying to get my legs to feel right again. 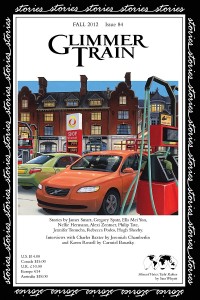 This narrative of “change” developed into a story called “What We Can.” I wrote most of it during the write-a-thon, and in the days that followed began to revise it. A few weeks later, I submitted it to Glimmer Train‘s “Family Matters” contest. And in February of 2009 I was informed by the editors that I had won! The story was subsequently published in the Summer 2010 issue, and since then I’ve had the great privilege to continue working with the incomparable editors of this journal, Linda B. Swanson-Davies and Susan Burmeister-Brown. In fact, they’ve published four more pieces of mine. The most recent one is a literary interview with Charles Baxter, which appears in the current issue. In fact, Glimmer Train is one of the event sponsors for The State of the Book and The Great Write Off. A fitting partnership, indeed.

This is a long way of saying that beyond just raising money for these excellent organizations, we also want The Great Write Off to be an opportunity for people to give themselves permission to write. Who knows what the result could be; the story I produced helped jump start my career. It was a “change,” alright!

But regardless of end result, and regardless of whether you spend today working for fifteen minutes or fifteen hours, whether you can write ten lines or ten pages, we hope that this write-a-thon has allowed people of all ages and ranges of writing experience to feel a part of something special and unique. Something larger than themselves. If we can raise awareness and some money, all the better. 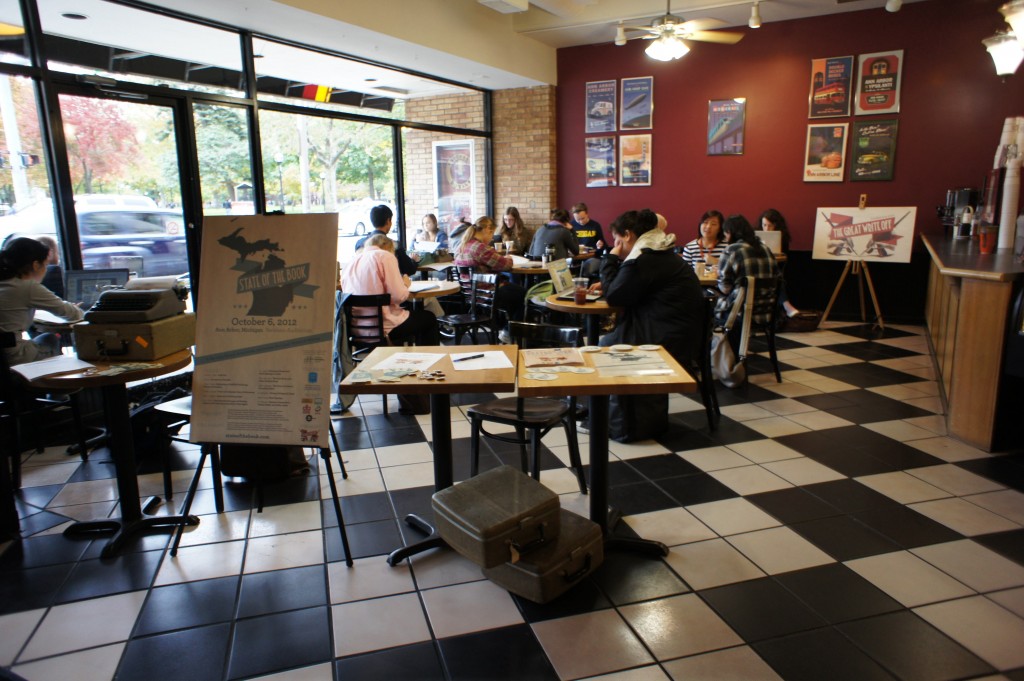 If you’re in Ann Arbor, come out and join the Fiction Writers Review team at Espresso Royale. We’ve been here the last three days, writing on a fleet of old typewriters–Underwoods, Smith Coronas, and Royals–loaned to us for this event by Meghan Forbes, the editor of the all-typewritten literary journal Harlequin Creature, and fueling up on complimentary coffee and Washtenaw Dairy donuts. Espresso Royale has generously allowed us to take over the front of their establishment from 8am to 5pm during each of these three days, and we’ve filled it with young writers working. We welcome anyone to come join us! Our goal of writing in public is not only to inspire young writers to become a part of the literary community we all love, but also to sit among our fellow writers as we, well, write. 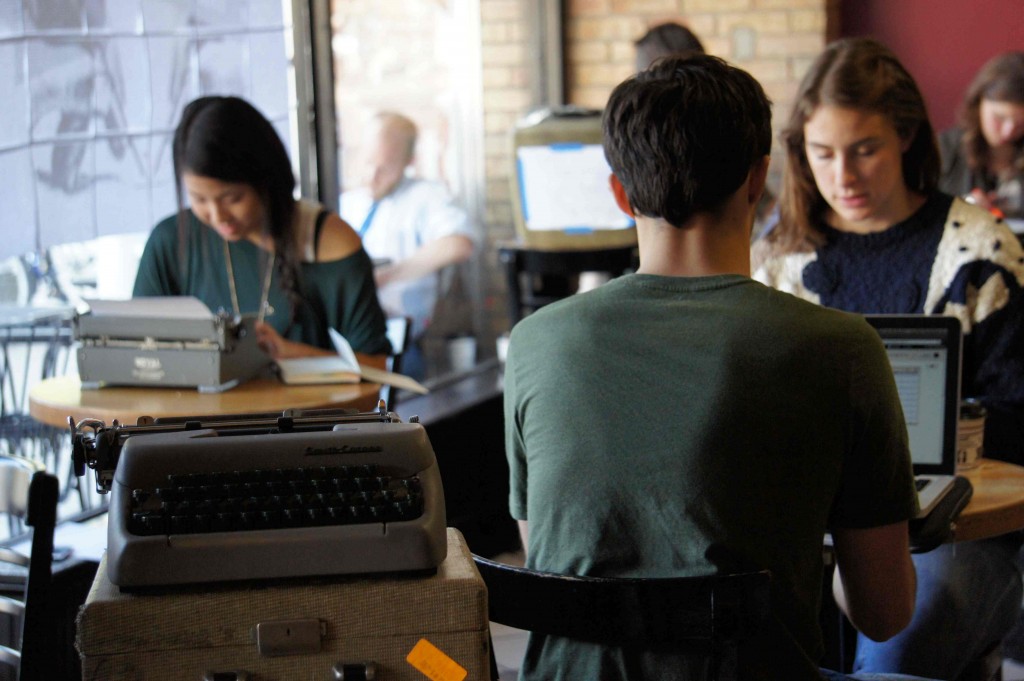