Rolling back prices, indeed—Wal-Mart and Amazon in preorder price war for this season’s new hardcovers 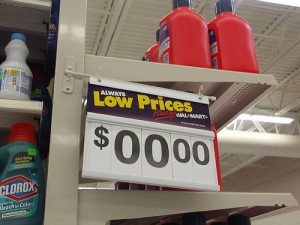 In the Arts section of today’s New York Times, Motoko Rich reports on the “tit-for-tat price war between Wal-Mart and Amazon [that] accelerated late on Friday afternoon when Wal-Mart shaved another cent off its already rock-bottom prices for hardcover editions of some of the coming holiday season’s biggest potential best sellers, offering them online for $8.99 apiece.”

Originally the company had intended to sell these selected books at $10, but Amazon, perhaps feeling threatened by Wal-Mart’s foray into the online retail market, retaliated by lowering their prices on the same titles to a mere $9. So Wal-Mart responded in kind, even if the single penny they knocked off was largely a symbolic gesture. After all, they’re already losing three dollars by selling the Grisham book at this price, so what’s another penny?

Loss leaders are nothing new in business. For example, fast food joints typically lose money on every burger they sell. But they make so much on soft drinks (which cost nothing to produce) that it’s worth the tradeoff. And in the book business this is not entirely new, either. In the deep-discounting price wars of the 1990s, when big box stores like Barnes & Noble and Borders were fighting for customer loyalty, discounts on most new hardcovers ranged from 30-40%. Though not sold at a technical “loss,” they certainly weren’t making any money off these books either. The idea was that they’d make their money elsewhere, once they had the customer in the door. Or, with regards to the 60% of independent bookstores that went out of business during this time, once their customers had nowhere else to go.

Now, to say that the deep-discounting price wars caused the collapse of so many independent stores would be untrue. There were numerous contributing factors, among them the rise of online bookselling. But a lot of independent stores did try to compete head-to-head with Borders and B&N, despite the fact that their discounts on these titles were significantly smaller. And, hence, they lost even more money on these loss leaders than the chains. You see, publishers offer a sliding scale for discounts on books—the more you buy, the bigger the discount. So chain stores, which act as their own distributors, can buy in the volume that rewards them the cheapest unit price from publishers. Smaller stores rarely can. Worse, if independent stores need to get books fast to restock a hot title that’s selling, they can’t go to their own warehouses. Instead, they typically rely on a wholesaler (a middle-man) who sells it to them at an even lower discount in exchange for getting it to them 3-4 times faster than the publisher. However, on a loss-leader title, this might erase all profit whatsoever. But the Indie store accepts this necessary evil because it keeps them competitive and keeps customers coming back. Still, it doesn’t take a rocket scientist to see that this business model is unsustainable. And for many it wasn’t.

But this time the issue is no longer about business competition, where the game is to see who can walk the razor-thin profit margin tightrope without falling off. Now the losses on these titles are so huge that that even big players like Borders and Barnes & Noble can’t compete, let alone independents. Wal-Mart and Amazon might lose approximately $3 on each copy of Grisham’s Ford Country (list price $24) that they sell, but they’ll lose closer to $8.50 on every copy of King’s Under the Dome (list price $35). That’s nearly as high as what customers are paying for it!

And this is what Rich’s article so accurately points out—that the true impact of the price war between Amazon and Wal-Mart (however select and however temporary) might be a change in what consumers are willing to pay for a book. Once you’ve been offered a lower price for a product, you naturally feel cheated when asked to pay more because the worth of the product in your mind has been reassessed. As David Gernert, John Grisham’s agent, is quoted as saying in the article, “If readers come to believe that the value of a new book is $10, publishing as we know it is finished.” More importantly, as he goes on to say, “If you can buy Stephen King’s new novel or John Grisham’s hardcover for $10, why would you buy a brilliant first novel for $25? I think we underestimate the effect to which extremely discounted best sellers take the consumer’s attention away from emerging writers.”

So how will publishing respond? Is this the end of the hardcover? Will more time, energy, and money be poured into those rare authors whose books have “jackpot” potential, in the hopes that they make this “Top Ten” list of Wal-Mart’s? Rich’s article gives the final word to James Patterson, an author whose own book is one of the most popular books preordered on the Wal-Mart site:

Imagine if somebody was selling DVDs of this week’s new movies for $5,” Mr. Patterson said. “You wouldn’t be able to make movies.” He added, “I can guarantee you that the movie studios would not take this kind of thing sitting down.

We can only hope that consumers will see this for the ruse it is: to introduce them to Wal-Mart’s new online endeavor, accepting a loss in one category to make up for it in another. Sadly, writers themselves don’t have other products to fall back on when what they create becomes a loss leader. Or maybe that’s not exactly true. We have other skills, right? I’m reminded of an old joke: “What’s the difference between a writer and a waiter?” Answer: “One letter.”

Though perhaps it’s not all bad news: bookstores will now be able to buy these titles from Wal-Mart and Amazon at cheaper prices than what they would have had to pay the publisher…