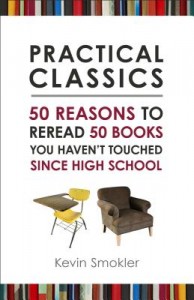 Our newest feature is Kevin Smokler’s most recent book, Practical Classics: 50 Reasons to Reread 50 Books You Haven’t Touched Since High School, which was published last month by Prometheus Books. Smokler is the editor of Bookmark Now: Writing in Unreaderly Times, a San Francisco Chronicle Notable Book of 2005. Called “a publishing visionary” by the Huffington Post, his writing on the arts and technology has appeared in the Los Angeles Times, Fast Company, the San Francisco Chronicle, and The Believer. Smokler has a B.A. in Writing Seminars from Johns Hopkins University and an M.A. in American Studies from The […] 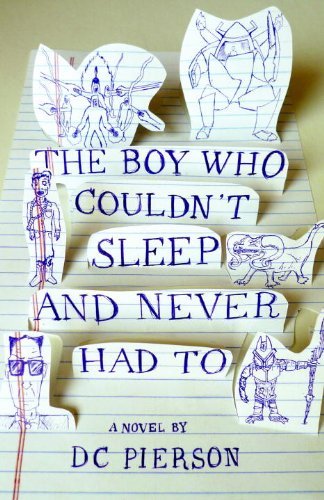 As we’ve seen of late, sometimes professional book reviewers (or, rather, less-than-professional ones) forget that Authors Are People, Too. Well, so do book-reviewing students. Behold this exchange, in which a student turned to Yahoo! Answers to help write his book report on DC Pierson‘s The Boy Who Couldn’t Sleep and Never Had To… and the author responded. Pierson posted the kid’s question and his response on his Tumblr feed, giving the kid some reasons he might actually want to read the book and suggesting strategies for doing it. Here’s an excerpt: I’m not going to sit here and act like […] 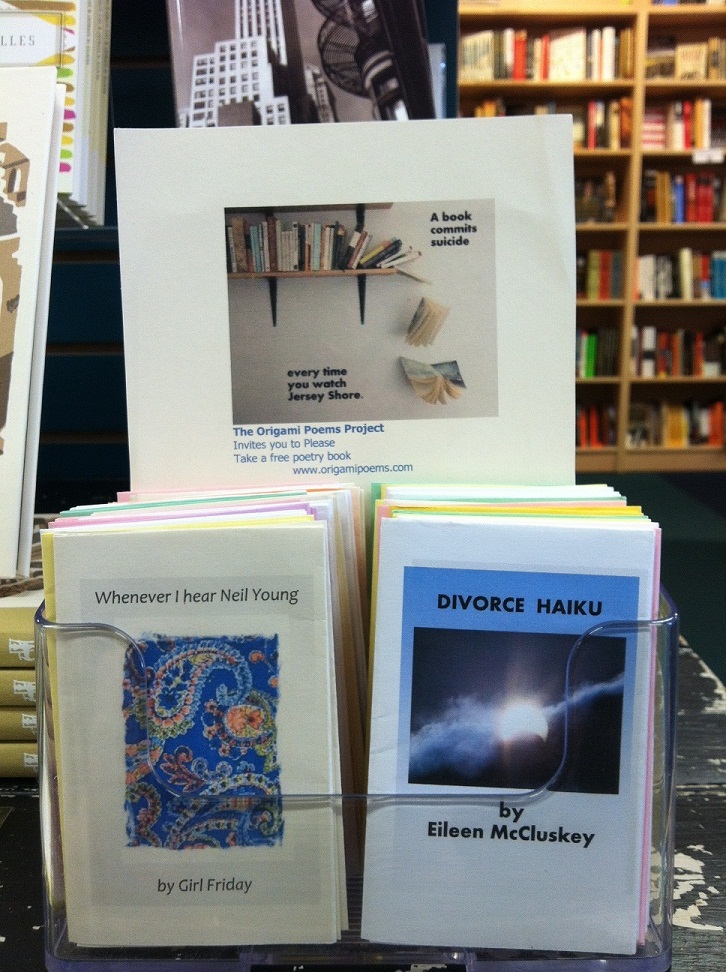 So we know how books are born, how they fall in love, and what they’re up to after the bookstore closes for the night. But did you know that books sometimes think about ending it all? It’s sad but true. What drives them to despair? This display I spotted in Porter Square Books has the answer: The Origami Poems project suggests a poem as a cure—but perhaps you’d better add a short story too, just to be on the safe side? Further Reading: Jersey Shore a la Oscar Wilde Lit and TV have a clandestine affair at the brilliant Slaughterhouse […] Is there anything more disrespectful to a book–and its authors and would-be readers–than burning? Book burnings are inevitably associated with censorship and repressive ideology, from the Third Reich to the more recent Quran-burning controversy. Even without those connotations, burning any book–for any reason–sends a shiver down my spine. But can book-burning sometimes be justified? On Cracked, S. Peter Davis writes about book-burnings that are occurring now, all over many countries–and why: For the past year or so, part of my job has been to walk through library warehouses and destroy tens of thousands of often old and irreplaceable books. […] […]

How to read a book–without reading

Back in high school, I had a book called How to Become Ridiculously Well-Read in One Evening, which described itself as “A Collection of Literary Encapsulations” and contained classic works of literature in short, usually silly poems. For example, The Great Gatsby began thusly: Nick Carraway and Gatsby (Jay) Are next-door neighbors; every day The enigmatic Gatsby gazes Towards a distant green light (Daisy’s). Cute, right? But it seems some people took the book at face value, expecting to catch up on the Western canon in just a few hours. Says one review of the book on Goodreads: I had […]

Some frustrated soul on Facebook has started an “I Hate Reading” page. Even though–in keeping with the “I hate reading” theme–there’s nothing actually on the page, over 475,000 people “like” it. AbeBooks issued the following video, entitled “Long Live the Book,” in response: Okay, so some people hate to read. Some people aren’t book people. But some writers apparently also hate to read. On the New Yorker‘s Book Bench, Macy Halford writes: [William Giraldi] teaches writing at Boston University, and has been amazed at how many of the kids possess a passionate urge to write without also possessing an urge […]

Help save the St. Mark's Bookshop!

New Yorkers know and love the St. Mark’s Bookshop, a stalwart on the Lower East Side. But lately, the bookstore has been struggling to pay the market rent asked by its landlord, Cooper Union. The NY Daily News reports: The co-owners of the book shop, Terry McCoy and Bob Contant, are set to meet with the school’s officials Wednesday to discuss a rent reduction. The last time the two sides met, in early 2010, Cooper Union was unwilling to budge on the rent, which has increased to $20,000 a month. And the New York Times covers the deep sacrifices the […]

The Future of Literary Citizenship: A Review Essay

With the rise of digital culture, teachers must examine how to help students connect with literature all over again, and teachers who are also writers have a particular interest in building students’ “literary citizenship.” Writer and teacher Anna Leahy looks for perspectives on this dilemma in four books by Marjorie Garber, Christina Vischer Bruns, Kevin Stein, and David Orr.

The End of Borders: A Daily Show Perspective

I admit it: when current events become a bit too much to handle, I turn to the Daily Show for some much-needed comedic perspective. Usually it’s politics that’s making me tear my hear out, but here’s Jon Stewart and John Hodgman (a fiction writer himself) finding the humor in the Borders closing. The Daily Show With Jon Stewart Mon – Thurs 11p / 10c Borders Goes Out of Business www.thedailyshow.com Daily Show Full Episodes Political Humor & Satire Blog The Daily Show on Facebook Happy Monday. As John Hodgman would put it, “You’re welcome.” Further Reading: Does the end of […]

You may have already seen this essay by Ted Genoways, editor of the Virginia Quarterly Review, blaming too many MFA programs and their “navel-gazing” writers for the sorry state of fiction these days: But the less commercially viable fiction became, the less it seemed to concern itself with its audience, which in turn made it less commercial, until, like a dying star, it seems on the verge of implosion. Indeed, most American writers seem to have forgotten how to write about big issues—as if giving two shits about the world has gotten crushed under the boot sole of postmodernism. Now, […]