"It’s too much to capture in one book review."

Heads of the Colored People, by Nafissa Thompson-Spires

"They thrive under repeated analysis": Jennifer Audette grapples with the twelve stories that make up Nafissa Thompson-Spires's debut collection, Heads of the Colored People, out now from 37ink/Atria.

It is clear to me from the start that I might not be smart enough for Nafissa Thompson-Spires’ debut collection, Heads of the Colored People (37Ink/Atria, an imprint of Simon & Schuster); that perhaps I won’t be capable of pulling off this review. The first half page of the opening story, “Heads of the Colored People: Four Fancy Sketches, Two Chalk Outlines, and No Apology,” is thick with cultural references—some low, some high; some I know (Sonic the Hedgehog, The Bluest Eye, Drake) and some I don’t (Disgruntled, Fetty Wap). But I want the full picture; I don’t want to be left behind and so, like the nerds in Office Space looking up money-laundering in the dictionary, I’m searching for “trap music,” “Bruh-man,” and Donika Kelly online. I underline. I pencil question marks in the margins. The story is told by a narrator who floats above the action metafictionally hyper-aware and self-conscious. Within the first two-hundred words the reader gets called out with a “you” that seems, at first, like a neutral use of the second person. But it’s not; an accusation rests there, a finger points.

“You would think with his blue contacts and unnaturally blond hair set against dark chocolate mocha-choca-latte-yaya skin—and yes, there is some judgment in the use of ‘you’—that Riley would date white or Asian women exclusively, or perhaps that he liked men.”

It happens a second time, toward the end of the story, in a way that feels stronger in its accusation:

“And you should fill in for yourself the details of that shooting as long as the constants (unarmed men, excessive force, another dead body, another dead body) are included in those details. Hum a few bars of ‘Say My Name,’ but in third person plural if that does something for you.”

The sketches, the outlines, and the no apology hang together with the allusions and the hyper self-consciousness of the metafictional narrator like a sliding-tile puzzle. It’s a story that teaches me how to read it, that teaches me to pay attention, to move the parts around in my brain. It expects me to keep up and I’m thrilled at the challenge and thrilled that Thompson-Spires invites me to believe I’m up to it.

No apology. I’m reminded of something from Toni Morrison that I read years ago after I’d read Beloved—a book that transformed my understanding of African-American history and my understanding of the power of fiction to communicate what facts, statistics, and dates alone cannot. Morrison said she wanted to write without explaining things to white readers, that she wanted to write without apology, that she was writing to and for an African-American audience. Thompson-Spires continues that effort in this collection.

But also, of course, “no apology” has more than one interpretation. It speaks to how little has ever gone in the other direction—from white to black—for the hundreds of years of slavery, for mass incarcerations, for the lack of justice for unlawful shootings/killings of black citizens. In the opening story, anger simmers in the subtext of the fancy sketches; it rises through the two chalk outlines, and spills over in the final paragraph:

“But I couldn’t draw the bodies while the heads talked over me, and the mosaic formed in blood, and what is a sketch but a chalk outline done in pencil or words? And what is a black network narrative but the story of one degree of separation, of sketching the same pain over and over, wading through so much flesh trying to draw new conclusions, knowing that wishing would not make them so?”

For the past two weeks echoes from the twelve stories in Heads of the Colored People have kept me from falling asleep. I try to figure out how to explain the frisson created in my brain by the layers of meaning in these stories and all the ways they’re in conversation with each other and with American culture. They’re the kind of stories where every object, every allusion, and every reference take on secondary and tertiary importance. My brain feels like a jostled seltzer can waiting to be cracked open. It’s too much to capture in one book review.

This is what’s so marvelous about Heads of The Colored People; it’s the kind of writing that’s incredibly accessible and fun to read. Some of the satirical pieces seem almost too obvious at first and their targets too easy. Yet they withstand dissection and questioning. They thrive under repeated analysis such that even the few stories I’d dismissed at first grow in possibility the more I probe. I think of the irritated notes I scribbled at the end of “This Todd,” a piece about a grossly ignorant woman serially dating men with damaged legs. Her complete lack of self-awareness never manages to change—not one bit. I’m still struggling to puzzle through what this story is up to. Might it be read as a stylistic foil to the hyper self-conscious narrator used in the first piece? If so—why? Would that change how I feel about it or change my understanding of it? What else is going on that I’m missing? 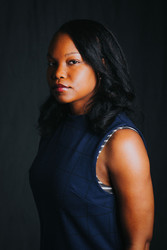 Thompson-Spires gracefully sweeps doubly underrepresented people in and out of these stories, both as main characters and minor—highly educated black women, black female doctors, overweight black people, black men in wheelchairs, women of color running an academic department to the peril of one story’s male protagonist, black men going to graduate school. And yet these stories never feel didactic, never feel that their sole purpose is to make broad statements about what it means to be black in America today even though they are also doing emphatically that. It’s the mode of delivery, the forms of the stories, the use of satire and humor, the meta-fictional qualities, the tone and style chosen by the author that layer the larger view over the unique nature of each story’s characters.

“Belles Lettres” introduces us, if obliquely, to Fatima, who appears in two other stories and who, to me, feels like the bedrock of the collection. This first story takes place in 1991 and develops through snarky correspondence between well-educated, highly competitive mothers of two young girls, Fatima and Christinia. At first the conceit is entertaining and the satire delicious, but before long it becomes stale and I’m eager for the end. However—and I’m just now, as I rewrite this section for the fifteenth time, realizing this—the story that follows, “The Body’s Defenses Against Itself,” offers a subtext that’s created by what the reader carries forward from “Belles Lettres” about Fatima’s mother. When we catch up with Fatima as a 33-year-old (c. 2015) in the midst of yoga poses, she’s distracted by the new student in class, an overweight black woman. Through first person point-of-view we follow Fatima’s thoughts about her body and memories of her fraught childhood relationship with Chirstinia, the only other black girl in her elementary school. Thompson-Spires uses the bodily awareness cultivated during a yoga class as an effective boundary for exploring Fatima’s memories and self-consciousness. Late in the story Fatima pushes herself into a tricky pose, falls hard, and thinks, “I am struck by the clarity of all things. I see colors more brightly, briefly. I understand. Sometimes the enemy who looks like you is a preparation for the enemy who is you.”

Which leads us back in time to 1998 in “Fatima, the Biloquist: A Transformation Story.” She’s in 11th grade and ready to, as she says, become fully black. In prose that I can feel on, and in, my own body, Thompson-Spires describes Fatima prior to this moment:

“Up to that point she had existed like a sort of colorless gas, or a bit of moisture, leaving the residue of something familiar, sweat stains on a T-shirt, hot breath on the back of a neck, condensation rings on wood, but never a fullness of whatever matter had formed them.”

Through Violet, a black albino teenager (which, for the attentive reader, is a clever within-collection reference back to the first story), Fatima learns the art of code switching. Thompson-Spires gives us another powerfully embodied description:

“The thing about the brown top lip and the pink lower one, Fatima had pieced together after what she learned from Violet and what she had learned at school, was that you could either read them as two souls trying to merge into a better self, or you could conceal them under makeup and talk with whichever lip was convenient for the occasion. At school and with Emily she talked with her pink lip, and with Violet, she talked with her brown one, and that created tension only if she thought too much about it.”

In Fatima’s character and the way the stories are told, we get what feels to me like a condensed, inventive bildungsroman of sorts. The moment of change might be hard to pin down and not yet finished, but Fatima’s yearning for it propels the narrative forward. Perhaps the unfinished nature of Fatima’s change can be read as commentary on how black women struggle to claim their secure and rightful space in a still not yet post-racial America.

But there’s still so much I haven’t shown you; I don’t want you to let you go. I haven’t shown you the collection’s ultimate story, “Wash Clean the Bones,” which I’m unable to review because every time I reread it to figure out its magic, I forget to underline and I forget to analyze. I forget to do anything but be left speechless and shaken. I haven’t shown you how damn funny Thompson-Spires’ writing can be or how hard her irony hits middle- and upper-middle class culture. I haven’t shown you all the books she references—poems and poets, too; it’s fiction with a bibliography! I haven’t even shown you how, in “A Conversation about Bread,” she pointed a finger at me and how, if you’re a person who hangs out in libraries eavesdropping greedily on people who don’t look like you (I think I see a few sheepish hands raised out there in the audience), she might be pointing in your direction, too.