"The story is about the web of deaths that constitute the fabric of our collective, social life."

Stories We Love: "A Small, Good Thing" by Raymond Carver

“‘A Small, Good Thing’ is much bigger than it should be”: Douglas Trevor examines the expansiveness of short fiction in this Shop Talk essay.

A boy is hit by a car on his birthday, walks home, seemingly only dazed, and then dies a day later. If asked to write a short story on such a subject, how would you proceed? It would seem logical to imagine the story, in geometric terms, as a closed circle, in which we as readers would be introduced only to the boy’s immediate family: those people most effected by the death. After all, the story is supposed to be short. It might also make sense for the story to end with the boy’s death, so as not to delve into the spiraling horrors of grief and confusion that would presumably follow. To enhance the emotional power of the story without being too obvious, you might linger on the details of the boy’s deteriorating condition and render the parents, in relation to this condition, as more or less numb. The boy too, in terms of his character, might be described as subdued, almost indistinct: emblematic of a certain category, the youthful figure who dies prematurely, which is itself so haunting and sad it would seem to defy the need for character development and detail.

Carver makes some of the moves I have described above, but “A Small, Good Thing” is nearly unfathomably indelible because of the illogical choices the author makes. The first of these is structural and permeates the story on several levels. Carver decides to delimit initially the scope of loss that the story explores by very conspicuously placing characters in the story who do not know the central figure, the boy, at all. This would seem, potentially, to make the story less emotionally resonate, but of course the effect is the opposite. W. H. Auden, in his poem “Musée des Beaux Arts,” begins with a truism with which Carver seems to agree:

About suffering they were never wrong, / The old Masters: how well they understood /  Its human position: how it takes place /  While someone else is eating or opening a window or just walking dully along (lines 1-4).

I assume what haunts most readers’ recollections of “A Small, Good Thing” is the baker, who phones and phones the couple while their son is dying, attempting to get them to pay for the birthday cake the mother ordered. The baker never meets the boy in the story. The baker therefore cannot, and does not, care directly about the boy. But by the story’s conclusion, he comes to care about the parents, warming them cinnamon rolls in his kitchen while the three of them “talk on into the early morning.” While the boy’s parents reflect on what they are going through during the course of the story—Howard (the father) realizing how lucky he has been up to this point in his life, Ann (the mother) commenting darkly after Scotty’s death that the two of them will now be alone—neither one of them has the privilege to say, as does the baker about himself, “I’m not an evil man, I don’t think.” The baker is a reader embedded in the story who is improved as a person by virtue of the narrative that is offered to him that he himself does not directly experience: “‘My son’s dead,’ she said with a cold, even finality. ‘He was hit by a car Monday morning.'” That is the extent of the story from the baker’s point of view, but it changes the baker, which is to say, it is an argument for the power of the short story form. 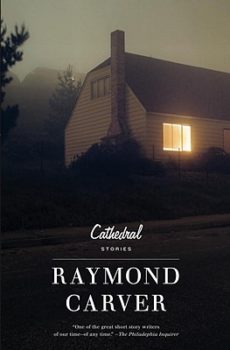 “A Small, Good Thing” is the fifth story in Carver’s 1989 collection Cathedral

“A Small, Good Thing” is—in terms of the degree to which the tentacles of the story extend—Carver’s biggest story, not because it is one of his longest, but because the experience of the baker is in fact the repeated, central experience of the story. When Ann leaves her son’s hospital room after Dr. Francis announces that Scotty has fallen into a coma, she encounters “a Negro family” sitting in wicker chairs in the waiting room. Ann is mistaken for a nurse—for someone who can tell them about the condition of their son, Franklin. But of course Ann cannot do that. Instead, she tells the family what has happened to her (“My son was hit by a car.”), and they in turn tell her what has happened to them (“Our Franklin, he’s on the operating table. Somebody cut him. Tried to kill him.”). When Ann returns to the hospital after taking a bath, she asks at the nurses’ station about Franklin’s condition and learns that he has died. So Scotty’s death is not even the only one in the story. Rather, the story is about the web of deaths that constitute the fabric of our collective, social life. The “small, good thing” in the story is not only embedded in the scene shared between the baker, Ann, and her husband at the end of the story. It is also embedded in the moment when Ann asks the nurse about the condition of a son who is not her son, and in the brief scene where Franklin’s father and Scotty’s mother tell the stories of their sons’ conditions. “A Small, Good Thing” is not so much about death as it is about the efforts of people to relate their experiences of fear and loss to others. The only form of communion we see in this story is this kind of sharing: the description of loved ones to people who do not know the children who are spoken of and will not be able to know them because the children in question will die before such an opportunity will present itself. Carver does not develop the character Scotty, except to make him seem typical in some ways of an eight-year-old boy. He does linger on the boy’s slowly unfolding medical condition, using its mystery to pace the story. Astoundingly, he describes for us the boy’s final breath, and he walks us through the hospital with Ann and Howard as they leave their boy’s body behind. “A Small, Good Thing” is much bigger than it should be. It has more in it, more characters, more deaths, more scenes, than one would assume could be manageable in a story of its length. It is capacious and groping as a result. It feels, like many of Chekhov’s stories (Carver’s favorite writer) somewhat unfinished and sketched. But I love the story because it is a dazzling example of what a short story can do, and why the form is such a fantastic one to work in and study.