"The ampersand deals with what is held apart in suspension and what is joined."

September 8th is National Ampersand Day. J. Alison Rosenblitt on the significance of the ampersand to E.E. Cummings and his poetry, as well as its use in the work of Ocean Vuong.

There can be few more devout fans of the ampersand than the modernist American poet E.E. Cummings. When he assembled his first solo volume of collected poetry, he titled it Tulips & Chimneys. However, the publisher, Thomas Seltzer, who was both wary of the censors and only ambivalently supportive of Cummings’ project, cut the manuscript from 152 to a mere sixty-six poems and published it in 1923 as Tulips and Chimneys.

Overt censorship, or precautions against it, were a nuisance to Cummings, but he had tactics for getting his work past the censors–for example, switching to French (merde) or printing in the Greek alphabet the letters “phi,” “upsilon,” “kappa”: “if Hate’s a game and Love’s a φυκ.” In the end, the suppression of obscenities troubled Cummings less than hostility towards innovation and experimentation. Cummings expressed his feelings about the publisher’s alteration in title by publishing privately, in 1925, a number of the poems excluded from Tulips and Chimneys in a volume titled, simply: &. It was at least a less grumpy gesture than the publication one decade later of a volume titled No Thanks, immediately followed with a dedication page to the fourteen publishing houses who had turned him down.

There was more than flippancy behind Cummings’ insistence on the ampersand. Yet even his modernist peers were only intermittently sympathetic to his idiosyncratic typography and punctuation. T.S. Eliot claimed once that he respected Cummings’ work; however, he offered his esteem for Cummings “in spite of my dislike of his typography.” Laura Riding and Robert Graves took a more favorable view, and in their influential Survey of Modernist Poetry (1927), they foregrounded Cummings’ typography as quintessentially modernist. They also regarded it as a form of protection against the travesties inflicted on texts by editors, since no editor (they averred) would dare to tamper with a text that could not be edited with reference to standardized expectations. Only facsimile reproduction would do!

It is true that Cummings became very controlling of the editorial process and, in later life, would not sign off on publication until fully satisfied by proofs and galleys. Our awareness of Cummings’ obstinacy may even contribute now to misreadings of his texts–because in today’s fonts, Cummings’ typography looks not only stubborn and controlling, but uptight and squashed. Yet this was not the personality of his poetry on the typewriter.

Cummings’ lines take on a completely different appearance when printed in fonts (such as Courier New) that retain the typewriter’s mechanical movement forward, whereby each letter, punctuation mark, or space occupies an equal width on the page. In monospace fonts, his lines hold symmetry and balance. A comma with no space to either side separates each half of a line equally, rather than adhering to the end of one phrase and alienated by a space from the next. The ampersand itself distills balance. In Tulips & Chimneys, it holds Tulips poised against Chimneys in a way that “and” never could.

Cummings’ typography, though jammed together by most modern fonts, originally had poise and breath. His relationship with symmetry and balance, together with his sometimes-overlooked formalism, can underpin a tremendous simplicity which allows him to speak with incredible power about human brutality: 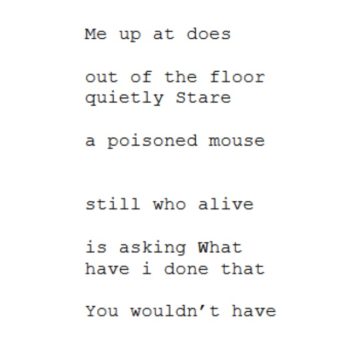 The underlying form of this poem—two quatrains in slant rhyme (abba, cddc)—is made even more formal by a composition, as it were, in two squares: in each quatrain, there are four syllables per line across four lines. The symmetry of the two quatrains is enhanced by their spacing, which places the first and fourth lines at mirror-distance from each middle couplet. It takes incredible control to write serious Anglophone poetry in dimeter—that is, to write a two-beat line without sounding comic or ridiculous.

This powerful aesthetic of balance, symmetry, poise, and breath recurs in the language of the ampersand’s most recently prominent new champion, Ocean Vuong, whose liberal use of & in his debut collection of poetry, Night Sky with Exit Wounds, has attracted the attention of reviewers and literary critics. For Will Harris (Ambit), the ampersand is “Vuong’s master figure,” representing “a sense of corrupted orality.” Yen Pham (Literary Hub) connects the predilection for the pictorial ampersand with the dyslexia which runs in Vuong’s family—E.E. Cummings also, in my view, was mildly dyslexic. In conversation with Kaveh Akbar (Divedapper), Vuong himself observed: “I insist on the ampersand in my writing because, to me, it is a symbol that feels truer to the word ‘and’ than the word ‘and’ itself… It performs the figure holding two words together. So the ampersand feels more like itself than its worded rendition.”

While the visibility of the ampersand as “the figure holding two words together” is a feature specifically of Vuong’s poetic language, this question of what can and what cannot be held permeates Vuong’s work—not only the poetry, but also his 2019 novel, On Earth We’re Briefly Gorgeous. Thus, the narrator’s voice in Briefly Gorgeous: “I never wanted to build ‘a body of work,’ but to preserve these, our bodies, breathing and unaccounted for, inside the work.” The tightest hold may be motherhood, as in the pregnant mother in flight as a refugee (in Exit Wounds): “Sometimes I feel like an ampersand,” as she tethers his father to the son she carries. Or, in “Ode to Masturbation”: “& sometimes / your hand / is all you have / to hold / yourself to this / world & […]” 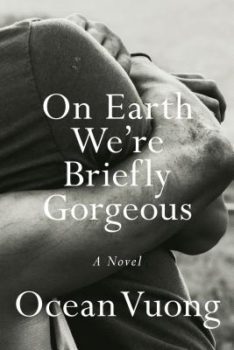 The ampersand is not the only mark of punctuation of significance to Vuong. In Exit Wounds, a smile is “[a] white hyphen,” and in Briefly Gorgeous, the narrator’s boyfriend Trevor is marked “with the scar like a comma on his neck, syntax of what next what next what next.” Vuong’s various imageries of punctuation and syntax are echoed in the inner lives of his characters and his speakers. The ampersand deals with what is held apart in suspension and what is joined. His narrator in Briefly Gorgeous asks: “Do you ever wonder if sadness and happiness can be combined… [and] you didn’t have to live on one side or the other?” Likewise, the ampersand deals in symmetries—like the Monarch butterflies (those most symmetrical of animals) which appear briefly in “My Father Writes from Prison” (Exit Wounds), and which trope the beginning and the end of Briefly Gorgeous.

Donnalyn Xu (Honi Soit) points out that the ampersand is a ligature and therefore an “act of binding.” Xu characterises Vuong’s ampersand as the evocation of a “natural parallel”: “[t]he two fragments on opposite sides of the ampersand exist through each other,” embracing visual closeness and at the same time “a feeling of separation in the heavy placement of the ampersand.”

Written out in letters, “and” suggests a sequence, a linear progression, a continuance from previous thought, or (as Xu observes) a consequence. The ampersand juxtaposes and balances what precedes and what follows; what is present and what is former, here and there, now and past. For both Cummings and Vuong, the ampersand activates an aesthetic of balance which, taken more widely in their work, is as much a way to speak of brutality as of beauty.