"In Briefly Gorgeous, pain is never far from love and the past is always twinned with the present."

From the Archives: "Art needs to be honest. Sometimes, it’s the only pure honesty you’ll get all day." Emily Nagin reviews Ocean Vuong's debut novel, On Earth We're Briefly Gorgeous.

When we say a novel is good, what do we actually mean? That it’s well-plotted and smartly structured? That the characters are nuanced and clearly drawn, their actions motivated? Do we mean the dialogue is realistic and the setting well described? Do we (sometimes) mean that it is heavily marketed and glossy, a book with a big name and obvious money behind it? Ocean Vuong’s fiction debut, On Earth We’re Briefly Gorgeous (Penguin Press) is all of these things, yet it isn’t good.

I’m not using that word casually. This isn’t “great” like, “Man, that hamburger was great.” I’m using “Great” with a capital ‘G’. As in, “This is one of the Great Books.” As in canon. As in, we should all be reading this novel now, because it’s going to be a classic.

About once every four years, a book sweeps me off my feet, makes me wild with excitement, gives me new ideas about how to approach my own writing. And when that same book has the power to make me fall in love with its characters, walk around with them humming in my head as I shop for groceries and watch Netflix and pay my bills, then I feel safe calling it Great.

You know a novel is great when it gets stuck in your head like a song.

Flickering between wartime Vietnam and early thousands Hartford, On Earth We’re Briefly Gorgeous explores themes of race, nationality, gender, and the question of what constitutes a family. The story follows Little Dog, a poet in his early thirties with ambivalent feelings about his escape from his decaying New England town. In a novel-length letter addressed to his mother, Hong, Little Dog traces his own life story, which is inseparable from those of his mother and grandmother, Lan. After immigrating from Vietnam and settling in Connecticut, Little Dog’s family struggles to establish and understand itself in a new country while the unspooling traumas of war, mental illness, drugs, and American racism threaten to destroy them. But these same forces also pull Little Dog, Hong, and Lan closer to each other, forging a deep loyalty that keeps them afloat.

In Briefly Gorgeous, pain is never far from love and the past is always twinned with the present. “When does a war end?” Little Dog wonders. “When can I say your name and have it mean only your name and not what you left behind?” Vuong’s characters walk side by side with ghosts, and his writing mimics the nonlinear nature of memory: One moment we’re in Little Dog’s childhood apartment, watching him pluck the gray strands from Lan’s hair. The next we’re in a Vietnam bar, watching Lan fall in love with an American GI. Nothing progresses in a straight line; everything links back to itself. While this quality can make the book feel plotless in the moment, the story is tightly woven in retrospect, much like life itself.

That’s the thing about Vuong’s novel, the sticky quality that makes the story latch on and take hold in your mind: it feels real, intimate as a conversation between close friends. Part of this realness comes from Vuong’s undeniable eye for detail. He evokes the look and feel and smell of a place so clearly and unselfconsciously that you can’t help but be there, in the moment with him. And there’s also voice. Darting between lyricism and chattiness, Little Dog’s voice is like the voice so many writers I know, elegant and hilarious and utterly undeniable. And while it may not seem impressive that a writer in his early thirties has successfully evoked the voice of a writer in his early thirties, Little Dog’s characterization goes beyond accurate or well drawn: he feels real.

I could be sitting across from him at a bar, hearing this story. It’s a rare blessing to forget that a character is a character. When Little Dog describes riding his first bicycle, a hot pink rattletrap, my first thought was not, This is a very nice description but Oh my God, me too! Because my first bike was loose jointed and rust speckled, rescued from the trash, and for a tenth of a second, I honestly forgot that I was reading a novel. I was just in the moment with Little Dog, feeling the spark of an almost-shared memory, that spooky, magical synergy you feel at the beginning of a friendship you know will last.

You know a novel is good when you forget it’s fiction.

So much in Briefly Gorgeous possesses this feeling of rightness. Its take on the world today, the world that those of us in Vuong’s generation grew up in, is deeply, often painfully, accurate. Little Dog and his friends love 50 Cent and green apple Jolly Ranchers. They’re ride or die for Sprite (fuck Coke). They love dirt bikes and joints, guns and OxyContin. They love the chemically sweet, the artificial, the deadly.

And they love each other. When Little Dog falls in love for the first time it’s the real thing, heady and complicated, a negation and a filling-in of self all at once. “Did you ever feel colored-in when a boy found you with his mouth?” he wonders.

But this is America in the early thousands, and opiates are sweeping the country. As Little Dog’s friends begin to succumb to the epidemic, the novel’s structure becomes correspondingly fractured, more a eulogy than a story. I was reading Sam Quinones’ Dreamland at the same time as I was reading Briefly Gorgeous, and though Dreamland captures the facts of the opiate epidemic in granular and horrifying detail, Briefly Gorgeous gets to the emotional heart of it.

“Did you know people get rich off of sadness?” Little Dog asks. “I want to meet the millionaire of American sadness.” 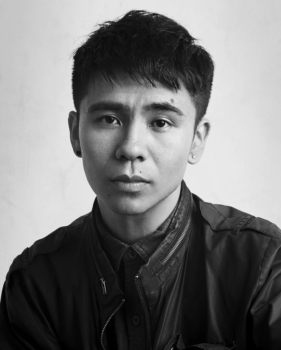 You know a novel is great when you grieve with the characters.

Art needs to be honest. Sometimes, it’s the only pure honesty you’ll get all day. Briefly Gorgeous is, above all, a deeply honest book. Sometimes sad stories feel like emotional tourism, or gratuitousness dressed up as gravity. Vuong’s book is neither of these things. It’s a vaccine, drawing strains of the world’s toxins and, in exposing us to them, helping us bare and survive them. Sometimes you need to see the things that have been making you ache written down on paper to know you aren’t crazy, that you aren’t the only one who feels this furious and helpless.

As Little Dog says: “You and I, we were Americans until we opened our eyes.”

I can’t help thinking this should be our new national motto.

Look, I know sound like an evangelist for this book. But that’s because I feel evangelical. On Earth We’re Briefly Gorgeous will hurt you, but it will also make you feel seen. It is a family history, an elegy, a love letter, an extended hand. It’s exactly what we need right now.