Why buy the cow? 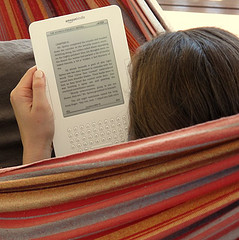 The Los Angeles Times Book Section reported back in May that the top 10 e-books on Kindle are all free. Not surprisingly, Steig Larsson now holds the top three slots with his Millennium Trilogy, which range between $7.15 and $9.99.

That still leaves plenty of free books in the top tier. The current top of the free e-book list is a debut novel, The Heir by Paul Robertson (Bethany House). It’s a page-turner, the kind of book I’ve torn through at the beach or on cold winter evenings, when it’s pitch black outside by 4 p.m. Robertson has come out with a book a year for the past four – The Heir was published in 2007. His three subsequent novels are all for sale as Kindle editions, priced at $6.99 for the 2008 and 2009 books, and $9.99 for his most recent. The free debut novel feels like a pretty shrewd audience-building tactic for a writer who can write a novel a year.

The economics seem to make sense if you’re hoping to hook a readership based on the ability to deliver more while you’re still fairly fresh in their mind. But what if it takes a writer ten years to finish a book? What are the economics of free versus $9.99, or somewhere in the middle? Free buys word of mouth, which may create the buzz needed to sustain a book long enough to find its audience.

To some extent, the reader every writer is courting isn’t so much short on cash as short on time, bombarded on every side by an endless stream of options, without the energy required to pare down the list. Book Review sections of newspapers used to help with that, but the section is endangered at best in most local papers, if not a casualty of shrinking profits. Many authors and publishing houses now regularly post a story from a new collection or a free first chapter as a way to entice while still protecting both profit and the value of the art. 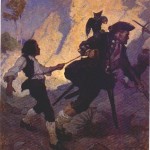 One final, intriguing twist, among the top ten free e-books this week are classics of fiction, The Adventures of Sherlock Holmes (#2), Alice’s Adventures in Wonderland (#3), Pride and Prejudice (#4), and Treasure Island (#7). Perhaps the free e-book is stepping into the role of library for the tech savvy? There’s something heartening about imagining a new generation discovering Long John Silver or “The Adventure of the Speckled Band” on their morning commute, even as living authors weigh the merits of giving away their labors in order to develop future readers.