The first morning I woke up and found myself a US resident, I threw on some clothes and headed for the nearest coffee shop to celebrate my new identity with a steaming cup of Americano. Before I reached the place, however, I had to walk around a blonde toddler squatting on the sidewalk in front of a pink castle she’d drawn. The big chunk of chalk was still in her hands and she was peering down at her drawing closely, in case the balcony wasn’t crooked enough and she had to bend it some more.

My first impulse was to grab her under the arms and hurl her onto a bench before something with too many legs crawled up onto her. And then I looked at the sidewalk again: clean, broad squares flanked by flowerbeds. The other side, too. Spotless pavements. Virgin canvases for imaginary worlds.

Where I come from, the sidewalks—at least the few that don’t have cars parked on top of them—are speckled with dead cockroaches, cigarette butts, empty beer cans, bottles, used needles, dog shit and every so often a stray tooth from the latest fistfight between protestors and police. In my hometown children are not allowed to squat and touch anything outside their living room.

In Athens, a writer will use the word sidewalk or pavement, pezodromio, and the reader will invariably think of something dirty, disgusting or illegal. In uptown Minneapolis the reader can envision pink chalk castles and happy toddlers—unless she’s a resident alien with a foreign tongue.

In Greece, as in most European countries, it was my generation’s duty to speak English fluently and to translate for our parents what they didn’t understand when traveling. I don’t even remember learning the words; I guess I absorbed them with the mashed bananas and Greek baby talk of my early years, and then later while spending afternoons listening to my parents’ rock and roll LPs (relics from their rebellious youth against the military junta) or watching TV, marveling for hours at the novelty of private channels, American sitcoms, and soap operas.

As I grew older, I went beyond the call of duty and learned the language well enough to earn a Cambridge degree and a teaching certification. In fact, the only way I survived my adolescence was by reading American magazines, watching American movies without subtitles, and flirting with Americans each summer on the islands. I knew the language. But I hadn’t lived the language. I could go through the pages of a book, but I couldn’t go through the emotions of the native speaker. I knew what a sidewalk was, but I could only see a grimy stretch of stone and trash when the Midwestern author meant a row of pink castles.

Of course, if I couldn’t read English I’d trust a translator to do the hard work for me. I’d expect to find a footnote hiding in the margins, an explanation on the sidewalks and whatever other detail that might confuse me as a foreign reader. But the big trap there, bigger than the cracks on Athens sidewalks, is that the translator may have lived the language for so long that he’d forget those little differences, the slight fluctuations of tastes and smells and colors. So the footnote wouldn’t be there anyway.

In the end, though, it doesn’t matter: I came here to write the footnote myself, to walk on the chalk drawings with my own two feet, to live the language that I thought I’d known for so long. And when I lifted my eyes up from the sidewalk to the sky, another epiphany came crashing down on me. Oh, the endless sky, the baby blue tones and the cotton clouds. I turned to my Greek friend: “Do you remember those long pages of nature in Steinbeck? I skipped all of them. I thought life was too short to read about skies and the color of dirt. But now it all makes sense. You want to write about this sky.” I made a mental note to go back to my old American novels and give them a second chance.

And now that I know the happiness of seeing the first spring flower after a long dark winter, I find myself wanting to read and write about this happiness—about the warmth of the sun on your skin, about the birds and the skies and the trees. I can hardly restrain myself, thinking of my Greek friends rolling their eyes over my long emails and stories about the cardinals (they had to google that one) outside my widow.

Recently, when my editor at Greek Cosmo asked for a piece on “green dating,” I suggested a picnic to enjoy the new season. But the next day I woke to an angry Skype call with the following “suggestions”: A) There are no parks in Athens where you can have a decent picnic; B) Greeks had had their spring right after Christmas and by now they were bolting to take cover from the scolding sun; and C) what’s wrong with me? Why was I suddenly talking about nature all the time? Life’s too short to waste your words on the sky and the color of dirt. She simply couldn’t understand my new fascination with this place.

The words of others 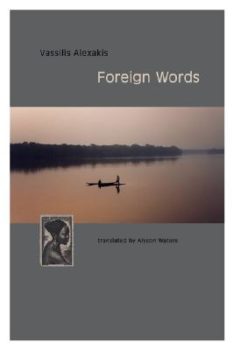 Vassilis Alexakis had a similarly strange affair with language. Though he was born and raised in Greece, a French scholarship (and the military junta) moved him to Paris and has kept him there for more than forty years now. He wrote his first four novels in French, his fifth and sixth in Greek and then translated them into French himself. He’s been shuttling back and forth between two languages his whole life. In a 2002 novel, Les mots étrangers, titled Foreign Words in English, his main character, a bilingual author, writes that everything around him has two names, one in Greek and one in French. But there’s something more: everything around him has two qualities, one that stems from the associations of the Greek word and another that’s bound up with the French. He gives an example: onion. The Greek word (κρεμμύδι) reminds him of the finely chopped onions his mother stir fried with olive oil and meat, but the French one (oignon) calls to mind a smiling vendor in a Parisian street market.

Even if you’ve lived the language, it still finds a way to muddle up the narrator in your head, the one that’s always just a syllable or two behind your eyes while they scan the printed pages of a book. Even a cookbook. An onion can taste and smell differently, depending on the letters that give meaning to the sounds, and it can make you homesick or smile depending on the people and the memories you’ve linked these letters with.

And even then, you have to take into account the people with whom you live the languages. My American husband, who pronounces “apple” differently than I do (he’ll never get it right; he just doesn’t have the advantage of my strong accent) is learning Turkish and Serbian these days. To teach himself the words he sticks post-it notes on everything from our fruit to the containers in our fridge. All of them in two languages. Our light switches have multiple names. Our cupboards are covered with colorful post-its, the words for each object varying in accents and intonations. Sometimes guests ask if a Turkish word on our door is Greek and then end up staying another two hours, talking politics and history. My father still wonders why on earth my husband bothers with ta Valkania (the Balkans), and in his phone calls the word comes out sounding offensive, something shameful, the part of my heritage I’d like to sweep under the rug. In my husband’s presentations, though, the Balkans sound noble and exotic, and I carry that heritage around proudly, like a nametag, during the receptions afterwards.

Reinvent yourself with a dictionary

The same character from Alexakis’s book claims that French makes him feel younger. He learned the language when he was twenty-four, so Greek has had a longer history in his life, makes him feel older.

I find that I feel cooler, smarter, more cosmopolitan when I read American books. It’s the language of pop culture and technology. It brings with it images of long-loved movies, Apple products, and MTV videos from my childhood. In my mind it’s always fresh and different, a language my parents never spoke, the language my friends and I used when we didn’t want the grown-ups to understand us, the language that’s bleeding into my Greek articles and expressions day by day.

And it’s not just my new-found love of nature that’s to blame. I stage my stories for Cosmo in different surroundings; my narrators have revelations while driving and not in the metro or a bus; the long-distance relationships can be in the same country; the punch line in the end comes straight from classic movies without translations that invariably ruin the effect. I use my new identity as a US immigrant for the fashion advice in Marie Claire and get away with extravagant suggestions, because our readers think of Greek Americans as they see them in the old movies—coming back to the dark third world with bright clothes, green money, and big hats.

And so, I realized one day over my laptop, the transformation was complete: I write in Greek with an American identity and I read in English with a Greek accent. Though the truth is, I still like me more as an American reader than a Greek one.

It’s like reinventing yourself through a dictionary, learning new words and picking up (or perhaps pick-pocketing) new expressions from the books you love, attaching yourself to them, dressing up in them, wearing them in, wearing them out. And when you have enough of them to describe yourself in your new language, you suddenly sound like someone else, someone that you’d like to meet, if you ever had a chance to visit one of those countries with clean sidewalks.

Because we learned English from textbooks, though, words have no bad associations. “Devastating” doesn’t have the baggage that it does for native speakers—no walls painted black, no wailing or gnashing of teeth. It’s just a new word we can freely use to describe anything from a break-up to a broken nail. If anything really devastating happened in our lives, it would probably have a different name, something Greek, something so laden with bad associations that if we’d really have to spell it, we’d spit on our chests three times afterwards, like the old village women who believed in the “evil eye.”

But in the end, the nostalgic Greek reader, the hip American, the old Balkan, and the young French one all blend into a single knot of voices. You find yourself bending over pages with different sounds—sometimes even different alphabets—with the same love and curiosity. Words with different meanings and sets of feelings make your text richer, even if confusing. That little narrator hiding in your head has so much to say, so many sounds to share. The bilingual echo only amplifies the impact.