“Every story is about coming of age.”

My mother-in-law recently complained that so many of the books I recommend concern young people. Because I am writing my own coming-of-age novel, I can’t get enough of teenage protagonists.

We can all identify with the angst of adolescence, the raging fever of the future’s possibilities. But youth’s familiarity proves both strength and liability. How much do we really want to relive the out-sized importance and wild mood swings of decades past? Lately it’s the elderly who fascinate me. Although I’m not old yet, I hope to get there by and by. Lucky me: a slew of new books provide a crystal ball view of the mature end of life’s continuum.

The reflection and deliberation of long-lived characters are antidotes to the impulsive, impatient, and achingly self-conscious melodramas I face as the parent of a teenager. When I started empathizing less with the teen protagonist of my own novel and more with her parents, I realized I needed a break from the drama. Bring on the octogenarians.

The transition from adolescence to adulthood is but only one of many.

In traditional Bildungsromans—coming of age novels—youth struggles to overcome a series of obstacles to forge identity. The big reveal: decisions have consequences.  Our mistakes land at our own doorstep.

Four recent works of fiction feature protagonists far over the hill and nearing the end of the slope. They obsess over details of the past. They fret. They fluster. They take bold stands. In short: not too different from the teenage set. The difference: they’ve got a lifetime of experience to back the drama, which has the potential to make them even more interesting than all that unformed clay of youth. Growing up isn’t just for teenagers.

“It was dangerous to think the past was all she had, her life already defined, when every day was another chance.” 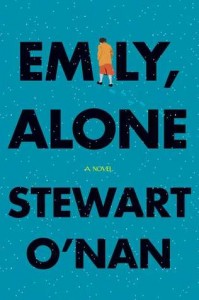 At the opening of Emily, Alone, Emily has just become a widow. For her, being alone represents both lack—no more husband—and strength—managing on her own. A change this significant provides ample room for reinvention, and Stewart O’Nan seizes the opportunity. ­

A spry, no-nonsense octogenarian Pittsburgher, Emily straddles present and past: “She could not stop these visitations [of memory], even if she wanted to. They plagued her like migraines.” But far from a wistful old biddy, clinging to history, Emily has grown comfortable with death. “Just thinking of the sequence of pieces [to be played at her funeral] warmed her like a pleasant memory. The great shame was that she wouldn’t be there to hear it.” An interesting balance, and one O’Nan pulls off.

The novel takes place during the first year of Emily’s widowhood. Through subtle but meaningful gestures, she grows into her new state. O’Nan makes the transition deadpan and poetic, devoting a whole chapter, for instance, to Emily’s strategies for moving tissue boxes. (One thinks of Steinbeck’s turtle crossing the road.) But, of course, the average life involves far more tissue-box dilemmas than nights of passion—why not admit it?

Emily conquers her fear of driving, and travels (alone, of course) back to her bedraggled hometown to face her own parents’ deaths. Perhaps only with age, and the impossibility of putting anything right, can we see ourselves clearly.  Emily considers the hurt she caused her parents as “an ungrateful child, stubborn and arrogant to no real purpose beyond her own vanity.” Asking forgiveness from a deceased parent may be life’s final coming of age. 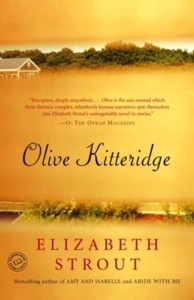 Elizabeth Strout’s Olive Kitteridge begins as a rigid, hypercorrect schoolmarm. In many of the stories, Olive displays the greatest hits of crotchety old age: judgment, rudeness, arrogance, a hot temper, and mood swings. Basically, she’s the stuff of school-lunchroom legend.

That persona starts to crack when she sympathizes with the young woman who starves herself (“Starving”) and the young man who tries to commit suicide (“Incoming Tide”). However, she still describes her long-suffering husband this way,

Henry was pretty irritating . . . with his steadfast way of remaining naive, as though life were just what a Sears catalogue told you it was: everyone standing around smiling.

Some people would call it coping.

Olive opposes reflection, chastising her son for revisiting childhood memories. “A person can only move forward … A person should only move forward.” Resistant to change, and bristling at her daughter-in-law’s domineering ways, Olive “wants to smear marker across the pale bedspread that Chris’ bride has brought with her. Looking around the invaded bedroom, she wants to mark every item she brought in.”

Olive blames others for her heartbreak, attributing her son’s estrangement to the bossy daughter-in-law’s influence. Only after a serious loss, one that forces her to reassess, can Olive face her own complicity. The possibility for reinvention makes Olive Kitteridge a classic coming-of-age story.

One of the horrors of growing old includes confronting the insensitivities of youth—one’s own youth. Olive recognizes in herself what she used to mock.

Years ago . . . Olive had watched as Aunt Ora had spilled melted ice cream down her front [and] she had felt repulsion at the sight of it . . . Now she had become Aunt Ora.

Judge not lest ye be judged, frozen dessert edition.

“Some days the sound of the mailman’s truck is his only company.” 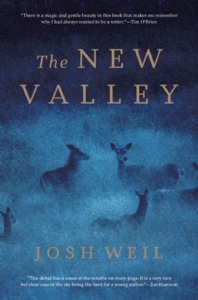 One third of The New Valley novella trilogy, Stillman Wing gives us an eponymous main character that looms larger-than-life. Domineering, inflexible, and offensive, Stillman Wing calls the neighbor boy “it” and his daughter’s boyfriends “her fuckers.”

In a classic Bildungsroman gambit, the novella opens immediately after a major life change. Forced retirement! At seventy-one! The indignity opens an enormous chasm in Stillman’s identity, one formerly filled by “tractor and engine mechanic.”

Stillman initially responds with denial. Too old to build and repair machinery—says who? One presumes the same people who put the 1928 Deutz tractor out as trash. Fools. He and the tractor are of the same vintage, and Stillman, with monomaniacal urgency, decides to rebuild the tractor as a way of rejuvenating himself.

Even though Stillman loves his daughter Caroline obsessively, his closed-mindedness drives her away, and her absence confounds and saddens him. He’s pushed her far enough that she joins a commune that practices a ritual “cleansing” in a polluted lake, which Stillman cannot convince her is a death trap.

The choices Stillman must make, his dilemma about whether to remain inflexible and keep the moral high ground, or to embrace Caroline’s lifestyle in “the new valley” and thereby keep her in his life, represent our elderly hero’s coming of age.

The Memory of Old Jack, by Wendell Berry

“Jack is troubled and angered in his mind to think that people would aspire to do as little as possible, no better than they are made to do it, for more pay than they are worth, as if the old world were destroyed.” 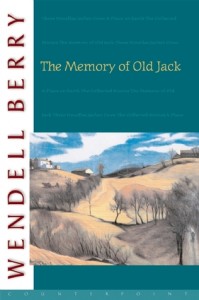 The Memory of Old Jack contains numerous coming-of-age arcs because it takes place not only in the present, when Jack is ninety-two, but in the vivid past as he relives the important events of his life.

The book opens with Jack on the porch of the hotel that boards elderly residents who can’t manage housekeeping. As Jack hears his nephew Mat call the cows to the barn, his memory drifts to earning enough money to buy his first team of mules. For Jack, those mules signified full manhood, when “it had become plain to him that he was equal to what would be required of him and to what he would require of himself.”

If coming-of-age involves owning mistakes, then Jack makes a significant leap by owning his role in the downfall of his marriage. Full of virility, pride, and stubbornness, he courted the county’s most beautiful girl, despite her scorn for manual labor, and dismissal of carnal pleasure.

He would return to her again and again . . . to be welcomed on the condition that he become better than he was.

With such expectations, it’s no wonder the marriage couldn’t last.

Characteristic of Wendell Berry, the turns of this story revolve around the land. Jack recalls his break with hired hand Will Wells. Not long after Emancipation, Jack hired the former slave to farm land that Jack purchased to expand his farm. Although Jack had no desire to become a land baron, he enlarged his estate to appease his wife and try to reclaim his marriage.

They tilled the land side by side for two productive years until their rift. “There grew between the two of them a relationship—a sort of brotherhood—of an intensity that Jack would know only that once.” Jack’s pride made him averse to a shared success. But more profoundly, as a landowner he could not abide the injustice of Will’s situation, that his work is “hopeless” because he would never be own a farm. The break with Will haunts Jack ever after.

Jack stands on the porch a bowed ninety-two-year-old, his hunched shoulders shrinking toward the floor. But in the mental revision of youthful errors, he actually grows up.

As varied as adolescents, the elderly provide fertile ground for stories. What we share, at all ages, boils down to change. Olive puts it succinctly: “Seven stages of life? Is that what Shakespeare said? Why, old age alone had seven stages!” Reading can provide the pleasurable spark of recognition, a mirror to our experience. But another, more compelling reason to pick up a book: to learn what we don’t know. Yet.