"Each story presents the embodiment of a different performer, and each presents a concept you could spin into a metaphor for something about contemporary American life." Shawn Andrew Mitchell reviews Mark Meyer's debut story collection, Aerialists, out now from Bloomsbury. 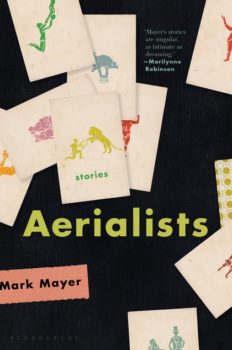 Mark Mayer’s debut story collection, Aerialists (Bloomsbury), attempts the high-flying act of conveying the state of contemporary America via a circus theme. The stories depict and allude to lions, strongwomen, acrobats, and ringmasters, and Mayer renders the cast in all its complexity. He presents common wonders and everyday magic like the “iridescent pink storm on a bowling ball” and the “millions of cars that were supposed to somehow never touch,” while also parading a menagerie of the tragic—sex that sounds like “desperation and work” and people who wish they could sink into linoleum patterns or float into the sky to avoid their problems. An emotionally complex, crowd-pleasing circus is not a simple show to put on, yet through a series of short story acts this collection does just that.

One way in which Mayer pulls off the trick of writing about the circus is by not writing about the circus. Because while the stories here are thematically linked to the big top, no show occurs on the page, and most of the characters have never been to the circus at all—they’ve only tended to a dying elephant or built model trains that conjure its myth. Instead, the circus is a symbolic stand-in for something like the American dream (pardon my grandiosity, but the circus spirit is infectious). See the following:

Each story presents the embodiment of a different performer, and each presents a concept you could spin into a metaphor for something about contemporary American life. You could, without undue effort, say that the aunt’s beard is protest, the severed connection between best friends is the severed connection across political divides, and the strongwoman is strong women everywhere.

This symbolism works best when you don’t notice it, or at least when it seems like a natural part of the background. For example, “The Wilderness Act” centers on a male accountant for an office protecting public lands who is visited by a traveling woman and shown something undefinable but clear about his sexuality and latent rage. In the story, the animals and wilderness are natural reflections of the main character and the lover who upturns his life. Someone says that it can “take a while to get the pet out of” a domesticated large mammal, the man crosses paths with “the head of a fawn” on a jog, and the bug that fells the tree in his lawn “would be restless wherever.” It’s like the main character thinks the woman might think about him: “the contradictions of managed wilderness had infected his passions, which were as nervously overseen as his parks.” These details fit naturally in the work, offering us a deeper glimpse of the characters or their situation. They are present, but function as organic icons that don’t draw too much attention and thereby imbue the stories with a bonus layer of depth. 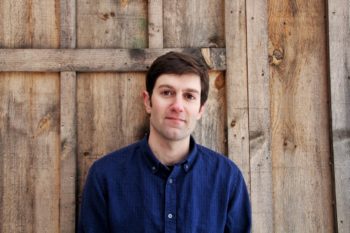 In contrast, the language and gesturing toward meaning in a story like “The Evasive Magnolio” at times feels forced. It’s a vignette about an old man named Stony who hacks apart a still-warm but definitely dead prize elephant in a small town the other residents have all vacated. Sadly, nothing is at stake because everything has already passed. Dust gathers against gravestones. The houses are boxed up. The land is “smutted,” and “the statue of the founding mayor [stands] bird-shat and tarnished.” Yet in a state of awe when faced with the elephant’s heavy, “unevaporable” presence, “Stony considered the size of the self that had lived inside Maggy and that could, with nothing more than will, straighten those oaken knees and raise an elephant up like a barn.” The story might be a thematic linchpin for the collection, insofar as it declares Mayer’s serious intent and channels the theme and mood of the whole collection into a single iconic image, and certainly other readers might enjoy it for the same reasons I didn’t. But the symbolism in this instance is so direct as to feel reductive: small town America and the American dream are dead, but not quite; we could still rebuild! Also, there’s a risk of condescension in portraying small towns as abandoned places that we can diagnose as lifeless, representing them with the convenient symbol of a dead circus elephant. Compared to the deceptive lightness of the other stories, which are so full of moral stakes and surprising, artful language, this one just feels a bit too on the trunk.

Where Mayer is at his best is when he distracts you from his skill and the weight of his stories with the sleight of hand of humor and lightness. In an interview at The Paris Review, Mayer says that “it takes all the meaning and threat out of sadness or anger to imagine them as discrete, specific, capsulized experiences,” and you can see his appreciation for complexity in the collection. In just two pages the narrator of the title story can describe his girlfriend’s eyes as “green with little sunflowers” and tell his veteran brother to leave the room by saying to “remember what you said about feeling like you don’t get along.” Maybe for some of the characters, it’s like that narrator says about his heart: “there’s only RAM enough for one thing at a time.” But these stories have room for it all. The characters pass through hard times and are mean to each other when what they mean to do is love, yet Mayer makes room to pass along their playful dialogue and moments of sweetness. Despite the poverty and divorce and dead elephants and murder clowns, the America portrayed here is not a simple, nasty, broken place. It’s a land where there’s still the surprisingly optimistic possibility of arriving at unity and light.