Ever wonder how someone could wake up every morning next to George W. Bush and think, "Hey, I love that guy!"? Yeah, me too. Which is exactly why I couldn’t wait to read American Wife, in which Curtis Sittenfeld imagines the life of Laura Bush. 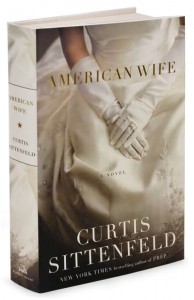 (Full disclosure: I have a large and juicy bone to pick with Sittenfeld after her petty, sexist, oblivious New York Times review of Melissa Banks’ The Wonder Spot in 2005. In the first paragraph, she snipes that “you’re not one iota smarter after reading” Banks’ stories; if that’s our metric for good literature, I submit that American Wife hasn’t added any iotas to my own personal collection of smarts. I will give Sittenfeld more than an iota of credit, however, for picking a subject so interesting that despite my long-standing grudge, I begged for the full-price hardcover as a birthday gift.)

Alice Blackwell, Laura’s doppelganger, has a history familiar to those who know Laura Bush’s biography: a small-town girl from a modest background, a tragic car accident in which she kills a high-school classmate, the quiet years as a 20-something public-school librarian. Alice does not marry until she is 31 (considered quite late at the time), and she dislikes being the center of attention.

But there is something too insistent in Sittenfeld’s portrayal of Alice. In what may be an author’s drive to make her protagonist comprehensible, she overdoes everything, making Alice consistent to the point of monotony. For example, readers are told repeatedly that Alice is uncomfortable with excess and ostentatious wealth. Her discomfort is shown in countless ways on what feels like nearly every page, and long internal monologues about it are offered at most stages of her life. We get it, and furthermore, many of us knew it before we picked up the book. Enough.

Sittenfeld draws Charlie, the Bush stand-in, considerably better. Freed from the compulsion to make him sympathetic, she actually manages to do so. He is boorish and somewhat revolting, but also disarming and profoundly different from the other men Alice has known. She sacrifices a long-held friendship to marry him after a quick courtship and assumes her new identity as the wife of Charlie Blackwell.

Taking myriad rumors about Laura Bush–that she is a closet liberal, that she never clicked with the extended Bush family, that she dislikes political life, that the car accident shaped her life profoundly–Sittenfeld writes them into the truth. She tosses in a few more for good measure, most of which fall into the spoiler category, but one in particular would be an especially clever explanation for why real-life Bush withdrew the Harriet Miers nomination.

It’s unclear why the fiction vs. nonfiction lines are drawn where they are – giving the Blackwells one daughter instead of two, for example, and setting the story in Wisconsin instead of Texas. In all the publicity for the book, Sittenfeld freely admits the book is based on Laura Bush (and even if she hadn’t, the parallels are pretty unmistakable) so it’s hard to understand the minor changes.

And Sittenfeld skips over some of what would have been the good stuff, like his governorship and the presidential election itself. Instead, she fast forwards from the time when Charlie quit drinking to the middle of his second term in the White House, with 19 months to go, which was likely around the time Sittenfeld was writing the book.

To conclude, I’ll go back to the New York Times for another complaint: She left out my favorite true story about Laura Bush. From a July 2000 special report:

…. a New York Times reporter brought up a story, which had appeared elsewhere in print, that she had once answered a question from Mr. Bush’s paternal grandmother about what she did with her life by saying, ”I read, I smoke and I admire.”

But Barbara Bush said in a recent interview that she remembered both her daughter-in-law’s three-part answer and her mother-in-law’s reaction.

What a perfect microcosm of an inscrutable, complicated woman that Sittenfeld’s stand-in could never be, because she was too much of a one-dimensional goody-goody. The real woman who said ”I read, I smoke and I admire,” and then denied it, is a modern-day enigma. Sittenfeld didn’t do her justice.

Read an excerpt from American Wife.