Cheating at Canasta, by William Trevor

William Trevor is a God anyone can believe in--ever-loving and omniscient, but not omnipotent. Even as he reveals lives destroyed or halted, one is calmed by his authority, safe in his hands. It’s true; there is nothing he can do to save his characters from themselves. But in his latest collection, Trevor does not just bear silent witness: unlike most contemporary short-story writers, he spells out his stories’ moral lessons, traces them to their furthest conclusions, and even ties up loose ends. 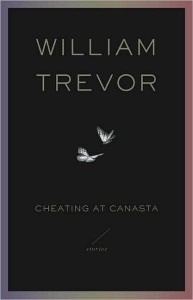 William Trevor is a God anyone can believe in–ever-loving and omniscient, but not omnipotent. Even as he reveals lives destroyed or halted by mistakes, one is calmed by his authority, safe in his hands. It’s true; there is nothing he can do to save his characters from themselves. But Trevor does not just bear silent witness: unlike most contemporary short-story writers, he spells out his stories’ moral lessons, traces them to their furthest conclusions, ties up loose ends. He is, as William Boyd magnificently observed in his New York Times review of Cheating At Canasta, “positively anti-Chekhovian,” everywhere breaking our inherited rules, explaining, leaving nothing unsaid, showing and telling to make his points doubly clear.

In the twelve stories that make up his latest collection (Viking/Penguin, 2007 hardcover/2008 paperback), Trevor returns to familiar, bleak territory. But it is precisely his habit of guiding the reader through the point of each story that elevates the bleakness above the territory of cheap emotional manipulation: it feels true, honest, even inevitable. The moral of each story — yes, the old-fashioned term is not out of place here, for the central characters almost always learn from the events recounted — is unambiguous. Take “Bravado,” in which Aisling, a teenage girl, witnesses a terrible crime committed by her boyfriend in a moment of drunken posturing. When the boyfriend is arrested and no other options are left to her, she finally admits to the police that she was present at the scene of the crime.

A lesser, more careful writer, a writer more constrained by fashionable ideas of subtlety, might have ended the story zooming tastefully out from Aisling, perhaps in a quiet moment immediately after her confession. But Trevor follows doggedly through, not just to Aisling’s father’s reaction, nor to her boyfriend’s letter from prison, but to her adulthood, to a shockingly risky scene in which she visits the grave of her boyfriend’s victim — how many writers, these days, are brave enough to show their characters begging for forgiveness at gravesides? — and admits for the first time that watching the crime all those years previously, “there was pleasure. If only for a moment, but still there had been.” The final line of the story preserves this courage, refusing to shy away from the not-so-happily-ever-after to which the story has being building up: we are told that Aisling often thinks of leaving Dublin but stays, “a different person too, belonging where the thing had happened.”

When several characters are equally affected by the events of the story, all are allowed their final insights: in “Men of Ireland,” a Catholic priest threatened with libel and the ne’er-do-well who blackmails him reflect separately upon their encounter. “Guiltless,” the priest thinks of himself, “he was guilty.” Instead of offering the man true counsel, “he had been fearful, diminished by the sins that so deeply stained his cloth, distrustful of his people.” The blackmailer is not given to such feats of self-awareness, but his decisions and conclusions are as clear to us as if we had stepped into his skin:

He hadn’t liked walking in the garden or making his demand, or even knowing that he would receive what he had come for in spite of twice being told he wouldn’t. He would drink a bit of the money away tonight and reach the ferry tomorrow. He wouldn’t hurry after that. Whatever pace he went at, the streets where he belonged would still be there.

Boldly signposted with images, Trevor’s epiphanies are unmistakable: Aisling kneeling at her boyfriend’s victim’s grave; Cahal, the protagonist of the first story, “The Dressmaker’s Child,” praying at a wayside altar, “offering reparation and promising to accept whatever might be visited upon him” — or with verbs: he knew, she sensed, she tells herself. Decisions are spelled out in the stunning clarity that signals turning points in real life, even when it is later muddied; where so much short fiction tends to leave loose ends untied, Trevor reminds us of the brief moments of certainty that follow great upheaval. In “The Room,” a woman whose husband once stood accused of murder has an affair to distract herself from that past; when the affair is over “she sense[s], without a reason, the dispersal of [the] restraint” that has marked her marriage for the nine years since her husband’s trial. Her husband “expected no more of her than what she’d given him, and she would choose her moment to say that she must go. He would understand; she would not have to tell him. The best that love could do was not enough, and he would know that also.” Robert, the widowed father of a little girl who resists his remarriage in “The Children,” decides to sacrifice his happiness for his daughter’s; having ended his engagement, he tells himself “that time in passing would settle how the summer had been left. Time would gather up the ends, and see to it that his daughter’s honouring of [her mother’s] memory was love that mattered also, and even mattered more.”

If this collection has a weakness, it is its unvaried gravity. I hesitate to admit that I thirsted for humour at moments — do I really dare to find fault with genius where William Boyd and Hermione Lee have found none? But “An Afternoon,” placed exactly halfway through this collection, brought one of my favourite Trevor novels — Death in Summer — so sharply to mind that a comparison feels justified. In both, Trevor steps with unflagging empathy and warmth into a world clearly not his, peopled with society’s outcasts: orphans and prostitutes in Death in Summer; a pedophile and an unmoored working-class teenager in “An Afternoon.” Hints of what I loved in Death In Summer are here in the warmth that is allowed to emerge out of squalor and the pitch-perfect dialogue that captures class without mocking it (“You like to go in here?… You all right with a McDonald’s, Jasmin?… I like a McDonald’s,” the man said, coming with the coffee). Just as in “Men of Ireland,” the protagonist of “An Afternoon” is not forced into insights inconsistent with her experience and personality, but simply allowed — after she has been unwittingly rescued from molestation or perhaps even rape — to cherish the encounter from her limited perspective: “[W]hen Jasmin closed her eyes again his smile was there and it didn’t go away. She touched with her lips the necklace that had been his gift. She promised she would always keep it by her.” But the humour that glitters throughout Death in Summer right up to its devastating denouement is only a muted gleam here, so that the overriding impression left by “An Afternoon” — and indeed, by the collection as a whole — is likewise subdued.

The contrast between humour and pathos is exactly what makes Death in Summer so devastating: we cannot wrap our minds around the fact of what happens to the characters who, only pages earlier, have us chuckling indulgently. The many cruelties of Cheating at Canasta are perhaps weakened by their unrelenting inevitability, but it’s hard to imagine that a storyteller as expert as Trevor has not intended precisely the effect this book has on its readers: not shock, not anguish, but a gentle, lasting sadness. 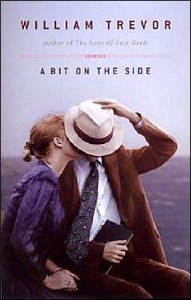 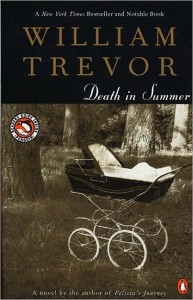 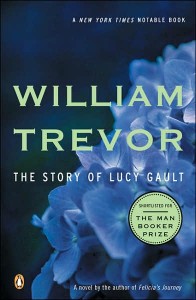