"This book is itself in disguise, allegory camouflaged as page-turner, parable gone under-cover as spy story."

Dinner at the Center of the Earth, by Nathan Englander

"Clarity, energy, and humor are indeed part of this dark novel. But hope? Yes, it’s there, too": Ellen Prentiss Campbell on Nathan Englander's latest novel, Dinner at the Center of the Earth.

Nathan Englander’s new novel, Dinner at the Center of the Earth (Knopf), inspired by the Israeli Palestinian conflict, explores questions of personal, political, and moral identity. The author says he is “interested, fascinated, heartbroken, obsessed with the Israeli-Palestinian conflict and our need to find peace on that front…everyone’s victim and avenger at the same time.” Here Englander dramatizes high-stakes, universally relevant questions drawn from the Middle East situation. How far to go for what you believe? What if the means fail to justify the ends? What price is too high? 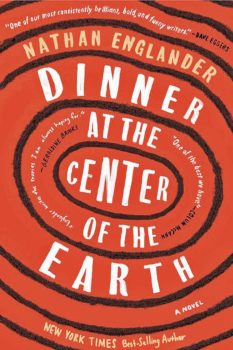 This intricately plotted but character-driven novel tells the story and back-story of a young American Jew who is a secret prisoner in solitary confinement in Israel. His work as an undercover Israeli operative led to violent consequences he naively did not anticipate, “gravity unforeseen.” Guilt-stricken, trying to wash the blood off his hands, trying to repair and prevent more damage, he crossed over the line to the other side, betraying the Israeli cause with what he sees, in hindsight after more than a decade in captivity, as a “desperate, last-ditch fugue state and driven by his good-hearted intent to do what’s right.” He betrayed, was betrayed in turn, and ultimately punished by The General who ordained his “disappearance” into an indefinite limbo of solitude and anonymity in an Israeli prison. Erased from the world, known only as “Z,” desperate to have his identity back, to have his selfhood returned, the prisoner has been petitioning The General for years. What the reader knows and the prisoner does not is that The General has suffered a stroke and has lingered for years in a comatose state, neither fully gone nor fully present. And so both the prisoner and The General have disappeared into limbo.

Cell-bound throughout the novel, Prisoner Z has infinite, interminable time to reflect and review, to re-trace his steps and miss-steps in flashback. He asks himself “How had a little, religious, Jewish-American boy from Long Island become an Israeli operative, living undercover…and now a traitor to his adopted state?” And then understands, remembering “the instant he’d discovered that inside one, there could as easily be two.” He’d been eight, afraid of walking past some older boys, anti-Semite bullies. “With a practiced motion, as if he’s done it a million times before, his arm swings up, and the hand…slides up…In one perfect action, the yarmulke is gone, palmed, and slipped into the pocket…Suddenly, like that Z is as Gentile as them. He feels it because he has become it.” Thus he put on his first disguise, made his first transformation, took the first step toward his ultimate loss of self and identity.

In a lighter vein, in his recent essay (“Chelsea Boy,” Vogue, November 2017) Englander describes his own unsuccessful attempt at transformation from aspiring novelist to fashion photographer. Not long out of college, he gave up on being a writer to try out being a fashion photographer. (Speaking of disguises, Englander had long, luxuriant hair then and says occasionally in shoots he would stand in briefly for the female model—transforming from photographer to subject.) But he soon discovered this medium wasn’t his calling: “My head went out of the game…I turned back from gazing out the window, oblivious to the fact that the camera had run out of film.” And so Englander returned to writing, his “first love,” reclaiming his identity as an aspiring author. Perhaps through this early experience Englander learned to appreciate disguise and disappearance, the classic tropes of spy fiction that would one day inform this novel’s consideration of the perils, limits and consequences of going under-cover, of transformation. 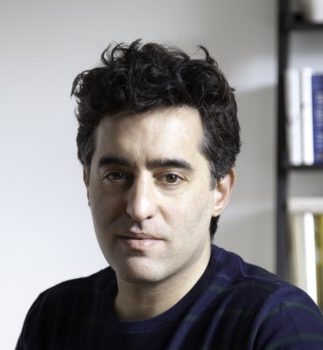 And this book is itself in disguise, allegory camouflaged as page-turner, parable gone under-cover as spy story. It’s a thriller and a morality play, tracing the boundary and the overlap between good and evil, morality and immorality. After publication of his modern translation of The Haggadah, Englander described himself as “a failed atheist” and said “…Writing is a moral act…if you don’t know what good and evil is, you can’t tell a story that someone else can read.” In Dinner at the Center of the Earth he tells a compellingly readable story about good and evil, and our human capacity for both. Readers will be reminded of Kafka, Sartre, Dante, as well as Jacob and Esau.

Englander says writing is “about transforming existential anxiety into clarity, energy, humor, and hope.” Clarity, energy, and humor are indeed part of this dark novel. But hope? Yes, it’s there, too. Of course Englander’s story of the Israeli-Palestinian conflict cannot resolve neatly. But, as one of his characters says in the opening pages of the book, “…You’ve decided there is one loss for you, too large. A sacrifice you find yourself unwilling to make…You simply won’t have it. You will not brook your broken heart.” In his conclusion, Englander does offer the possibility of an ambiguous mercy, and hope for a provisional, conditional love between enemies.