It's all about choices in Kevin Moffett's new collection---Further Interpretations of Real-Life Events---bizarre, unsettling, gut-wrenching choices.

“Have you ever watched someone read a story? Their expression is dim and tentative at the beginning, alternately surprised and bewildered during the middle, and serene at the end.”

Reading a Kevin Moffett story strongly resembles Kevin Moffett’s description of reading a story. This is so much the case that the titular opening story from his latest collection, Further Interpretations of Real-Life Events, almost serves as an aesthetic statement, an ars poetica, or ars fictiona. The narrator, Frederick Moxley, discovers his father has been writing and publishing stories under their shared name, stories which call into question Fred Jr.’s memories about their family and his deceased mother. Peppered throughout are aesthetic statements regarding fiction. The narrator’s former writing instructor, Hodgett, who is fond of citing rules and grandiose mantras while fondling himself behind his desk, says his stories are all real life, that anything worth saying can’t be said, which is why we write fiction. Fred Sr. says stories are dreams. Fred Jr., upset by the fact that his hobbyist father, who never studied creative writing, appears to be outwriting him, disagrees for the sake of disagreement and says they’re jars of bees. The rest of the collection consists of third person stories that somehow satisfy all these aesthetic statements at once. They feel uncannily dreamlike while remaining rooted in real life.

“Imagine a time for your characters, Hodgett used to say, when things might have turned out differently. Find the moment a choice was made that made other choices impossible. Readers like to see characters making choices.”

The eight remaining stories revolve around the issue of choice: making choices, having them made for you, or dealing with the fallout. In “Border to Border,” for instance, Maxim, a worker in the Estonian corner of the capitalist-theme-park Small World, debates between taking out an expensive loan to replace the crown he’s swallowed, or waiting for it to come out the other end, wash it off, and have it put back in. The story’s setting and humor make it clear why George Saunders 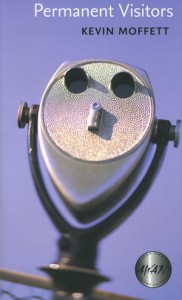 chose Moffett’s first collection, Permanent Visitors, as the winner of the John Simmons Short Fiction Award. At its core lies the simple choice of how Maxim will navigate his bizarro life and workplace. Other stories explore the time after an irreversible choice. In “First Marriage,” Tad and Amy have just been married by a judge in Lake Havasu City, Arizona (“Home of the London Bridge” according to the billboards: it seems the couple have just come from a setting much like Small World), and blaze eastward toward Florida in a borrowed car, feeling out the results of their impulsive decision. “English Made Easy,” on the other hand, concerns a lack of choice: Lena’s husband has passed away and she’s forced to cope.

“Why did this simple static image seem like such a rare coin?”

Moffett has a knack for teasing out the uncanny and letting it speak for itself. He constantly presents unsettling situations and images, uncalled-for and inappropriate feelings, conversations with vaguely menacing minor characters, miscommunications and misunderstandings—all of which foster a sense of unease. Lena spends a good portion of “English Made Easy” walking alone around her neighborhood. The strangeness of life without her husband pains her. The houses seem to take on their own lives; they “float together and separate like boats in a bay.” Lena hears “the hollow, bone-like tock of bamboo chimes nearby […] a mournful, an awful sound to broadcast through the neighborhood.” Lena lies to the other characters she meets without completely understanding why. She encounters, repeatedly, an older woman named Mrs. Appleman who suffers from an “exquisitely benign dementia.” Sometimes she remembers Lena, sometimes she doesn’t, and either way it’s eerie, as though Lena beholds the future of her own fading mind. Mrs. Appleman offers totemic statements that don’t feel entirely welcome or accurate but are also spot-on in some obscure way, such as when she calls Lena’s son a “warm little fortune cookie” or says Lena looks like she “just found a lost race.” Later in the story, when Lena runs across some bikes and thinks “if bikes were horses,” she “leaves the thought incomplete, lets it grow untended, like a deep-woods weed.” This is one of Moffett’s biggest gifts: leaving a thought or image in its fragmented and suggestive state; trusting that it will grow untended in our minds.

At the end of “Further Interpretations,” after much stalling, Fred Jr. finds himself home for the holidays. Fred Sr., who can shake presents and divine their contents, shakes one in front of his son. Listen closer, he says. This is the warm-hearted center of Further Interpretations of Real-Life Events, the aesthetic that really distinguishes this collection. There are plenty of writers who attempt to work in George Saunders’s style, one of absurdity and satire and capital letters, but what they often miss is the morality and heart at its core. Moffett misses nothing. He follows his own advice and listens closely, to the detail, to the mystery, and to his characters’ plights. You’d be wise to do the same.