The Magicians, by Lev Grossman

At the heart of Lev Grossman's latest novel, The Magicians, lies the idea that a fantasy world exists, but one far more complex, and at times limiting, than Quentin Coldwater, the unlikely hero, might wish. Drawing on the rich fantasy traditions of Tolkien, Plover, and Rowling, Grossman subverts genre expectations in wholly original ways. 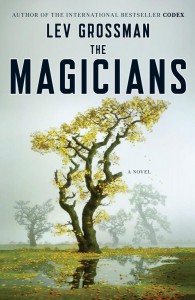 At first glance, the fictional landscapes in Lev Grossman’s third novel, The Magicians (Viking), seem familiar. The story follows Quentin Coldwater, the nerdiest of nerds and top of his high school class, who dreams of discovering the storybook land of Fillory, based on Christopher Plover’s fantastical realm, and finding adventure there. It’s all make-believe until he wanders onto the grounds of Brakebills College for Magical Pedagogy. The school, hidden between the boroughs of New York City and reminiscent of Rowling’s iconic Hogwarts School of Witchcraft and Wizardry, teaches young magicians to harness their powers. Despite the many allusions to classics of fantasy, the novel doesn’t conform to old genre equations. Grossman builds a new, subversive world on the foundation laid by his predecessors and fills it with people who look a lot like us. The result is as surprising as it is enchanting. Like Kazuo Ishiguro and Justin Cronin, Grossman is a writer who transforms the shape and expectations of genre fiction for readers on both sides of the genre divide.

The idea fueling the winsome settings is simple: magic is real. Quentin is a real magician. Instead of relying on rules of magic established in past novels, Grossman deftly structures an internally consistent world with a tangible system of magic. Magic is hard. Casting a spell is not as easy as waving a wand and muttering Latin, but rather a complex series of hand movements and incantations that must be adjusted for circumstances like the time of day or the phases of the moon. The world of the novel operates within strict limitations: the school relies on Victorian-era technology because magic puts electronics on the fritz. The power of a spell is finite, and consequences are absolute: expending magic without control will not only kill a magician but change her into a niffin, “a spirit of raw, uncontrolled magical energy.” The narrator refuses to think of Brakebills and Fillory as anything less than real, and that confidence carries the large, expositional segments throughout the novel. Learning about these worlds is fun, and Grossman playfully pays homage to his forerunners with the inclusion of games like welters, a life-sized elemental chess-like game, and spells based on those found in Dungeons & Dragons.

The characters navigating Grossman’s world are interesting, funny, and heartbreakingly flawed. Magicians are all outsiders, miserable and obsessive, and none more so than Quentin. Entrenched in fantasy stories, Quentin yearns for the Fillory of his childhood where happiness is seemingly achievable. He is a fully realized character who is, most importantly, loved by the narrator. The sarcasm in the narration is always filtered through Quentin, but never aimed at him. At the beginning of the novel, he and his friends walk to a college admissions interview and Quentin hopes for a way out, “If the interviewer actually turned out to be a gatekeeper to the magical land of Fillory, he thought, it was too bad he wasn’t wearing more practical shoes.”

When Quentin and his friends arrive and find the door ajar, Quentin goes in to investigate and finds a liquor cabinet. “It felt like the world was revolving around him, like his whole life had been leading up to this moment… Quentin reached back past the ranks of softly jingling bottles and felt the dry, scratchy plywood at the back just to make sure. Solid. Nothing magical about it.” Instead of mocking or ridiculing in this anticlimactic moment, the narrator sympathizes with the perpetually stuck, disappointed Quentin, who would go so far as to check the back of cupboards in a stranger’s house for clues to an alternate reality. He is someone with holes in his heart, someone who never got over the possibilities of stories. All he wants is an escape, something “that did what books always promised to do and never actually quite did: get you out, really out, of where you were and into somewhere better.”

Quentin does get all that he ever longed for, but that, of course, is where the trouble really begins. Quentin is a perpetual coward. His friends aren’t exactly superheroes, either. Eliot is an alcoholic who has trouble accepting his sexuality. Painfully shy Alice never stands up for herself. Janet overcompensates for her insecurities by boasting, and Josh hides behind comedy. They’re people like us, or people we know. After graduating from Brakebills, Quentin steps back to observe his friends and realizes that “they had all the power in the world, and no work to do, and nobody to stop them. They ran riot through the city.” Instead of following the hero’s journey that other familiar fantasy works employ, Grossman leads his unprepared characters through a reluctant and ill-planned adventure to Fillory. The characters enter the imaginary place of childhood stories that turns out to be dangerously real. But even as danger mounts, Quentin never develops into the hero dictated by the genre: Grossman pushes him further.

Quentin is incapable of confronting his problems and can’t act to save others, even when they’re in dire need of help. Though brilliant, he is often unprepared to deal with the hardships of becoming a magician, but it’s through him and his friends that Grossman convinces the reader that if these worlds existed, people like us might enter and survive them. In the final battle between the magicians and the beast, there is a moment where Quentin panics. His breath becomes shallow and he realizes that he isn’t ready for the feat of defeating an evil sorcerer, that the books had it all wrong. In that same moment, the reader panics with him. Grossman chronicles a final battle where the prospect of failure is terrifyingly palpable, both for Quentin and the reader.

Some of the novel’s unanswered questions, such as where Quentin’s true talent lies and where his relationship with his crush Julia is heading, are most likely being kept for Quentin’s return to Fillory in a sequel. However, the heart of this novel is clear: “to live out childhood fantasies as a grown-up was to court and wed and bed disaster.” But even as this injunction is uttered, Quentin rejects it. A part of him will always need the story, need escape. Grossman presents not only the realities of fantasy, but also the opportunity for an individual to see himself clearly through it. Quentin and his friends might not be the heroes they’d like to think they are. Grossman doesn’t make his characters stop dreaming, but he does force them to consider their dreams carefully in The Magicians. If magic is real, it’s difficult, but like anything that’s truly worthwhile, it shouldn’t be abandoned. We should recognize it and revel in its power.