The Magician King, by Lev Grossman

Little jaunt to the underworld? Don't forget your passport. The second installment in Lev Grossman's Fillory series, The Magician King, continues to play with realist fantasy and the right amount of irony to meld the two. Quentin and his pals provide a sly and subversive fairy tale for grown-ups, with a caution: be careful what you wish for. You might get it. 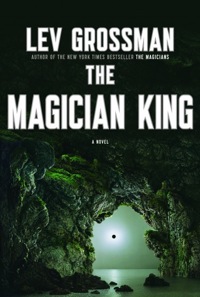 There are practicalities to consider when traveling in an enchanted realm, things like learning the proper way to unsheathe a sword or remembering to carry a passport after crossing into the underworld. The Magician King, the second novel in Lev Grossman’s fantasy trilogy, balances epic scope and the ironies of everyday life that always seem to get in the way. This book showcases his growth as a writer and a storyteller, providing a grittier and more sophisticated story than its predecessor, The Magicians.

Grossman proudly displays nerdy genre cred with allusions to prominent works from fantasy legends like C.S. Lewis, Ursula K. Le Guin, and J.K. Rowling. But he continues the work he started in Book One: upend the tropes! No derivative fantasy or a genre paint-by-numbers found here. Fillory is no Narnia, but a world being torn apart by its own gods. The latest installation continues to play with reader expectations. Grossman pushes further into the subversive territory of what real magic looks like and how far Quentin—and readers—will follow.

The Magician King picks up where The Magicians left off: Quentin and his friends—Eliot, Janet, and Julia—reign as the kings and queens of Fillory. Peace and idleness grow stale for Quentin, and jonesing for adventure he volunteers for a sea voyage to the outer islands with Julia to collect back taxes, aligning with the spirit of Lewis’s The Voyage of the Dawn Treader. Once there, Quentin hears the fable of “The Seven Golden Keys,” a story about a man who loses his daughter and searches for her through of a network of gateways unlocked by magical golden keys. The tale holds the secret to preventing unfeeling gods from sundering magic from all worlds. The first golden key leads Quentin and Julia back to earth where they reunite with Quentin’s schoolmates and start their Sisyphean task of returning to Fillory.

While on earth, Julia introduces Quentin to the desperate, anarchical world of hedge witches and itinerant magicians. She is the only character to fail the Brakebills entrance exam, and Julia’s outsider status gives Quentin access to a network of mortals and immortals that the establishment rejects. This seedy underworld has its own cryptic structure and rules, and Julia’s scramble to learn magic through bouts of depression has a timely ring to it. Anyone tried looking for a job lately? Still, in this instance at least, hard work prevails. Julia is obsessive enough to memorize arcane languages, painful hand positions, and obscure cosmological theory, and thus reclaims magic from the privileged, the institution.

As a magician king, Quentin exchanges schoolboy melancholy for some confidence, though the traits that made his character lovable in the first novel—hopeless idealism and naive ambition—persist. Quentin still dreams about leading other lives in still other worlds (for some, one magical realm is not enough). Face to snout with a river dragon, Quentin fantasizes:

Somehow in the back of his mind he’d vaguely thought that the dragon might want to be his friend, and they would fly around the world solving mysteries together.

This moment is pure Quentin. Even in the face of marvels, he always wants more.

Grossman’s fictional landscapes are consistent and concrete. The rules and consequences for magic are still absolute, and his fantasy settings retain the patina of the quotidian. The underworld where the dead gather is an aging middle school gym with crappy board games with pieces missing. Grossman makes allowances for the passage of time between this and the first novel and embraces the possibility of magic as progressive. When Julia and Quentin sneak onto the Brakebills campus, the waiting dean explains that Brakebills upgraded their magical security system and can identify both intruder and intent within a certain radius.

These details plant the novel in the contemporary world, and Grossman considers how the convenience of modernity translates to his magical. Technology plays a greater role in this narrative. When Josh creates a portal from Italy to England, he uses satellite maps on the internet to pinpoint the portal’s stopping location. One character defends her use of a smart phone by saying, “But I used magic to hack it.” Technology enhances spellwork. Grossman builds a world where the real and the imagined intertwine in unexpected ways.

The Magician King tells of the hero’s journey, a lineage drawn from the great epic sagas, from the Nibelungenlied to Tolkien. However, Grossman refuses Quentin his overarching desire to return to and stay in Fillory. Being a hero is a risky business and heroes don’t always get what they want, even if they end up on the winning side. The parting image of Quentin roaming the Neitherlands, a series of portals to other worlds, acts as a foil to his longing to be exactly that: between worlds. The sly and roundabout ways that Quentin’s wishes are fulfilled remind one of another ancient form: the fairy tale. Grossman revives it with panache, and just the right amount of irony.