Long for This World, by Sonya Chung

The cover of Sonya Chung’s debut novel, Long for This World (Scribner, March 2010), shows a young woman gazing out over a wide ocean, raising a camera to her eye. Chung’s main character is a photographer, but that’s not the only reason this cover is so apt. The novel unfolds like a collection of intimate snapshots, telling a story of loss and unexpected renewal. 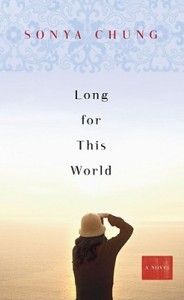 The cover of Sonya Chung’s debut novel, Long for This World (Scribner, March 2010), shows a young woman gazing out over a wide ocean, raising a camera to her eye. Chung’s main character is a photographer, but that’s not the only reason this cover is so apt. The novel unfolds like a collection of intimate snapshots, telling a story of loss and unexpected renewal.

Long for This World traces the intersecting paths of two branches of the Han family, one headed by a brother who emigrated to America, the other headed by a brother who stayed behind in Korea. The Korean-American Hans long for escape: Han Hyun-kyu, the patriarch, flees his life in America—including his wife—for his younger brother’s home in rural Korea; his daughter Jane, a war photographer with emotional scars of her own, follows her father overseas; and Henry, Jane’s brother, struggles with personal demons after his family’s departure. Meanwhile, the Korean Hans find their tranquil lives thrown off-balance by the arrival of their relatives, and tensions that have been tacitly ignored can no longer be kept quiet.

Although the novel spans several generations of Hans, it is Jane who stands at the novel’s core. As the only character granted a first-person perspective, she tells how her life has been shaped by her career behind the camera, from “baby fingers curled over into O’s, binocular lenses to frame objects of interest” to college photography classes to a fateful assignment in Baghdad during the Iraq war. Taking pictures is her way of interacting with—and interpreting—the world. “The camera is more than just her tool,” one character thinks as he watches Jane. “As if she sees something other than what appears in her viewfinder, something within, some essential truth or incisive view of what goes on at the surface.” 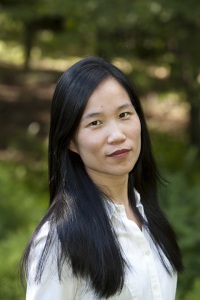 Long for This World itself feels framed by that viewfinder: it progresses not by traditional rising action but in a series of moments, meticulously captured and carefully juxtaposed. In the opening section, “Flight (1953),” we glimpse Han Hyun-kyu’s initial departure from his hometown; the very next section, “Flight (2005),” shows Han Hyun-kyu leaving his family in America to return to Korea—a mirror image of that earlier journey. Set side by side, these paired moments begin to suggest the larger story of the Han family.

Because of this collage-like structure, the novel offers the same pleasures—and challenges—of a photography exhibit. Reading, we leapfrog across space and time, from a kitchen in a small South Korean town to a village in Darfur to a gallery in Paris, and we must put together the pieces. What’s the significance of this moment? Why is this snapshot placed beside that one? How do these all fit together?

At times those carefully structured vignettes can be frustrating: as with any intriguing photograph, we want to explode the view, to see what’s outside the frame. Sometimes we want to zoom farther in and linger in the details, or zoom farther out and gain context. And sometimes we want those motionless pictures to spring to life. By their photographic nature, many of the novel’s most crucial moments feel static—a young woman waiting in the maternity ward, a little girl standing atop the Empire State Building, a couple awkward and alone together in the kitchen—the characters frozen by pain, sadness, loss, love.

But as an author, Chung seems aware of this limitation and, through her characters, she offers a new perspective. Studying a photograph of a mutilated young Kenyan girl, one character complains: “It’s her I feel angry at… I mean, it’s like you want her to fucking do something, or feel something, not just sit there and pose.” Jane replies, “I always thought of her as brave. Because she’s posing. She knows something has just been taken away from her—or I think she does—and she’s sitting there, looking at us, composing herself for people to see, and she’s saying something just by being seen.”

So are the novel’s photographic moments static, or brave? Perhaps both. Chung presents each scene with confidence and trusts us to make the necessary connections, to see what the characters are saying by allowing themselves to be seen. And in fact, one of the joys in reading this debut is connecting the pieces, then stepping back for the big view: the intricate and nuanced family story that emerges.

For, despite the international conflicts that form the backdrop of the novel, this is at heart a family story: a portrait of the way the Hans are both fractured and then relinked in unexpected ways. Its quietness belies the deep emotions within. “Many photographers, they lust for that moment, the height of violence or terror or destruction, when they can swoop in with a camera and shoot—like a gun, you know?” a veteran photographer tells Jane. “But listen, we are not combatants in the war, we are not there to crave and consume violence. […] You love your work, you love the art, the craft of capturing these instants, because all the world and all humanité exists in an image.” The same could be said of Sonya Chung. Indeed, the woman on the cover could represent her, capturing a vast landscape in a single shutter click. 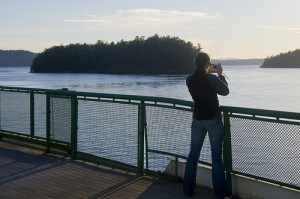 – Via Youtube, here is the book trailer (by Connie Chung) for Long For This World:

– In this video for Simon & Schuster, Chung discusses what inspired her first novel — and about how she knew it would be a novel, rather than a shorter piece.

– Read Sonya Chung’s story “Getting It Right” (originally published by the Threepenny Review), link to other stories by Chung, and read her essays and reviews at one of FWR’s favorite lit sites, The Millions

– Become a Facebook fan of Long for This World.

– Pick up a copy of this novel from a local (or favorite) indie bookstore.