A debut collection focused on quiet lives that intersect, collide, and separate - forever altered by the encounter. 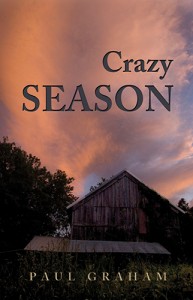 Paul Graham’s debut, Crazy Season (Kitsune Books), is a quiet collection, each story reminiscent of a pause in conversation to consider the gravity of what has just been said. This pause appears to be Graham’s particular narrative obsession – that moment when otherwise unremarkable lives intersect, collide and separate, forever impacted by the encounter.

Simplicity binds Graham’s characters together:  a man ekes out a living driving a snowplow in upstate New York; a middle-aged woman recovers from divorce; a teenage boy discovers online pornography; an elderly funeral director finds a college student passed out in an expensive casket.

Ordinary people come together to reveal desires and disappointments, often in unexpected ways. In the titular story, the snowplow driver, Rick, sustains a minor gambling loss and has to deprive his son of a ritual treat, reflecting that,

… up here in the winter, a person needed things like weekly Moose-Breath Burgers to give life shape and definition. Otherwise you might as well wander into the frozen woods and never come back … This was not sentimentality, he knew. It was survival.

Using unfussy prose, Graham observes characters with a precise eye: “He wore his irony like a salmon wore a layer of fat against life’s cold rushing waters.” Lines like these sharpen the story’s world in an instant and Graham fills vast emotional spaces in few words. In “Snow in Summer,” a wife spends an afternoon planting a garden for her terminally ill husband. Though brief, it is an intense study of the “emotional ledger” of dependence and care the couple cannot avoid keeping. When she realizes the garden will be hers alone–her husband will not live to see it bloom–the moment is all the more striking for its understatement. The collection falters when Graham strays from that economical prose. Some stories end uneasily, expanding into bursts of thematic largesse inorganic to the story: “labyrinths in space where souls are sucked into the glass eye of a screen, where loneliness and desperation buzz like a high-voltage box in the backyard.” Stories that diverge from Graham’s pitch-perfect observations of brief interactions are the collection’s weakest. “Thin Boundaries” is told from the alternating perspectives of a man and woman, co-habiting under the shadow of a past rape. Unlike “Snow in Summer,” where a single moment beautifully clarifies the relationship, in “Thin Boundaries” questions remain opaque.

At his best, Graham’s prose and keen eye elevate this slim collection to a promising debut. Fittingly, the final lines reflect on those very intersections that Graham parses so successfully, where a few hours change everything, “It is the kind of day that builds a life. The kind of moment that gives you to yourself.”