[Reviewlet] Don’t Tell Me I Didn’t Warn You: On Reading George Saunders

Sharon Harrigan on the peril of reading George Saunders. Among them, the inability to leave home without encountering Saundersian absurdities. George Saunders is dangerous. A friend once said, “Whenever I read him, I can’t stop writing like him.” I’d go further: I can’t stop thinking like him. Every bizarre object I encounter starts to resemble a Saunders dystopic landscape, terrifying and hilarious.  The Game Bus: a seatless, windowless vehicle filled with videogame equipment, where teenage boys enjoy the absence of all human and environmental contact. The Make-Over Playdate: a day spa for little girls with cucumber facials and pretend Botox. The list is endless.

The last book I read that made the world over in its image was The Bus Driver Who Thought He Was God by Etgar Keret. I couldn’t get on a plane without recounting the plot of one of the stories to my unsuspecting seatmate—flight attendant claims love at first sight, jet nose-dives toward doom. Wells Tower made me see everyone as anti-hero. But Saunders’s ability to leave a dent, to filter not only what I read and write next, but what I see, is all his own. 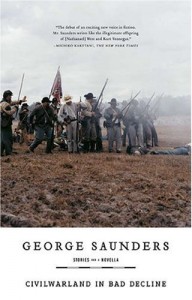 It helps that I live in Virginia. This is Civilwarland–driving distance to a dozen battlefields, walking distance to statues of Confederate generals. Of course the theme park in “Civilwarland in Bad Decline,” the title story of Saunders’s first collection, doesn’t exist. Can you imagine? An employee/actor in full military garb pretending to be a soldier in the Civil War, trying to convince tourists it is still 1863? (OK, I’ve seen it, too, at Appomatox.)

The Civilwarland story is so goofily and scarily realistic that Saunders’s supernatural addition—the ghostly McKinnon family—feels like a wink to assure us it’s not real. He wants readers to be absolutely sure this is fiction, not Nostradamus for the 21st century.

Saunders writes satire, but he does it with heart. His characters commit awful deeds, they hack off a boy’s candy-stealing arm, stuff “a Baggie full of human ears,” pose as conservations and fill mass graves of raccoons, and slice a boy to bits in a wave machine. But they are also capable of atonement and even self-sacrifice.

The narrator of “Offloading for Mrs. Schwartz” erases forty years of his memory to care for an aging stranger. Characters feel “sick in [their] guts as the guiltless stars wheel by.” In “The Wavemaker Falters” the dismembered boy, Clive, reassembles all his minced body parts to visit his murderer. A“400 pound CEO” concludes: “At least I’m not cruel to the point of being satanic.” Thank you, George Saunders, for giving me this mantra. Because I’m so entrenched in your really weird and weirdly real world—of Verisimilitude Directors and personal interactive holography and Centers for Wayward Nuns—I’m starting to lose all perspective.

I told you this guy is dangerous.