[Reviewlet] So There!, by Nicole Louise Reid

Nicole Louise Reid’s So There! is a book of harrowing and darkly funny short stories about original, compelling characters refusing easy answers, seeking out lives that share a property line—maybe even a driveway—with Death. 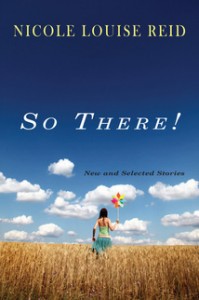 Nicole Louise Reid’s So There! is a book of stories filled with restless people who both desire and reject succor. A woman finds freedom imagining her many lovers to be reenactments of her first time, a behavior linked to her refusal to move out of her mother’s house. A teenage daughter searches for love and control in a world dominated by her violent father and thrill-seeking, promiscuous mother. An aging mother clings to her grandchild, while her daughter-in-law confronts the mother’s ladies’ club with a disturbing story about a porpoise trying to save its already dead young. Abandonment is a constant as well as a constant fear for these characters; they fear ruptured relationships, sundered marriages, and turbulent pregnancies. The women in Reid’s stories are betrayed by lovers, spouses, children, by their fragile, rebellious bodies.

The images in Reid’s stories are startling, just this side of believable, and Reid uses them to disarm her readers and open them up to her peculiar wisdom. In the story “Two Swimmy Fishes,” a woman whose hands—which she employs by obsessively scrubbing dishes—remind her so much of her miscarried twin boys that she begins to spend most of her time at the sink. In “If You Must Know,” a locust burrows into the soft flesh of a sleeping woman’s armpit. In “Pearl in a Pocket,” the narrator likes a boy who often carries a hammerless pistol, smaller than his hand, a symbol of paralysis, uncertainty, impotency, muted violence, and more. “To the Surface for Air” contains that haunting description of a mother porpoise thrusting its baby toward the river’s surface, shrieking in panic and mourning. 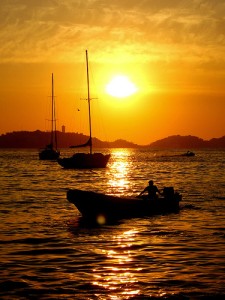 Water is everywhere in the collection, from sinks and rivers to baths and wombs. It’s in the story titles—“Careless Fish,” “Pearl in a Pocket,” “Glimpses of Underthings.” And we sense Reid’s characters tugged under, kicking frantically, growing tired. (Reid’s novel The Breeze of Passing Things also features a character obsessed with water.) There’s that old chestnut about the guy who prayed to God to save him from drowning. After three boats go past, the guy finally dies and says to God, “I prayed all day for you to save me,” and God says, “I sent you three boats!” Reid’s characters fight for answers they don’t necessarily want, seeking out lives that share a property line—maybe even a driveway—with Death.

One story sitting smack dab in the center of So There! is markedly different from the others, with a more deliberate tone and pace. “Someone Like Me” is dedicated to “Russell Banks’s Sarah Cole,” and the story picks up after the end of “Sarah Cole: A Type of Love Story,” Banks’s devastating and complicated story of a vain, handsome man’s affair with the ugliest woman he has ever seen. Banks’s story conflates narrative and sexual power, with a dash of interclass complexity to boot. Reid mostly eschews these issues, focusing instead on Sarah’s daughter, Perry, and choosing as the story’s narrator a young girl who goes to school with her. Reid’s interest here is broader, and Perry is different from her mother: kinder, sweeter, wiser, vulnerable in ways that are more existential and less tied to her gender. We are all cruel, the story begs us to remember, and the vulnerable are cursed to live in a place with no better saviors than ourselves.

A pair of petty complaints: some of the story titles feel a bit understated and slack considering their intense characters and imagery. And the exclamation point in the book title is an odd choice which, accompanied by the cover, seems to beckon a younger audience to a brighter, more hopeful book.

Don’t let these choices deceive you. So There! is the real thing: a book of harrowing and darkly funny stories about original, compelling characters refusing easy answers. It is the kind of collection short story readers, ahem, pray for.