"Stiff is a compendium of love stories for a broken city."

"Even when interacting with the ones they want to love, the men in these stories cannot be fully honest with others or themselves": Melissa Grunow on Steve Hughes's debut collection, Stiff, out now from Wayne State University Press.

Steve Hughes’s debut collection, Stiff, investigates the depths of prototypical masculinity for all its depravity, desire, divisiveness, and potential for disaster. Set against the backdrop of Detroit grit, Hamtramck hope, and suburban sprawl, the stories capture the lives of men who are hoping for something more, whether it be love, sex, satisfaction, success, recognition, or—most importantly—a sense of home. 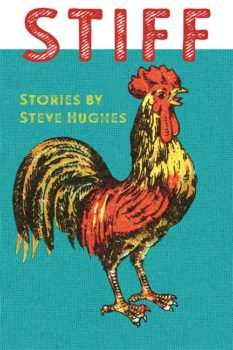 In many of these stories, elements of semi-speculative fiction titillate the reader’s imagination, challenging reality in a way that teases out the inner workings of the characters’ flawed humanity. A man’s mistress carves his pumpkin head into a jack-o’-lantern. Another man, suspicious of his girlfriend’s close companionship with an ex-boyfriend, dons a feathered costume and attempts to fly away. A love affair literally becomes physically consuming when a man and woman’s genitals grow beyond realistic size, separate from their bodies, and copulate under the moonlight while the couple waits for their return. While the surface of these stories seem playful and whimsical, there is an underlying sense of loss and hopelessness.

In “Dexter’s Song,” for instance, a hopeful musician who is strung out on junk believes he has inherited the spirit of Coltrane. Hughes’s prose is clear and precise, making the narration feel conversational, as though these stories were being told atop torn stools in the back of dark bar:

I wanted to quit the dope. I really did. The truth I told Sabrina was this: Coltrane kicked the dope. I think I can too. Fact is, I was born in a hospital in Detroit, at almost the moment that Coltrane died. I don’t know if that makes me special or what, but I think it might.

When Sabrina gives him a saxophone abandoned by her ex-boyfriend, he finds his sound, but risks everything when he can’t kick his drug habit. The musician’s torment is mimicked in the story’s settings, giving the collection a modern noir quality.

Music plays a vital role in many of the stories, from the drug-addicted saxophone player in “Dexter’s Song” to a club DJ trying to inspire bar-goers to have a good time. In “The Perfect Song,” Mister Lady Stardust puts on a white cape and spins records in hopes of doing just that, all the while eying a woman named Cass whom he longs to kiss again. There is beauty in the grit of the moment when he steps outside for a cigarette during a longer song and ruminates on the space around him, the cosmos, the greater purpose he — and so many of us — long for in the mundanity of our lives.

I’ve got my back against the brick wall of the bar, just for a minute, trying to align myself with the planets and stars. Way high in the dark sky, the moon is tracking westward. Here I am under its pale light, feeling positive about the night. I’m praying the heavens and rocket ships above, and to the good pale skin of the moon, that every girl and dude in the bar strip down to their underpants and dance and sweat and celebrate everything human and beautiful.

The ideation of the cosmos contrasts against the shadowy reality of the settings in the stories throughout the collection. Detroit is dark, broken, and isolating. Hamtramck is a wonderland of diversity that is also landlocked in the urban decay of rickety staircases, broken windows, and heatless homes. The worlds are both well-known and foreign to the characters whose souls are lost among them.

In the story “I Am Still Learning About the World,” a man desperate for the love and companionship of a past girlfriend attempts a relationship with a female artificial intelligence lifeform, only to be perpetually dissatisfied that the seemingly perfect woman cannot compare to the flawed one he loves. 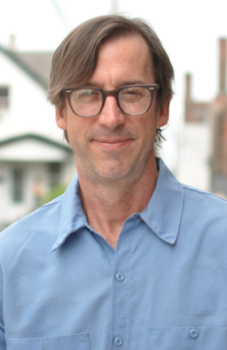 While the narrative is insightful and cunning in the way it delves into the men’s psyches, the dialogue—particularly between the male protagonists and their female counterparts—is often stilted and underplayed in what it reveals. Even when interacting with the ones they want to love, the men in these stories cannot be fully honest with others or themselves.

Stiff is a compendium of love stories for a broken city. Much as Detroit longs to reestablish itself as the heartbeat of southeastern Michigan, the men in these stories seek a place for themselves by reaching often for something otherworldly but almost always somehow unattainable. While there may be a layer of filth and decadence on the surface of their characters, they are complex in their hope for what might be.