"Robin MacArthur’s debut collection proves that we can have it all as readers and writers."

Still All Honey: Tragedy and Song in Robin MacArthur’s Half Wild

"There is knowledge in this book that seems bigger than MFA fodder, a living-out of the truths that the writing life uncovers and details that cannot be arrived at via Google": Nathan Poole on Robin MacArthur's debut collection, Half Wild.

“Tragedy consoles us and seduces us to live, but the synthesis is a fragile one…”

In Nietzsche’s early work on dramatic theory, The Birth of Tragedy from the Spirit of Music (1872), stories are construed through two artistic energies. “Cultures,” he calls them. There is the cult of Apollo that worships light, intention, and subjectivity—basically all things tidy—a culture that prizes distinction, respects limits, and colors between the lines. And then there is Dionysus, cult of ritual madness, winemaking, and inter-subjectivity. Think James-Franco-in-corn-rows-with-entourage; think Lear, mid-meltdown on the heath: “Blow, winds, and crack your cheeks!…Crack nature’s moulds.” Dionysus—who sounds a lot like Nietzsche, it’s worth noting—doesn’t mind the dissolution of the real and unreal, the breaking of natural “moulds” and the orgiastic release of individuality. You can see how easy it is to prefer the effects of Dionysus on a story, and also to imagine that these two aesthetic cults don’t belong in the same story together. 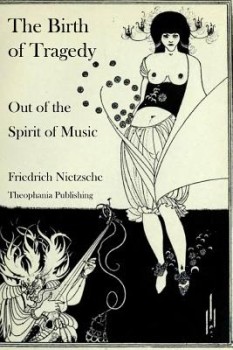 Whether Nietzsche called it or caused it, I’m not sure, but the culture wars of the twentieth century followed this very rough outline, favoring the abstract-expressionism of Dionysus and all but banishing Apollo’s formalism. The irony of all of this is that Nietzsche actually wanted to create a very different scenario, one where artists could draw equally from the wells of both aesthetic cultures. He wanted to recreate a special narrative chemistry, what he termed a “rebirth of tragedy.”

For fiction writers, I wonder if the landscape of contemporary short stories hasn’t followed the same ironic trajectory and become equally dichotomous. It can feel at times as though we have a choice to make as writers. On one hand there are “diverting” stories, driven by impulse, where the spirit of Dionysus urges a character to suddenly blow their life up, to indulge in some whim, to take a new lover they have just talked down from a ledge, and so on. And on the other hand, there is a kind of story that seems less welcome in our journals and anthologies lately, where the spirit of Apollo presides and the action of the story is driven by a sense of credible inevitability, what Aristotle called “internal causality.” This is the kind of story that takes place at the center of a character’s reality as opposed to at the limits of it, a culture of fiction that closely mimics life as we live it, where it could be said that both everything and nothing happens. The first option is formulaic and relies on an uninspired, calculated logic—insert your Iago character and boom, you’ve got yourself a prize winner. The second assumes a kind of stasis, as if meaning is derived more from contemplation of life than living it—also not true. It’s just not a choice I want to make as a writer.

Nietzsche believed German artists were stuck with a similar false-choice in the 1870’s: “a problem which we now place, as a vortex and turning-point into the very midst of German hopes.” Did it really seem that important? Does it now? Why does it matter that stories remain tethered, however inventively, to life as we know it? I think it matters because we need stories to remain in a constructive dialogue with the culture doing the telling if we are to stay on the empathetic rails. “Human beings are narrative animals: every culture countenances,” David Foster Wallace reminds us in “Fictional Futures and the Conspicuously Young,” and because of it, “we need narrative like we need space-time.”

“It’s so true it’s trite,” Wallace declared, and so the question becomes what kind of narrative? For Nietzsche, in the later half of the 19th century, the false dichotomy represented by these two cults had weakened the capacity for dramatic art to speak to German culture—he specifically wanted more people to love Wagner, but that’s a longer, more complicated story—and it seems that fiction writers today can either tell stories that have dramatic urgency but hardly remind us (or speak to) life as we live it, or we can tell stories that are perfectly credible, set in the center of our world and region, but ready to be returned with a note that reads: “Loved the writing but a little quiet for us.” 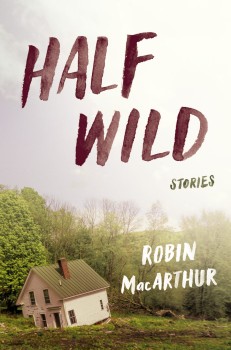 So, back out of all this now…. I’m thrilled to write that Robin MacArthur’s debut collection, Half Wild, published in August by Ecco, proves that we can have it all as readers and writers. I love these stories for this reason. They risk earnestness and credibility, they smolder with heart like a debut should. Read these stories and notice the instinct MacArthur has for blending both aesthetic cultures to create the mystery, the magic that makes stories more than “a readily dispensable jingling of fools bells” (sorry, more embattled Nietzsche).

In this collection a story is a thing that transports us paradoxically into a world we find strangely familiar, a fictional world that can speak to the real world. Even the collection’s title suggests the crucial alchemy that is, as Flannery O’Connor once put it, “totally unexpected, yet totally believable.” We could even say that the heart of fiction is to be half wild, and that the miracle of transformation from the proverbial to the transcendent happens whenever the reader accepts that the fragile paradox of the story’s making is akin to the paradox of her own life, a wholly marvelous, anonymous thing.

America’s ongoing and distant wars operate in this book within the same psychic space as the Greco-Roman gods, exercising horrible, irresistible powers, choosing some, sparing others. In “Karmann,” the centerpiece of this collection, the Vietnam war exerts the fate-like force as the young protagonist Clare comes of age and has to reckon with a boy she loves who has returned, and not returned, from the distresses of war. Jack is the mythic older brother of Clare’s best friend who embodies the natural freedom and purity of the landscape, but on returning, “his eyes were clouded over” and his beautiful nature degraded. The action that closes this story, as Jack and Clare are finally alone together, is both unexpected and inevitable. It is a full embodiment of tragedy, seducing us and Clare to continue to live: “Since then I’ve been all over…No place is like I imagined. Love is different too.”

Another powerhouse in this book, “Maggie in the Trees,” moves us again toward this fragile paradox, the inevitable yoked to the surprising, the known and the unspeakable. When it comes to this careful pairing, it helps that time is often jagged in these tales, and in this story especially. Like Sophocles, MacArthur enters the heart of the narrator’s aftermath, in medias res, as they say, before telling us how it all went down:

I can smell Maggie everywhere in here: black coffee, tree bark, skin. I can smell her in the couch cushions, in the half-size kitchen and in the dirty sheets of the bed where she lay down three times one day in August when outside it was near ninety and humid as drink.

These stories also express the long lasting relationship between tragedy and song. It was folk song, after all, that Nietzsche believed acted as the perpetuum vistigium, the permanent trace, of “the union of Apolline and the Dionysiac.” It could be that MacArthur’s background as a musician makes lyricism and song structures an expected response to the problem of living in a landscape that is vividly real and credible in a time of war and violence that seems unimaginable. But in the end it doesn’t really matter to me where a gift comes from. What matters is that the stories feel like regional tunes, like field recordings, secret proclamations captured:

And now it’s just me. And the horses. And the winter. And we’re getting by. And everything I thought that night about stumps and forever is true. Did you write that part down?

Or the ending of the final story, a story that displays a songwriter’s dependence on refrain to create unity:

Or these anaphoric, bluesy lines in “Creek Dippers”:

What is it about fields? The way they make all directions viable. The way they give houses, porches, voices, perspective. The way the word itself—field—makes you feel both domesticated and wild…

So we return again to the notion of the “real” and the problem we writers labor under, caught as we are in a custody battle between Dionysus and Apollo, between sincerity and drama, trying to always recover the importance of paradox. Perhaps it would be good for us to look for moments of insight in our fiction first, to see how keen a writer’s eyes and ears are, and to allow that to instruct us as readers about what kind of work is before us, about where it falls along the spectrum, the idiosyncratic way it will point us toward the world we live in. As James Wood reminds us in How Fiction Works, “this tutoring is dialectical. Literature makes us better noticers of life; we get to practice on life itself.” And when it comes to life itself, MacArthur doesn’t miss much; this sentence from “Wings, 1989” is one of my favorites in the collection, telling of how an intimate knowledge of the world can distill into language that is vividly awake and so capable of transferring its wakefulness directly to the reader. A daughter with her mother in the garden: “Wet dirt wedged under my finger nails and made them throb.” As John Casey wrote of Breece D’J Pancake in his afterward to Pancake’s collection, it is similarly true that MacArthur is a writer who knows “the powerful, careful gearing of the physical to the felt.”

There is knowledge in this book that seems bigger than MFA fodder, a living-out of the truths that the writing life uncovers and details that cannot be arrived at via Google. And there’s still so much in this book I haven’t gotten to: profound questions of belonging; the tension between regional and individual memory; the author’s insistence on probing the effects of living in a war-making nation on masculinity; the expert use of free-indirect discourse through out; the connective tissues of these stories, sharing resonant images and places and characters…and I wish I could keep going here, but the real importance of these stories to me, in this time, can’t be understated: we can have it all as fiction writers.

There’s a lovely exchange between a mother and her daughter in the last story that reminds me of yet another, related paradox, that tragedies are somehow the most heartening of stories. Nietzsche believed that through the careful blending of the disruptive and cohesive artistic cultures, dramatic art could create a new realm (schein) of neither belief nor unbelief, but of seduction. And that this new reality could “seduce us to live vividly” just as the mother in this final story seduces her daughter to go on living, because “life is still all honey. All honey.”