"Baseball, like books, in the right hands, becomes an expression of love."

The Art of Fielding, by Chad Harbach

In his powerful debut novel, The Art of Fielding, N+1 co-founder/editor Chad Harbach taps into the ephemeral baseball consciousness through a four-person starting rotation of narrators—all characters at a small, fictional, liberal arts school on Lake Michigan.

Baseball is a thinking man’s game. Strategic decisions, mountains of statistics, and deliberate sequencing converge on the field, transpiring into a kind of baseball rhythm before expiring into collective baseball memory. And, as far as pastimes go, it’s a pretty nostalgic one. Not unlike storytelling. 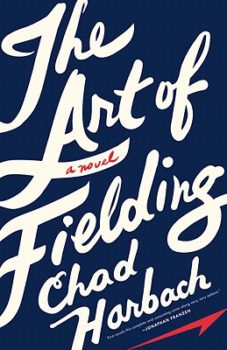 In The Art of Fielding, debut novelist and co-founder and editor of N+1 magazine Chad Harbach taps into this ephemeral baseball consciousness through four characters at Westish College, a fictional small liberal arts school on Lake Michigan. There’s the hot baseball prospect at shortstop, Henry Skrimshander; his catcher and mentor, Mike Schwartz; the school president, Guert Affenlight; and Affenlight’s once-estranged daughter Pella, returned to her father’s school after the dissolution of her marriage.

This four-person starting rotation, if you will, offers up infinite pleasures through alternating points of view, all in close third-person. The protagonists possess clear, distinct voices and lovable affects, rendered in prose as pristine as a freshly mowed outfield. Harbach is particularly effective at rendering the quirky particularities of a team’s collective personality, the nicknames (Buddha, Schwartzy, The Skrimmer, Suitcase) and superstitions (no haircuts before game day, the inspirational quote in the pre-game huddle, yoga on the field). The novel’s sense of humor is one of many reasons its appeal extends beyond baseball fans without disappointing die-hards.

On a micro level, the sense of place—a Midwestern college campus on Lake Michigan—feels rich and real. Harbach achieves this verisimilitude using clean, bright descriptions that are always clear and straightforward. The characters’ physicality highlights both setting and theme without weighing down the language, as in this locker room description: “As he twisted his combination lock in its casing, right left right, he could sense a gentle depression, like the hollow of a girl’s neck, each time he reached the right number.”

The same could also be said of the landscape:

Shreds of clouds blew past the setting sun, causing shadows to scurry rodentially over the grass. To his right rose the big stone bowl of the football stadium; to his left stretched Lake Michigan, which this afternoon was colored a deep slate blue that perfectly matched his bathroom floor.

And then, of course, there’s the narrative itself—that of a storied shortstop who comes upon hard times, and of those around him. The archetypes of College Novel and Baseball Novel are as well-worn as the path to first base, but the story isn’t solely restricted to the often clichéd worlds of sports or academia. Harbach introduces complex, intellectually engaged characters, well-versed in Melville and Emerson in particular, Eliot occasionally, Greek mythology often. Far from casual name-dropping, the characters’ ongoing dialogue with these canonical texts makes Moby-Dick et al. an integral part of the narrative itself. A college athletics setting allows for and appreciates the blending of sports and scholarship.

In a climactic example, the characters reenact a famous Emerson rite. At another moment, Affenlight broods on the post-modern “Prufrockian paralysis” of Bill Blass Disease, when a player’s mind keeps him from executing simple tasks on the field. In this way, baseball becomes like a literary trope, and the ghosts of literary greats like locker room legends. Dumb jocks these characters are not, nor geeky English nerds. And the story, as a result, is strengthened by the interplay of sports and words. By switching pitches in this way, between baseball-as-art and thought-as-play, The Art of Fielding elevates and transcends its classic subject matters:

For Schwartz this formed the paradox at the heart of baseball, or football, or any other sport. You loved it because you considered it an art: an apparently pointless affair, undertaken by people with a special aptitude, which sidestepped attempts to paraphrase its value yet somehow seemed to communicate something true or even crucial about The Human Condition. The Human Condition being, basically, that we’re alive and have access to beauty, can even erratically create it, but will someday be dead and will not.

Indeed, the title—which refers to a fictional retired-shortstop’s creed called The Art of Fielding—encapsulates this union of art and baseball. Schwartz, the team’s captain, is particularly aware of the parallels. At one moment, he muses on the idea of coaching as essentially story-telling:

All you had to do was look at each of your players and ask yourself: What story does this guy wish someone would tell about himself? And then you told the guy that story. You told it with a hint of doom. You included his flaws. You emphasized the obstacles that could prevent him from succeeding. That was what made the story epic: the player, the hero, had to suffer mightily en route to his final triumph. Schwartz knew that people loved to suffer, as long as the suffering made sense.

The Art of Fielding is a love-story many times over. We watch the President of the school fall for an undergrad he knows he shouldn’t. There’s affection between players, between unlikely lovers, for the game itself, and between father and daughter. But it is the universality of falling in love that deepens the narrative with urgent feeling:

Everything that floated through his life’s width—a sunny day or a sudden cloudburst, an e-mail from an old colleague, a conversation with Pella that didn’t turn into a fight—seemed loaded with such poignance that he found himself on the verge of country-music tears, and could cope with his own ridiculousness only by making fun of himself.

Baseball, like books, in the right hands, becomes an expression of love. But the cost of loving something too much is all too real here. When a routine throw to first seriously injures a beloved teammate, Henry’s faith in his art and in himself is irrevocably shaken. Over the course of the book, all of the characters risk serious consequences for that which they love most: loss of jobs, weight, friends, sanity.  The stakes are high.

Harbach has been compared to (and is blurbed by) Jonathan Franzen. In certain echoes, this makes sense, particularly when expounding on the dangers of freedom:

Henry knew better than to want freedom. The only life worth living was the unfree life, the life Schwartz had taught him, the life in which you were chained to your one true wish, the wish to be simple and perfect. Then the days were sky-blue spaces you moved through with ease. You made sacrifices and the sacrifices made sense.

But where Franzen can be cruel to his characters, and more than a touch melodramatic, Harbach’s is a more compassionate narrator; his characters never try your patience the same way or tire your nerves. The comparison between the two authors, outside of a couple coincidental parallels, doesn’t really hold up beyond that.

The fictional motivational volume The Art of Fielding (the book within a book) reads: “It always saddens me to leave the field. Even fielding the final out of the World Series, deep in the truest part of me, felt like death.” After spending five hundred pages with these memorable characters, it was bittersweet to let them go upon finishing the book. The Art of Fielding, like baseball or college, inspires wistful fondness after the action has ended. It’s the kind of book that insists on the local train instead of the express, even though there are six additional stops, because it’s just too good to put down.

As Schwartz observed about the Human Condition, we are all indeed alive with access to beauty. And in reading The Art of Fielding, this profound sentiment is brought home.