"The high stakes of war, the implications and consequences of employing atomic weaponry, remain relevant and resonant issues today."

"Beard’s story explores a unique domestic backstory in the development of the atomic bomb as experienced by both witting and unwitting participants."

Janet Beard’s new novel, The Atomic City Girls (Morrow), dramatizes a somewhat overlooked chapter in the annals of the Manhattan Project. Though history and fiction often focus on Los Alamos, secret research and development was also conducted at Oak Ridge, Tennessee, the clandestine site for the uranium enrichment plants, the liquid thermal diffusion plant, and the pilot plutonium production reactor necessary for the development of the atomic bomb. Beard’s well-researched account of daily life behind the scenes and headlines, daily life in a time and a place that would contribute to changing warfare and the world forever, attempts to inhabit and explore this other side and site of the story.

Oak Ridge, a hastily created facility, was the temporary home to 30,000 individuals. Beard depicts a hierarchical society with distinct classes and differing levels of privilege, security clearance, and hardship. By way of underscoring these distinctions, she tells the story from the perspective of several narrators, each representing a different part of this Oak Ridge community, and each possessing his or her own limited perspective and understanding of the secret goal of the work of the community. The characters’ human-scale stories are also interwoven with the powerful backdrop of a world at war, and the activities at Oak Ridge in the years leading up to the bombing of Hiroshima and Nagasaki are amplified and influenced by the historical moment. 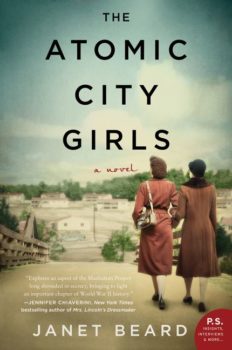 The primary narrator is June Walker, a young woman from Tennessee who goes to work at Oak Ridge after her fiancé is killed in the war. Secondary narrators include June’s roommate Cici, a social climber enjoying good times at Oak Ridge parties and determined to secure a wealthy fiancé; Sam Cantor, a Jewish physicist from New York; and Joe Brewer, a Negro—to use the novel’s parlance of the time—construction worker. Choosing to exemplify each type, class, or social group with an individual, Beard does run the risk of reducing her characters to stereotypes. But happily, one of the author’s strengths is an ability to develop rounded characters with distinctive personal perspectives, experiences, and convincing flaws and blind spots. She particularly excels at using internal monologue to convey the sometimes contradictory yearnings of each of her point of view characters. No one is as simple as she or he at first seems, nor one dimensional. The most arresting voice and subplot belong to Joe Brewer. The author provides unsentimental, detailed description of the conditions in which Joe lived and worked, the demands and risks he faced, and the inadequate recognition and compensation he received. The prejudice and injustice faced by African Americans participating at home and overseas in WWII is over-looked in popular historical fiction, but not in The Atomic City Girls.

Over the course of the story, each character in his or her way moves from innocence to at least partial knowledge of the ramifications, scope, and impact of the project. Scientist Sam Cantor’s change over time is particularly well-rendered. His mood upon arrival at Oak Ridge is ebullient: “He had the wonderful certainty that he was doing the very thing that he was born to do.” By the conclusion of the book, his response to the news that the bomb has dropped is ambivalent and muted: “Sam had the terrible notion that he might start to cry, even though he hadn’t cried in years.”

I recommend the book in particular to those seeking stories of World War II events behind the headlines, on the home front. Like Women of Los Alamos, by Tara Shea Nesbitt, Beard’s story explores a unique domestic backstory in the development of the atomic bomb as experienced by both witting and unwitting participants. The high stakes of war, the implications and consequences of employing atomic weaponry, remain relevant and resonant issues today. I found this novel an informative portrayal of a significant historical episode often reduced to footnote status.

Happily, The Atomic City Girls is also a good read. Beard manages to imbue this well-researched novel with warmth and charm. The book also feels personal rather than academic or dry, maybe owing partly to the fact that the author’s aunt work at Oak Park. Perhaps by way of homage to her relative, Beard makes the interesting choice of choosing to illustrate the novel by inserting photographs from the Department of Energy archives.  While these photographs of Oak Ridge residents at work and at play are delightful and closely tied to the action and themes of the narrative, I found them ultimately a distraction rather than an enhancement. In memoir and biography, and less frequently in fiction, photographs can serve to underscore the author’s accuracy and amplify the reader’s understanding. Here, however, the photographs don’t seem essential to the work. As a reader, I tend to like my fiction straight and enjoy the opportunity to see a well-presented novel’s world like this one with my mind’s eye.

Either way, Beard has a good story to tell, and tells it well.