"Ultimately, The Dream Life of Astronauts is a book about people, about these characters steeped in place and time. "

"This collection, as a whole, is not about the Space Age, per se. Still, that place and time exquisitely inflect each story."

Five years ago, on July 8, 2011, the last space shuttle mission launched from Kennedy Space Center in Florida. The United States has not launched humans into space since. It’s no coincidence, then, that the publication of Patrick Ryan’s lively new story collection set on Florida’s Space Coast syncs up with this anniversary. With both humor and heart-wrenching instants, Ryan’s The Dream Life of Astronauts (The Dial Press) recalls the Space Age during which the Apollo program and then the space shuttle program were humming in the background of our lives.

Two stories draw directly from the goings-on at Kennedy Space Center. The title story revolves around a teenaged boy who grapples with his emerging sexuality just as he is befriended by a retired Apollo astronaut. Though he never traveled to space, the aging astronaut still banks on the cache of his title and stirs curiosity in young Robbie. The other, “Go Fever,” takes place roughly a month after the Challenger accident in 1986. The demands of the job on the friendships and marriages of space workers have long been the stuff of real life on and of lore about the Space Coast. The main character in this story carries the burden both of participating in sending the Challenger astronauts to their deaths and also of sleeping with his co-worker’s wife.

This collection, as a whole, is not about the Space Age, per se. Still, that place and time exquisitely inflect each story. The texture, though fictional, of Cocoa Beach, Titusville, and Merritt Island permeates the stories. From the school named for an astronaut to the ramshackle motel to the assisted living facility, the reader is drawn into this humid place where people stick and unstick. 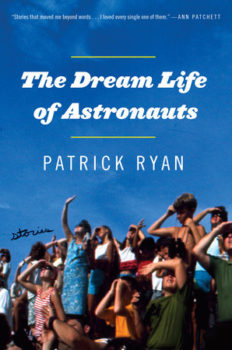 Ryan uses cultural references liberally as well. The book opens during the Watergate hearings, with Sam reading a Hardy Boys novel. Characters watch The Waltons and Ironside, play Pick-Up Sticks and Yahtzee, sit in beanbag chairs, and listen to Starship’s “Nothing’s Going to Stop Us Now.” The Yugos in “Miss America” are the ones we laughed at (and some 140,000 Americans drove) in the late 1980s. As a result of this rich texture, readers are likely to become immersed in their own memories of that not-too-distant past as well as in the experiences of the characters on the page.

Ultimately, The Dream Life of Astronauts is a book about people, about these characters steeped in place and time. Ryan’s characters face pivot points in their lives, moments in which they want something they don’t get and then see what they can salvage or create anyway. When the narrator of “Fountain of Youth” reveals that a person “can be somebody one minute and nobody the next, full of yourself in the morning and empty as a tapped well in the afternoon,” he speaks for the collection. Often a character doesn’t have all the information, is too young to fully grasp what’s going on, or doesn’t know who he or she is anymore. Yet each must respond nonetheless; each has a sense of “who I want to be.” Though the resolution is always partial, the boy in the first story comes of age, and the woman in the last story comes to terms with aging.

One character in “Miss America,” who embarks on a potentially dangerous lark to visit a supposed talent scout with her friend, sums up the dilemma of many of Ryan’s characters, saying, “I don’t have the space in my head to make room for it.” Later, she describes her response to an argument with her mother in ways that echo across the book: “You know how when you first wake up, it takes a few heartbeats for your life to come back to you, and how that’s not always such a pleasant experience?” Every central character in this collection faces such a necessary, uncomfortable moment. Most people do in real life, too.

The intersections among Ryan’s stories add a rich layer (and sometimes bonus Easter eggs) to the overarching exploration of life’s pivot points, happenstance, and partial resolutions. The sensation that, even as each of us is isolated, we’re all connected haunts these stories and makes the heart skip a beat before relief.