"Seabrook invites us to experience from the inside the intersection of Carroll’s imagination with Dodgson’s life."

The Imagination of Lewis Carroll, by William Todd Seabrook

Given the vast quantity of Alice/Carroll-inspired work, the reader might wonder: “Is there anything new to add?” Here, happily, Seabrook proves it is still possible to make an original contribution.

The Imagination of Lewis Carroll, by William Todd Seabrook (Rose Metal Press), joins the canon of music, art, theater, musicals, movies, new editions with new illustrations, and psychological studies inspired by Carroll and his 1865 masterpiece, Alice in Wonderland. Why does a children’s book which appeared almost one hundred and fifty years ago generate such perennial industry? It is due in large part to Carroll’s genius as a shrewd, comic fabulist, a master of riddles and puns, of allusion and illusion. But the enduring appeal may also be attributed to the intriguing duality and complexity of both the story and its teller.

Lewis Carroll’s Alice begins with a by-now iconic scene of lyric natural realism: a summer picnic on a golden afternoon. Then, famously, Carroll drops Alice down the rabbit hole and the reader falls with her into a house-of-mirrors world where the organizing principle is that of logical nonsense. There is a parallel sharp contrast between the author’s exterior and interior life. Rev. Charles Lutwidge Dodgson, clergyman, logician and professor of mathematics at Oxford University, was also Lewis Carroll: fantasist, photographer, and the (probably chaste) lover of little girls, some of whom he photographed in the nude.

Given the vast quantity of Alice/Carroll-inspired work, the reader might wonder: “Is there anything new to add?” Here, happily, Seabrook proves it is still possible to make an original contribution. He explores Carroll’s imagination through a chapbook of flash fiction stories which illuminate Carroll’s creative process. Events or moments in Dodgson’s life serve Seabrook as openings—rabbit holes—into the feverish mind of Lewis Carroll. Snippets of biographical fact, or quotations from Alice, become springboards for fictional vignettes and unfold like dreams inspired by experience. For example, here is Seabrook’s own lyric, naturalistic opening passage: “The day was so hot it melted the gold out of the clouds, and Lewis Carroll rowed the three Liddell sisters, Lorina, Alice, and Edith, up the winding Thames.” Next, within a matter of sentences, Seabrook drops the reader down the rabbit hole into a dream world replete with echoes, reflections, and references to Alice:

Carroll’s vision started to dim. The far bank became a fuzzy haze, and even the faces of the Liddell sisters faded, until all he could see were their smiles. Soon he couldn’t even see the oars in his hands or the numbers on his pocket watches, and when he looked up, the sisters’ floating grins had disappeared.

This is plain but magical prose—like Carroll’s.

I have, however, one concern in regard to Seabrook’s authorial choices and the presentation of these stories. First, though, a lengthy personal aside, in the tradition of Victorian authors as well as the spirit of full disclosure.

Carroll had his obsessions. I have mine: Alice in Wonderland. As a child I lived in Oxford for a time, one hundred years after the Liddell girls went punting with Rev. Dodgson. Later, forty-six years ago, I became one of the millions of girls who have played Alice in amateur dramatizations. But I was, I believe—correct me, dear reader, if I am wrong—the first and only to perform as Alice in the world premiere/world finale of a dramatized version of The Annotated Alice, Martin Gardner’s 1960 concordance on Alice’s Adventures in Wonderland, in which Gardner juxtaposes the full text and original Tenniel illustrations with side-bar commentary. Scene-by-scene, riddle-by-riddle, he explores and explains the back-story: the political, cultural, and biographical context of Carroll’s Alice. Gardner, among other accomplishments, wrote the “Mathematical Games” column for Scientific American. He had a sensibility well-suited to Carroll and Alice. As does Thom Feild: director, dramaturge, and writer for the aforementioned world premiere of The Annotated Alice. 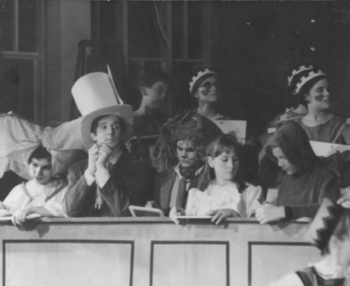 Ellen Prentiss Campbell playing Alice in Thom Feild’s 1968 Melrose Theatre production of The Annotated Alice, pictured in the Trial scene with the March Hare and Dormouse on either side in the Jury Box.

Thom was the teenage impresario behind Melrose Theatre, a kids-only troupe who originally performed  in his basement. My friend Judy Karasik lived around the corner from Thom’s house on Melrose Street in Chevy Chase; her older brother Michael did lighting for him. I attended Thom’s dramatization of James Thurber’s The Thirteen Clocks and was hooked. Thereafter, Judy and I showed up at auditions for every show. Melrose Theatre, and the kids who gravitated to Thom’s ambitious projects, became a colorful oasis for me during junior high and high school. M.T. was a collaborative workshop of collective effort catalyzed by Thom’s infectious vision, one scrutinized and polished (sometimes to our dismay) by his perfectionist’s eye. There was energy and artistry in every aspect of the shows from costume and set design to the silk-screened posters. Here is Thom describing the theater in program notes: “Independent of parental and school sponsorship, we are able to be freer and more creative in our productions” and to select “plays that leave margin for imagination.” Indeed! Productions included a triple bill of Ionesco’s The Bald Soprano; Albee’s American Dream; and Almost Like Being, van Italie’s send-up of Rock Hudson and Doris Day; as well as Thom’s original dramatizations of Norton Juster’s The Phantom Tollbooth and The Borrowers, by Mary Norton.

Thom directed Alice in the summer of 1968, the hey-day of “don’t trust anyone over thirty,” and we were all well under twenty. The company had progressed from performing in Thom’s basement to the  Unitarian Church on Cedar Lane. For the first nights of our short run, we did Alice in Wonderland straight—or as straight as any teen in 1968. But August 10 was show-time for Annotated. “Premiere performance! For Adults! One night only!” says the publicity flier I pasted in my diary. (Yes, as you can see, writing this review has sent me down quite a rabbit hole.) “See how an expert examines the many hidden curiosities of Carroll’s writing.” Tickets were $1.50, and pre-orders were recommended ‒ “Alice is going to be a sellout!” My to-do list written after dress-rehearsal reminds me to bring safety pins, practice my lines, and live for the moment.

We played Annotated in live stop-action: scenes, then freezes while the spot-lit narrator read Gardner’s explanation of the historical, cultural, and biographical back-story. August 10, 1968, was a sticky Washington D.C. summer night, according to my diary. “Weather beastly but no one passed out…Plenty of technical difficulties but I think we had enough spirit so that the audience enjoyed it as much as I did.”

Ever since that production, I have been both collector and recipient of Alice-iana–mostly from my brother Don. (My sister-in-law Catherine remarked recently, “Do you think it’s possible Ellen might be tired of Alice gifts?” Never!)  My archive includes The Nabokov Russian Translation of Lewis Carroll’s Alice in Wonderland (Dover, 1976); Bryan Talbot’s graphic novel Alice in Sunderland (Dark Horse Books, 2007); a facsimile edition of the original 1865 Alice (R.Clay, Son, And Taylor, Printers); a facsimile edition of the 1907 edition with Arthur Rackham’s drawings (A Studio Book, Viking Press, 1975); an art-book edition illustrated by Anne Balelier (Neil Zukerman/CFM Gallery, 2005); a Swedish children’s book called The Other Alice: The Story of Alice Liddell and Alice in Wonderland (R & S Books, 1993); a dark, hallucinogenic movie version of “Alice” directed by Jan Svankmajer in 1988; a novel called Alice I Have Been, by Melanie Benjamin (Random House, 2010), written from the point of view of Alice Liddell at age 81; and (treasure of treasures) a Riverside recording on four LP’s of Cyril Ritchard reading and singing Alice accompanied by Alec Wilder’s original music for woodwinds and percussion. Thom obtained permission for us to use Wilder’s music; I’m far from the only obsessive in this story. 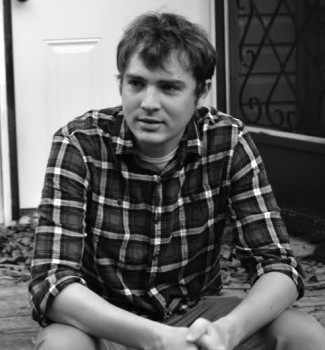 So, you get my drift. There’s a lot of Alice stuff out there, wonderful and terrible. I assume Seabrook is familiar with some of it. His publisher’s frontispiece note says, “This book is a work of fiction based on a real person and refers to some actual events.” Well and good, but although Seabrook’s subject is Lewis Carroll’s imagination, and Seabrook’s work is an original imaginative creation in its own right, I think it would have been of interest to the reader, and appropriate, for Seabrook to acknowledge his significant sources–perhaps by including a brief bibliography. I don’t make this suggestion in the interest of transforming magic into pedantry, nor with the intention of spoiling illusion by revealing springs and clockwork. As Michael Martone says in his introduction, Seabrook “makes strange again the received strangeness of Carroll and his cohorts and records, in brilliant shorthand…, the long game of the culture of the cultured cathedral of wordy words.” Seabrook invites us to experience from the inside the intersection of Carroll’s imagination with Dodgson’s life. Seabrook plays with and becomes Dodgson/Carroll. I applaud Seabrook’s originality. But with his unique contribution, Seabrook does join an ensemble of others inspired by Carroll’s “long game” of word play. I wish for just a few program notes, as it were, about Seabrook’s “cohorts,” his supporters back-stage and off-stage.

But with that caveat aside, The Imagination of Lewis Carroll is a delightful read. I enjoyed the slim, beautifully produced volume (winner of the Rose Metal Press’s Short Story Chapbook Contest) on a summer’s afternoon rather like the one when Rev. Dodgson went punting with the young daughters of his Oxford colleague and began the tale of Alice’s tumble down the rabbit hole into a rule-ridden but arbitrary world of Queens and Pawns, dissolving Cats, floods of tears, croquet games played with flamingo mallets, Tea Parties and courtroom Trials. Seabrook is at his best in the glancing, elliptical descriptions of single moments. With just a few words, he reveals volumes:

Alice Liddell slipped her dress back over her head and watched Lewis Carroll mix two photographic solutions…Alice smiled as the outlines of her bare body appeared under the ripples of chemicals. “There are two of me now,” Alice said, “I wonder if this Alice likes croquet too.”

Passages like that make The Imagination of Lewis Carroll require and reward re-reading. Sample it, if you can, while reclining in a punt, floating down the Cherwell River in Oxford.