The Invention of Everything Else, by Samantha Hunt

Filled with wonder and a sense of infinite possibility, Samantha Hunt’s second novel, The Invention of Everything Else, celebrates the boundless human creativity suggested in its title. 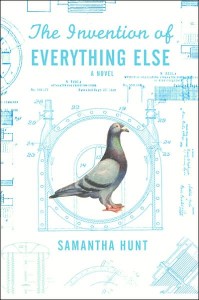 Filled with wonder and a sense of infinite possibility, Samantha Hunt’s second novel, The Invention of Everything Else, celebrates the boundless human creativity suggested in its title. Each character becomes enthralled by the act of creation, from the scientific genius of its hero, a brilliantly imagined Nikola Tesla, to the furious activity of New York City at the turn of the century, to the emergence of love between the chambermaid Louisa and the mysterious Arthur Vaughn. As well executed as any of the experiments she describes, Hunt’s language shimmers with pitch-perfect description and pacing punctuated by flashes of surprise. Hunt maintains that satisfying element of mutability throughout a story that follows two main protagonists, the Serbian-born inventor, Nikola Tesla, and Louisa, a young hotel maid whose curiosity leads her to Tesla’s room at The Hotel New Yorker. In The Invention of Everything Else, Louisa and her widowed father Walter share a memory-crammed apartment in 1943 New York. Walter has refused to alter anything since Freddie, his wife, died giving birth to Louisa. With his job as a night guard at the New York Public Library, Walter creates a magical existence with his daughter, one in which they ride the train to Long Island with their homing pigeons to time the birds’ flight back to their perch, or enjoy a midnight stroll through the cavernous reading room of the library. Tesla tells his part of the story in the first person, a conceit that only lends to the mysterious, godlike qualities that Hunt relays elsewhere through Louisa’s perceptions of the aged inventor. Rooted in the solid ground of history, Hunt weaves in the complex personalities that surrounded Tesla – Thomas Edison, Century Magazine editor Robert Underwood Johnson, and Samuel Clemens, Tesla’s close personal friend. In conversation with Samuel Clemens, Tesla says, “Extraordinary things happen all the time even when we’re awake. What I mean to suggest to you . . . is that there is only one world. This one. The dream is real. The ordinary is wonderful. The wonderful is the ordinary.” In Tesla’s universe, a lack of imagination, not potential, restricts progress, invention, even inscrutable human relationships. Louisa can befriend the misanthropic Tesla because she comes to him without expectation or desire for personal gain. Tesla considers one of the wild pigeons in Prospect Park his wife and holds quite moving conversations with her that feel wondrous and convincing, even if the reader can infer the addled mind behind them. Walter believes without hesitation that his best friend Azor has created a working time machine. Belief plays a vital role in the success of an endeavor, with exquisite results, not just radio transmissions, or Tesla’s AC current, but the conjuring up of sacrifice and, ultimately, love. Hunt plays beautifully with the liminal, her characters all smitten by the whiff of greatness just out of reach and the pleasurable pain of delayed gratification. As Walter falls in love with Freddie, “He loved the moments before getting what he wanted almost more than he loved getting what he wanted. He had time. They both did.” Possibility stands in for openness, bravery and freedom. Tesla finds this imperfectly in man, but fully present in his pigeon wife:
When once I tried to explain to her what it meant to worry, she said, “I don’t think birds do this,” after listening to my description. And of course they don’t. Birds are unspoiled by worry, that grave imperfection that keeps humans heavy, keeps us from flight.

New York City, itself a major character in the novel, embodies this idea of opportunity unfettered by needless anxiety. From the explosion of ideas at the turn of the century –Edison’s workshop, the introduction of electricity, radio, the telegraph – through the early 1940s when the main action of the book is set, the city throbs with life and change, endless construction atop the backs of the buildings, ideas and people who came before. The Invention of Everything Else paints a portrait of a brilliant man who struggled against misunderstanding for nearly a century. Interlopers claimed his greatest discoveries. Edison, Westinghouse, Marconi and others earned the money and fame due his creations. True understanding and friendship most often eluded him. Photographs of Nikola Tesla show a spare, serious face with a lurking hunger behind the gaze, a restlessness that intensified as the inventor grew older. Samantha Hunt captures the burning intensity of Tesla’s mind as it endured the cold ignobility of growing old. The vibrancy of each character, from Louisa’s curiosity to Walter’s exuberance, lends the novel its own electricity, charging each page with the alternating currents of joy and loss. As Walter thinks lovingly back on his few years with Freddie, he muses, “Nothing was too small for her wonder.” The same can be said of The Invention of Everything Else, and what a rich and wondrous view Hunt’s story affords.