Daniel Chacón's Hudson Prize-winning collection, Unending Rooms, is smart and charming, fascinating and frustrating by turns. Like that of Borges, Chacón's fiction springs from a powerful intellect at play, but in the latter's case that rich intelligence sometimes elevates concept over character. 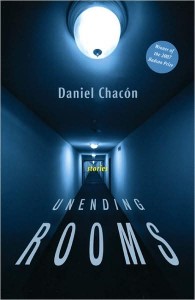 “Page 55,” a story from Daniel Chacón’s Unending Rooms (Black Lawrence Press, 2008), illustrates both the promise and some of the problems of the collection as a whole. The story’s unnamed narrator grows convinced that the old book he’s just purchased holds a mystical power over his future: “I believed that as many pages of the book that I read was how long my life would be. If I only read to page 55, I would die at age 55.”

Over the course of a quick six pages, the narrator buys his book, sits down at an outdoor café, and reads and thinks. Little else happens. Once the narrator opens the book, references to an exterior fictional world slowly tail off; the reader is instead faced with a stream of interiority, as within the narrator’s thoughts the story’s premise is unpacked and subsequently ruminated upon.

The problem here is not plotlessness per se, but rather the elevation of concept over character. To Chacón’s credit, the story’s central metaphor is interesting and nuanced: “What if the way we read a book is the way we live our lives?” the narrator wonders.

If we can’t stand the reading and are always looking toward the bottom of the page . . . surely we must live life the same way, impatient with a walk in the city or with sitting in a garden, wanting only to arrive, never to be.

But how and why this particular narrator chooses to construct this particular metaphor is never explained; such questions are glossed over with phrases like “An idea suddenly occurred to me . . .” and “I don’t know why I felt this, but . . .” and “for some reason—some stupid reason—I was struck by the idea that . . .” and again, later, “some idea struck me . . .” and so forth. In this way, the narrator comes to exist less as flesh, blood, and emotion on the page, and more as simply a series of fictional signposts directing the reader through a non-fictional, philosophical landscape.

Like “Page 55,” Unending Rooms is itself fascinating and frustrating by turns. Chacón welcomes comparison to Jorge Luis Borges—the collection’s closing story is titled “Borges and the Xican@” and features a Mexican-American writer named Daniel, as well as footnotes citing invented referents à la Borges. But even Borges’s most conceptually elaborate works are essentially character-driven. What would remain of “Pierre Menard, Author of the Quixote” or “The Library of Babel” without the humanity of their narrators—the former a prickly intellectual flying to the defense of a fallen and ridiculous comrade, and the latter an old man mired, at the end of a long life, in existential sadness? Like that of Borges, Chacón’s fiction springs from a powerful intellect at play, but in Chacón’s case that rich intelligence sometimes produces characters that feel flattened beneath the weight of interesting concepts, narratives more daring in premise than in execution.

Like the Borges of “The Gospel According to Mark” and “The South,” however, Chacón is also capable of writing in a more naturalistic mode, and it is here that Unending Rooms is at its best. In “The Day They Discovered Rain,” another unnamed narrator, this one a Mexican-American marooned in Minneapolis, grows so obsessed with converting his apartment’s spare room into the perfect library that he never gets around to reading any of his books; his vision for the future, the reader slowly comes to understand, has grown so weighty that it has hobbled his ability to enact it. A helpless dreamer, he is as “seduced by images” as the Mall of America shoppers he at one point derides.

Other stories in this vein—“Mean Looks” and “Americano” are perhaps the strongest among them—similarly probe the Mexican-American experience. But like the collection’s more concept-driven pieces, some of these stories feel static: rather than construct dynamic narratives in which circumstances and characters change, they detail compelling situations for the reader’s perusal. Yet static or not, the situations Chacón chooses to explore are indeed interesting.

Which leads, finally, to the essential paradox of this collection: Unending Rooms is often smart and charming, engaging and fun—but it is precisely because the book possesses these appetite-whetting qualities that it leaves me hungry, in terms of character development and narrative payoff, for more.

Visit Daniel Chacón’s website to learn more about the author and his other books.

Unending Rooms was awarded the 2007 Hudson Prize; 2008’s winner was poet Abayomi Animashaun, for The Giving of Pears. The prize’s 2009 deadline has passed, but if you have a previously unpublished book of poems or stories, keep an eye out for 2010’s guidelines and dates.