"The collection offers the reader a chance to see an expert storyteller in action."

Why, Why, Why? by Quim Monzó

"Over its thirty tales, Why, Why, Why? further solidifies Monzó’s reputation as a master." Benjamin Woodard reviews Quim Monzó's latest collection in translation from Open Letter Books.

Over the last decade, Open Letter Books and translator Peter Bush have released a trio of slim story collections by Catalan writer Quim Monzó. The most recent—the darkly funny Why, Why, Why?—surfaced in late 2019, and like its siblings, it contains the same pull quote from The Independent on its cover, which proclaims Monzó as “one of the world’s great short-story writers.” High praise, and yet over the span of these books, lovers of short fiction would be hard pressed to disagree, for Monzó writes with a keen sense of humanity and the absurd. He fluctuates between realistic and fantastical scenarios, and is often able to capture his clever narratives in just a few pages. His stories consistently impress, and over its thirty tales, Why, Why, Why? further solidifies Monzó’s reputation as a master. 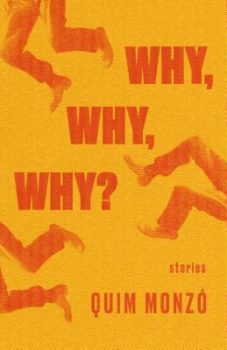 Originally released in 1993 as El perquè de tot plegat, the collection thematically revolves around desire and regret, and often, stories skillfully engage with narrative reversals and epiphanies. Sometimes these occur in the very last lines of the story, as in the collection’s opener, “Honesty,” where a nurse tries to dump a patient off on a coworker so she can leave for a romantic date. When a handsome doctor eventually comes to her rescue, his flirtatious looks lead to the nurse canceling the date and wondering how she might instead seduce the doctor. In “Admiration,” a woman falls in love with, as Monzó names him, an “abstruse novelist.” They marry, start a family, and the novelist takes a job in advertising to pay the bills. He abandons his creativity, and in turn his wife falls in love with a new novelist. “Strength of Will” concerns a man trying to teach a stone to speak. After many attempts, and in a fit of rage, he throws the stone away, only for it to land far away and say, “pa!” And in “The Toad,” a prince dedicates himself to finding his ideal mate via kissing a toad. Once he does, the amphibian turns into a beautiful princess, and the following banal exchange occurs after the initial excitement expires:

In each of these stories, reversals and epiphanies function as cruel punch lines, yet in “The Menstruation Cycle,” narrative reversals come much earlier, and more often. Here, Monzó sends a handful of characters on a series of realizations as they break up with old lovers, take up with new paramours, and then pine for those they left behind. The carousel spins each through a gamut of humorous emotional scenes, jumping back and forth between partners, while sharply commenting on the superficial nature of some starry-eyed relationships.

Of course, not every story in Why, Why, Why? hinges on reversals, yet each features moments of terrific writing technique. Two contenders for best of the bunch come with the collection’s two longest stories, “Trojan Euphoria” and “Half-Twelvish,” which appear in the center of the book. The first emphasizes Monzó’s gift for incorporating time compression in his writing, as he sketches out short, paragraph-long sections that send his male protagonist down a path of eventual destruction. What starts as a regular day turns to the man losing his family, his job, his arm, his home, and his city. Initially, seconds pass from one section to the next, but then Monzó shifts to minutes, and then hours, and then seasons, yet the alternating moves feel so casual that the careful construction is only obvious upon a second or third reading. Take this short excerpt within one early section, where time signals abound:

The next morning, the man . . . is quick to take his car to the garage. It’s only a week till the holidays and it must be ready for then. They tell him to pick it up in two days’ time. He rings the mechanic two days later to see if it’s ready.

As you can see, Monzó creates four time shifts in four short sentences: one day forward to the garage, ahead one additional week, back one week to the garage, and finally ahead two days. It’s an impressive feat, and the author manages to pull off this trick repeatedly within the narrative, resulting in a satisfying rollercoaster experience for the reader. 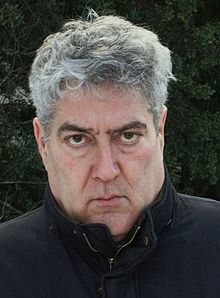 Within “Trojan Euphoria,” Monzó also subverts traditional methods when unveiling character backstory. As in most of his writing, the protagonist here is not referred to by name, but by personal characteristic: “The man who experienced a degree of religious faith as a child.” And as the man segues from one seemingly innocuous situation to the next, his bad luck leading to his life crumbling around him, Monzó reveals the man’s history by plugging in new characteristics to his description. Soon, the man is one “who’d been interested in mathematics as a child, as well as enjoying a degree of religious faith,” and as the paragraphs accumulate, he becomes “The man who had his first girlfriend at the age of fifteen,” “The man who received his first paycheck at sixteen,” “The man who didn’t finish his masters,” “The man who regularly played foosball for three years with his work colleagues,” and so on. With each new addition, Monzó rounds his character in a playful manner that carves out an element of pathos in the reader while nodding to the title image of a Trojan horse: an innocent object containing more than one expects.

The second story at the collection’s center, “Half-Twelvish,” is presented almost entirely in dialogue. This is not the only story in Why, Why, Why? that uses dialogue to propel its plot, yet it is the most accomplished, as the author establishes a well-worn premise and pushes it to unexpected extremes. In this case, the two voices in conversation are secret lovers speaking over the phone. The woman claims to be calling from a pay phone (though she switches to a bar mid-story), and the man is at home with his wife. When the man’s wife is in earshot, he changes his patter to pretend he’s speaking to a male friend about cars, and when the woman’s partner draws near, she pretends to be talking to a female friend about books. The shifts are funny, and they perfectly collide when both lovers are forced to speak in code at the same time:

“Hey, I told you. It uses much less gas than the other one.”

“But the heroine of Love in the Afternoon is much more realistic.”

“But that was in We’re All Equal Now. Right?”

The entire conversation is a seminar in diversion, as the duo veers around simple answers, yet Monzó uses this story to lampoon the very premise of the “secret lover phone call” by making bizarre narrative leaps, as well. To say much more would ruin the pleasure of reading the story, but it is safe to say that by the end, both characters admit to a fair amount of smoke and mirrors. Nothing is as it seems.

Though not every story in the book sticks the landing, the collection offers the reader a chance to see an expert storyteller in action. The metafictional closer, “The Story,” spotlights an author who writes the perfect story, but when he cannot conjure a suitable title, he destroys the pages, “rip[ping] them down the middle.” For short story lovers, we can be glad Quim Monzó has refrained from punishing his own work with such obliteration, and in Why, Why, Why?, Open Letter Books continues its streak of bringing the author’s strange and sharp stories to English audiences.