After 18 Years, Train of Thought Comes to a Halt

Whenever I’m in NYC, I love riding the subway. It’s cheap. It gets you (almost) anywhere you need to go. You get to see a wide spectrum of people: the crazies, the businesspeople, and everyone in between. And, possibly best of all, the subway cars had literary quotes. You’d sit there, waiting for your stop (because of course you ended up on the local), looking up idly at ads for banks and special gym deals, and suddenly you’d see a quote by T. S. Eliot or Franz Kafka. The MTA’s “Train of Thought” program was an extension of an earlier program, Poetry in Motion—both, according to the MTA, “initiated as a service to MTA customers, a way of delivering a bit of joy and enlightenment along with the ride, and encouraging people to seek out more poetry.”

Now, sadly, the Train of Thought Program is being discontinued. The New York Times reports:

In its stead is a new promotional campaign by the Metropolitan Transportation Authority that is intended to highlight recent improvements to the transit system. A spokesman for the authority said there was not enough space for both.

The loss of the literary placards, which have offered a reprieve from the usual advertising array of laser acne treatments and injury lawyers, marks the first time in 18 years that the subways will not feature a pinch of erudition. Poetry in Motion, the original verse-only series that spawned popular books and copycats in other cities, ran from 1992 to 2008, before being succeeded by the current program.

Some had criticized the selected quotes for being too gloomy. But the replacement placards, though upbeat, are hardly inspiring: 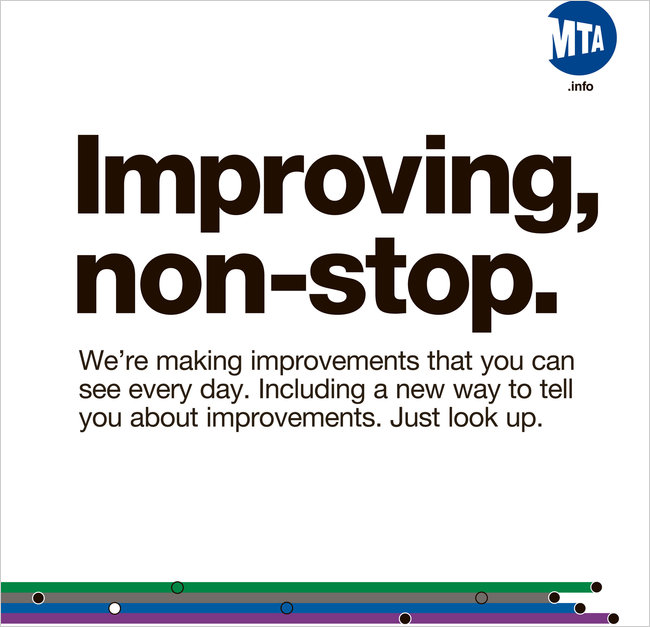 Not all literature is vanishing from the MTA, however. The “Train of Thought” series on the backs of Metrocards still offers riders a moment of poetry for the morning commute.