Writers are sometimes a shy bunch, but two recent writing-related mysteries take that to a new level. Call it “stealth lit,” maybe.

Case #1: The Mysterious Incident of the Sculptures in the Libraries
Intricate sculptures carved from books have been appearing in Scottish libraries. Way back in March, the Guardian reported on the first occurrence:

A tiny tree has taken root in the hearts of librarians at the Scottish Poetry Library.

None of the staff at the Crichton’s Close library know who left the fragile paper tree on a table among their bookshelves.

It was discovered by Julie Johnstone on Wednesday morning, sparking a flurry of intrigue and excitement among her colleagues.

They have nicknamed it the ‘poetree’ and thanked whoever made it on their blog.

And since then, several more sculptures have surfaced, including a tiny gramophone and coffin in the National Library of Scotland, a paper cinema–with figures jumping right out of the screen–at the Filmhouse, and a hatching dragon at the Scottish Storytelling Centre. Central Station has a good summary of the clues so far, along with tons of photos.

In late September, the Edinburgh Evening News claimed to have discovered the sculptor’s identity, but most people say they don’t want to know. 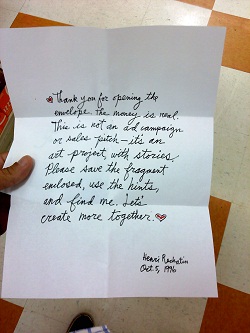 Case #2: The Mystery of the Narrative Urge

On this side of the pond, authors and publications have been receiving little packages with a $10 bill, a numbered excerpt, and a note encouraging the recipient to “Follow Your Narrative Urge.” Debbie Michaud of Creative Loafing in Atlanta, recipient of the first note, breaks down the package she received:

1. An envelope inside the manila envelope, one of those standard white business envelopes with a clear cellophane address window revealing a $10 bill. On the front of the envelope it says: “for you.” On the back: “Follow your narrative urge! #14.”

2. A note, bookended with hearts, that reads:

Thank you for opening the envelope. The money is real. This is not an ad campaign or sales pitch — it’s an art project. Please save the story fragment enclosed, use the hints and find me.
Let’s play.

Other writers have gotten similar packages in Chicago and Minneapolis as well. Many of the notes are signed “Henri Rechatin, 1996,” which seems to point to this unusual video:

8 Hamilton Ave summarizes the clues so far, including the existence of a mysterious entity that takes credit for the mailings–but has yet to reveal its identity. Intrigued? Visit Narrative Urge’s Facebook page or the wiki that has sprung up to solve the mystery. (Via.)