Recently Bitch Magazine published a list, “100 Young Adult Books for the Feminist Reader,” and it includes a lot of great titles I was happy to be reminded of, including classics like A Wrinkle in Time, Harriet the Spy, and The Golden Compass, as well as novels by Ursula LeGuin, Judy Blume, Cynthia Voigt, and other very contemporary selections like The Hunger Games and Scott Westerfeld’s Uglies. I was surprised by the number of books on the list I hadn’t read, including three titles (Sisters Red by Jackson Pearce, Tender Morsels by Margo Lanagan, and Living Dead Girl by Elizabeth Scott) that caused a quite a brouhaha after some commenters complained about their suitability and the magazine removed them from the list.

In a comment now buried the magazine stated: “We’ve decided to remove these books from the list — Sisters Red because of the victim-blaming scene that was discussed earlier in this post, Tender Morsels because of the way that the book validates (by failing to critique or discuss) characters who use rape as an act of vengeance, and Living Dead Girl because of its triggering nature.” You can read a summary of the controversy over at “Smart Bitches, Trashy Books,” which points out that any feminist book list published online is going to attract some comments. After Bitch removed the books from the list, many commenters accused them of pandering to criticism and some authors, Scott Westerfeld among them, asked to be removed from the list in solidarity. In an effort to undo the damage, Bitch issued this statement, and is starting an online book club. Readers can choose five titles to read and discuss online, and the ten books readers can vote on include the books they removed. The magazine has not, however, apologized for changing their minds about those books, or for publishing an original list that it seems they didn’t research very well, at least not to their own satisfaction.

I originally wrote a post praising the creation of the first version of the list, and then when the debacle erupted, held back that post to see how the digital brawl developed. One interesting aspect of that waiting was reading the numerous calls for Bitch to recant, restore the books immediately, and otherwise be ashamed of themselves. In reading their latest statement I was struck by two things: first, it’s much more considered than their original response, and is trying to start a real conversation, not to end one–which takes time. In the flash-bang culture of the web, it’s often easy to forget that stepping back and waiting a few days is usually a better response than instant action. Second, I was reminded that the staff of Bitch is very small, and that they are probably overwhelmed by work like the rest of us. Although an apology would not have gone amiss, and I’m not sure why they thought taking on the creation of a list of 100 books was a good idea given that they clearly didn’t have time to actually read some of their own selections, I can appreciate the attempt to change this online fight into a more positive online community activity. 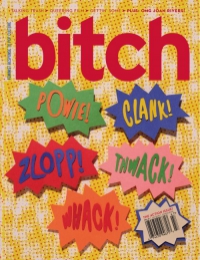 With that in mind, I’m joining the book club. In later posts I’ll report back on just how feminist I think these titles are, and on whether it’s possible to have a productive online discussion about such controversial subjects. I’d like to believe that’s not a foregone conclusion. And if you enjoy YA literature, I invite you to join me. Vote on the book club selections yourself, and then watch this space for a discussion of the books, and of the debate about them.