Book of the Week: A Nearly Perfect Copy, by Allison Amend 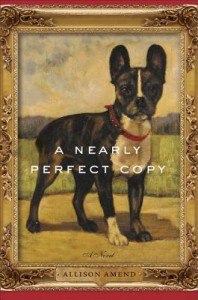 This week’s feature is Allison Amend’s new novel, A Nearly Perfect Copy, which was recently published by Nan A. Talese / Doubleday. Amend, a graduate of the Iowa Writers’ Workshop, is the author of the Independent Publisher Book Award-winning short story collection Things That Pass for Love and the novel Stations West, which was a finalist for the 2011 Sami Rohr Prize for Jewish Literature and the Oklahoma Book Award. Her new novel, A Nearly Perfect Copy, was published in April. She lives in New York City, where she teaches creative writing at Lehman College and at the Red Earth MFA.

In a recent interview with Amy Brill, the two authors discuss the role of research in their writing process, what book covers telegraph (or don’t) to different readers, and shifting between writing short fiction and novels. In response to a question from Brill about the thematic bonds between the seemingly disparate stories and characters in her books, Amend replies:

I do think there are thematic links between my pieces (even if their styles and subject matters are wildly disparate). All have to do with the notion of family—the people we choose and those who get handed to us by the vagaries of genetics. I’m interested in what people will do to obtain and maintain these ties. I also like to push my characters—how strong do their desires have to be that they’ll compromise their ethics in order to pursue them?

My process changes each time. In the case of the stories, most came from character: “What if I wrote about a _______?” The novel came from my fascination with my mother’s family’s history. Stations West is ultimately not about my family, but it is a story of the underbelly of the American west. A Nearly Perfect Copy began with what one should not begin with—a social issue, namely that of the nature of authenticity. Eventually I jettisoned that in order to tell these two protagonists’ stories. My next book is another historical novel, this one set in the early part of the 20th century. I’m a masochist!

We’re happy to announce that we’ll be giving away a copy of A Nearly Perfect Copy to three of our Twitter followers. To be eligible for this giveaway (and all future ones), simply click over to Twitter and “follow” us (@fictionwriters).