Book of the Week: Separate Kingdoms, by Valerie Laken 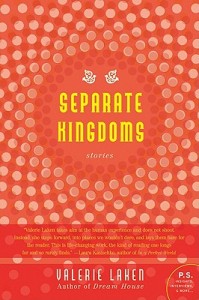 This week’s featured title is Valerie Laken’s story collection Separate Kingdoms, which we’re pleased to announce has recently been longlisted for the Frank O’Connor International Short Story Award! Laken was born and raised in Rockford, Illinois. She majored in English and Russian at the University of Iowa, then worked and studied in Moscow, Prague, Krakow, and Madison, before moving to Ann Arbor, Michigan. There, she received an MA in Slavic Literature and an MFA in Creative Writing from the University of Michigan, where she taught for several years. Her first novel, Dream House, was published in 2009. She is currently on the faculty at the University of Wisconsin – Milwaukee, where she teaches in the Creative Writing program.

In her recent review of Laken’s story “Map of the City” as part of our “Stories We Love” series, contributor Natalie Bakopoulos writes:

In “Map of the City,” a story from her new collection Separate Kingdoms, Valerie Laken portrays the life of an American college student in perostroika-era Moscow. The story is brilliantly structured—the names of Moscow metro stations head the various sections, each of which captures a new moment in time and space and thereby mimics the experience of using the subway: you descend into one station and resurface at another.

Perestroika, after all, was a time of change and restructuring, and in the early-nineties Soviet Union you might go to sleep in one sort of nation and awake in an entirely different one. “We’re in the heart of the biggest country in the world with its eleven time zones and fifteen republics, its thirty thousand nuclear warheads,” the narrator thinks. “And for today at least, nobody knows who’s in charge.” Language, too, seems to be fleeting. For instance, when the narrator learns the Russian word for solstice, she repeats the word to herself but knows that in an hour it will have vanished.

“The country no longer exists, but the city remains,” one section begins. “A country is just an idea, its borders only visible in your mind and on maps.” The story suggests maps are just ideas, too, superimposing order, logic, and stasis on an ever-changing, dynamic place. In a city like Moscow, to say you live near a certain metro stop means everything to someone familiar with the place and nothing to someone who is not. And yet it’s the streets “covered in slush,” the crowds that “dwindle and swell,” the “clusters of women” and the tall-standing statues of poets and the soldiers who peek out of the hatches of the tanks that really are the place—the place Laken masterfully evokes.

To read the rest of this story review, please click here.

Or read Peggy Adler’s 2009 interview with Laken after the publication of her first novel, Dream House.