Book of the Week: The Flight of Gemma Hardy, by Margot Livesey

This week’s feature is Margot Livesey’s new novel, The Flight of Gemma Hardy, which was published last week by HarperCollins. Livesey is the author of six previous novels: Homework (1990), Criminals (1996), The Missing World (2000), Eva Moves the Furniture (2001), Banishing Verona (2004), and The House on Fortune Street (2008). Her first book, Learning by Heart, was a collection of short fiction published by Penguin in 1986. Her nonfiction and essays have appeared in such places as The Boston Globe, AWP Chronicle, The Cincinnati Review, The Atlantic Monthly, and Five Points, as well as anthologized in such collections as The Business of Memory, Now Write!, The Eleventh Draft, and Naming the World. She has taught at Boston University, Bowdoin College, Brandeis University, Carnegie Mellon, Cleveland State, Emerson College, the Iowa Writers’ Workshop, Tufts University, the University of California at Irvine, the Warren Wilson College MFA program for writers, and Williams College. Livesey is also the recipient of fellowships from the Guggenheim Foundation, the N.E.A., the Massachusetts Artists’ Foundation and the Canada Council for the Arts. She is currently a distinguished writer in residence at Emerson College.

Livesey’s new novel is a modern (1960s) take on Charlotte Brontë’s Jane Eyre. In the introduction to his recent interview with Livesey, contributing editor Steve Wingate describes the literary relationship between the books. He writes:

Though the resemblances are close, including a five-part structure, they are not ponderous or strained. One could labor over the similarities between the characters, such as Brontë’s troubled gentleman Mr. Rochester and Livesey’s troubled gentleman Hugh Sinclair, or Brontë’s ill-fated schoolgirl Helen and Livesey’s ill-fated schoolgirl Miriam. But such comparisons are unnecessary when taking in The Flight of Gemma Hardy, and looking for them instead of letting Livesey’s tale live on its own merely distracts from it.

The book’s eponymous heroine Gemma, orphaned spawn of a Scottish mother and an Icelandic father, is in trouble from the start. Thrust into her aunt’s protection when her beloved uncle dies, she is treated as a servant girl and worse. The first movement of the novel, which covers Gemma’s escape from her adoptive family, filled me with unease over her physical and emotional safety in ways I did not expect. She is also a spooky, elvish girl, tending toward a receptivity to the supernatural that Livesey calls “second sight.” The first impression one gets of Gemma is of someone who will be frequently on the run, a delicate but scrappy survivor with no real place in the world who will land on her feet and create one.

In this interview, Wingate speaks with Livesey about such things as keeping the imagination fresh, the role of setting in her work, and learning from Brontë. In response to a question about “borrowing” from her own history and background, Livesey replies:

I knew as I embarked on the novel that I would be making use of my difficult stepmother and the grim boarding school I attended for four years. Only as Gemma began to grow up did I discover that I would be drawing on my deep sense that books and exams were a way to escape my present life. As for the role that my romantic life played in my creation of Gemma’s, I think that’s best left to the reader’s imagination. 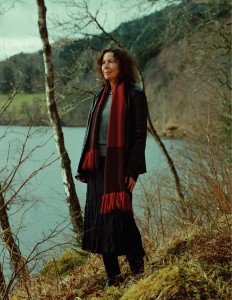