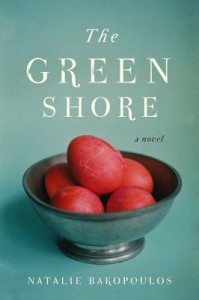 This week’s feature is Contributing Editor Natalie Bakopoulos‘s debut novel, The Green Shore (Simon & Schuster), which releases today. Set in Athens and Paris during the military dictatorship of Greece (1967-1974), the book traces one family’s experience of love and resistance as they negotiate the rule of the Colonels and the fallout from the junta. Bakopoulos holds an MFA in Fiction from the University of Michigan, where she now teaches. Her work has appeared in Tin House, Ninth Letter, Salon, The New York Times, and Granta Online, and received a 2010 O. Henry Award, a Hopwood Award, and a Platsis Prize for Work in the Greek Legacy.

In a recent interview, the author talked with Stacie Williams about finding part of herself as a Greek-American when writing the book, the intersection of imagination and history, and longing for a place. When asked about the everyday experience of Greeks during the dictatorship, she replies:

The truth is that under any regime people still have to live, to go about their business. They fall in love and go to school and work and make dinner and experience jealousy and rage and sadness. Anna says in the book that she knew what drove the dictators mad was that no matter what they tried, they couldn’t control what went on in private. And this is where people might have found their freedom.

We’re giving away a copy of The Green Shore in two weeks to three of our Twitter followers. To be eligible for this giveaway (and all future ones), simply click over to Twitter and “follow” us (@fictionwriters).

Hurts and Old Feelings: An Interview with David James Poissant