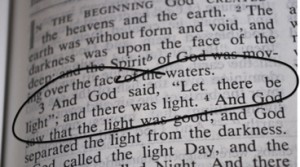 Over on the Wall Street Journal’s newly-launched Book Review, Alexander McCall Smith laments the pitfalls of overwriting in “Block that Adjective!” Smith writes:

Concise prose knows what it wants to say, and says it. It does not embellish, except occasionally, and then for dramatic effect. It is sparing in its use of metaphor. And it is certainly careful in its use of adjectives. Look at the King James Bible, that magnificent repository of English at the height of its beauty. The language used to describe the creation of the world is so simple, so direct. “Let there be light, and there was light.” That sentence has immense power precisely because there are no adjectives. If we fiddle about with it, we lose that. “Let there be light, and there was a sort of matutinal,* glowing phenomenon that slowly transfused, etc.” No, that doesn’t work.

Of course, stylistically, some of my favorite writers – Michael Ondaatje comes to mind – are mellifluous with their modifiers. It can be as difficult to write truly good ornate prose as spare. But Smith’s point about the King James Bible reminds me of another author of eloquent, lean prose I’ve always admired: Cormac McCarthy. When he uses an adjective it jumps off the page and smacks you around a little. Who do you admire for their restraint, or perhaps for ignoring this caution altogether and proving that bold is beautiful?