The following post was written by Josie Keenan, Emily VanDusen, and Drake Misek, all interns at Fiction Writers Review through the Undergraduate Research Opportunity Program (UROP) at the University of Michigan.

Emily, on the pros and cons of the transmedia: 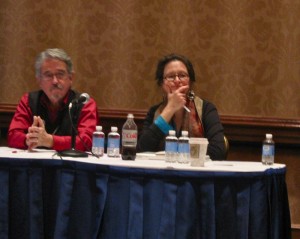 To start off our second, and regrettably final, day of the conference, the three of us attended the panel discussion “From the Page to the Small Screen: What the Information Age Means for Us.” Although the panelists were all involved with poetry, the main goal of the discussion was to make sense of the transition from printed literary journals and anthologies to an online community of shared information. The panelists included Brian Brodeur, Keith Montesano, Andrew McFadyen-Ketchum, Mary Flinn, and T.R. Hummer. The combination of Flinn’s and Hummer’s experience and the other panelists’ relative youth and neophyte status made for an interesting discussion of what happens when print media is translated to the small screen. Closely related with such aspects as design and audience in such a transition is the use of new, or simply different, media to supplement pure text.

Particularly intriguing was the idea of how voice is affected not only in putting one’s work online, but also in coupling it with videos, images, or music. T.R. Hummer gave an especially moving narrative of the transmedia world as he gave us his background as a poet and a musician. In true poetic style, he described to what he called the “white monolith,” a machine he encountered in childhood that acted as both a scale and a horoscope. To Hummer, this machine was the first object that awoke him to the world’s wonder and possibility, and that gave him an introduction to the scope of meaning. Later, he developed a similar fascination for the saxophone, which he described as giving him a “saxophone voice” while simultaneously robbing him of his own voice. Picking up the musical instrument, he explained, was akin to dividing one’s voice from oneself, providing the “gift” of music while also inflicting the “wound” of losing the raw and imperfect quality of the soul. Technology, he insisted, works the same way as music to humans, providing us with tools to develop our voices while taking us away from where we came from—our ancestors and their traditions. Besides being poetic and thoughtful, Hummer’s story provided the panel with valuable insight about the possibility of digital media to both create and destroy. Consideration for this delicate balance, therefore, can make the difference between an effective media source and one one that is superfluous and overbearing—an important message for literary organization that provides multimedia tools and resources for online use.

Josie, on the role of communities in an online world: 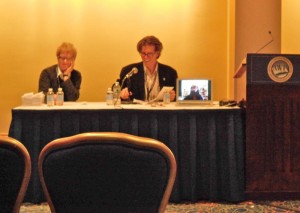 At the panel “Face to Face Communities in the Age of Facebook,” Emily and I heard Curtis Bauer, Elaine Sexton, Oliver de la Paz, Camille Dungy, and Ross Gay discuss how communities are evolving, transforming, and fundamentally changing the nature of interactions on both an individual and community-based level. Appropriately enough, Dungy joined the discussion from San Francisco via Skype and spoke to technology’s ability to make communication faster and easier. Removed as she is from the east coast literary circles, she relies on online forums, Google Docs, and interactive software to remain in touch with her literary compatriots. As with books, she feels technology can be a unifying, connective force: “all the intimacy you want without the shared saliva.” Virtual communities can foster physical communities and bridge otherwise insurmountable distances. As a counterpoint, Gay supports communities in general, but has not joined “the Facebook” and worries about the effects of this seemingly boundless access to one another. What will it do to our senses of self, he wondered, to always be connected to each other? Gay argued that this omnipresent network of names and faces, some of whom we love and some of whom we’ve never met, does not allow much space or time for solitude or peace of mind.

The effects of space and time also played into the conversation, as the internet is in some ways removed from both: its space is virtual, and conversations in its ether exist in perpetuity. How does this absence of space and time affect interactions and the existence of community? All panelists agreed that in order to create a sustainable environment, members of the community must feel some sense of responsibility, referencing Delmore Schwartz’s story “In Dreams Begin Responsibilities.” This responsibility is a commitment to thoughtful engagement, so that the community can not only last but also have a meaningful existence. Sexton and Bauer, both of whom are avid chapbook makers, also argued for in the benefits of engagement with physical objects, of having a tangible connection. The panel ended with this question of how to make the virtual real, of how to make our online existences relevant and important in our actual lives. This is a question not easily answered but an important one to ask, and one we are researching and exploring at Fiction Writers Review.

Drake, on how print journals are making the jump to the internet: 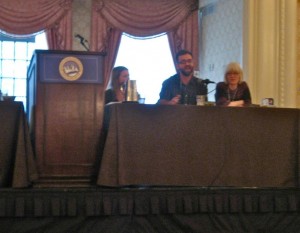 While Josie and Emily attended the Facebook panel, I headed to the nearby Omni Hotel. On the bottom floor, in the spacious Empire Ballroom, the panel “Change or Die: How Established Print Journals are Adapting to Life on the Internet” was held with a surprising amount of empty chairs. Perhaps people just didn’t want to make the journey, but they missed an enlightening discussion by the editors of five university-associated literary magazines.

Amber Withycombe, of UNLV’s Witness, moderated the panel, supplying guiding questions and topics to develop a picture of the print-to-digital issue. In her introduction, Withycombe asserted that, without a doubt, the move online necessitates reinvention. All of the panelists were involved with that reinvention, including Christina Thompson and Laura Healy of the Harvard Review, Tyler Meier of The Kenyon Review, Michael Nye of The Missouri Review, and Andrew Ciotala, of Bucknell’s West Branch.

Withycombe began the panel by asking, “Why go online?” The panel’s consensus: the digital format is necessary in the present, alongside print, but may even eclipse print in the future. The digital versions of the lit mags represented were launched only in the past few years, and all of them stand as an additional publication to the print edition. This new area of publication is so cheap that it barely affects the magazines’ budgets, except for an increased amount of contributor payments. The amount of submissions hasn’t changed much either, but more works are being accepted—great news for emerging writers!

Between these two formats of publication, a sort of “prestige gap,” has formed, as Ciotala and Thompson put it. In a few instances, writers have requested their work not be published if it is accepted only for the online lit mag. Many writers also voice a clear preference to be published in print, instead of digitally. But I wonder why. Online, we’ll be read more, and our work will be archived online. Wouldn’t it make sense for emerging writers to favor the emerging medium? This, too, is an important question that we at Fiction Writers Review must tackle.